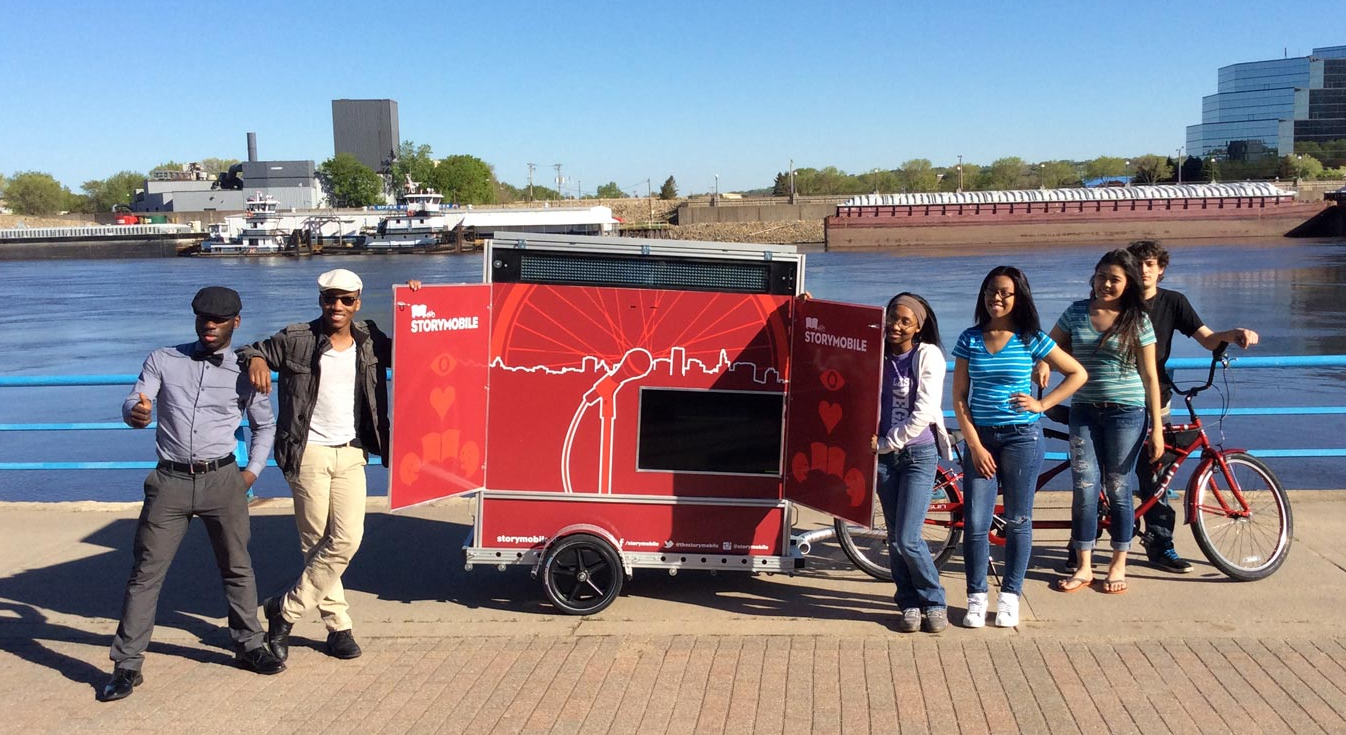 We have been busy this summer. We have only just begun. You might think we would be all tuckered out, but we have a great bunch of young people pulling the Storymobile, fueled by a decade’s worth of your stories, so our sprint to September’s Book Release Party (keep your eyes open for details in coming days) might leave us winded but nicely traveled. Here are a few ideas on where you can join our trek.

It’s Lowertown Reading Jam Time again. The series has been especially strong this year, which says a lot for this performance series that is gaining more and more followers with every show. This month, on Wednesday, June 25, we will once again be at the Black Dog Cafe and Wine Bar for “Things we have given up, for what and why?”

Ben Weaver is a songwriter, poet, bicycling advocate and dad. As he says in his poem “Ragged Ass JoY,” “If there is a corrective action / it is to always ride a bike / breathe more fresh air / use your hands to make things / go wandering, then go home and tell about it.” Consider us home, a place where stories can rest. Ben has invited several other artists to do likewise. Heid Erdrich is a Reading Jam veteran who recently curated this season’s December show. Heid is author of four poetry collections as well as her new book, Original Local: Indigenous Foods, Stories, and Recipes from the Upper Midwest. Kara Olson is a legal advocate in the Immigration Law Project at Mid-Minnesota Legal Aid. She recently finished her MFA at Warren Wilson College and is a Jerome Fellow. Brad Zellar is a bit of a Renaissance man with an appropriate perspective on baseball’s place in the American story. His extensive work includes serving as a senior editor for City Pages, The Rake and Utne Reader. Brad is author of Suburban World: The Norling Photos and other collections that put photography and art in creative context.

As usual, our emcee will be the rocking and funny Robert Karimi, fresh off his World Cup whirlwind. The Black Dog is at 308 Prince Street in Lowertown. The action starts at 7:30 p.m. Come see what we’ve given up and maybe what we get. 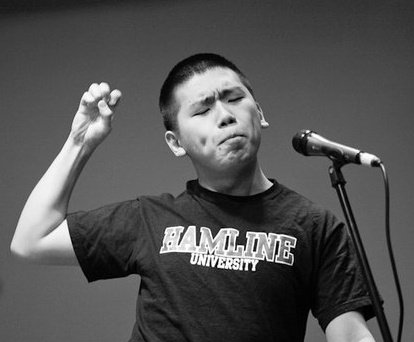 Soul Sounds Open Mic is back this week with Kevin Yang. On Thursday, June 26, join the crew to workshop a piece of your own, listen to what our wordsmith peers have on their minds, in their lives and in their neighborhoods. Get great direction from THE Tish Jones and hear Kevin Yang. Kevin’s acclaim has been affirmed as he represented Minnesota at the Brave New Voices Spoken Word Festival in 2011 and the Hamline University Poetry Slam at the College Unions Poetry Slam Invitational in 2012 and 2014. Kevin writes about pop culture and unraveling the intersection between being an American and being Hmong. We get started at 6:30 p.m. at Golden Thyme Coffee Cafe, 921 Selby Avenue.

On Friday, June 27, Saint Paul Almanac takes over the studios of Twin Cities Public Television. For the past month, TPT’s Rewire has run a series of innovative hour-long shows on Friday nights called TV Takeover. TPT asked us as what they describe as “one of the most inventive Twin Cities arts organizations” to create an “eclectic, artsy, television-making event.” We have a great lineup. Our episode is themed “Where Are You Going?” 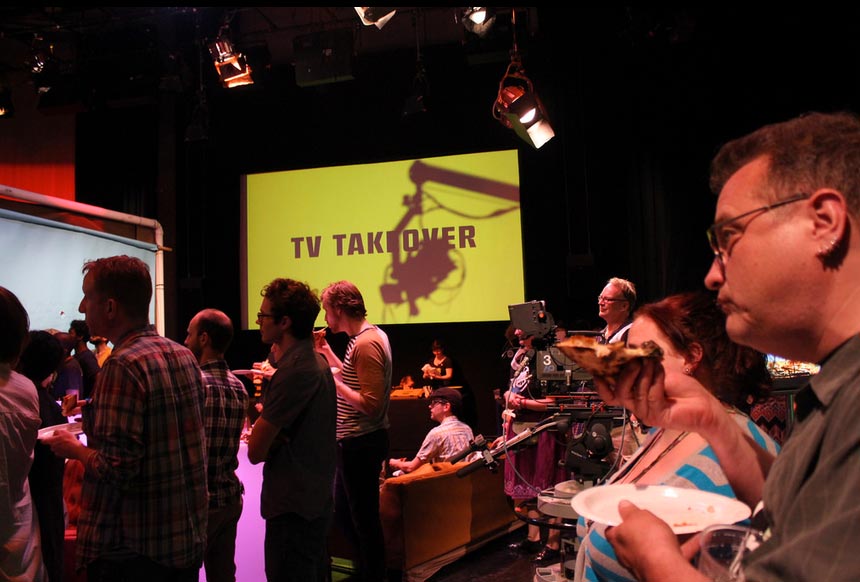 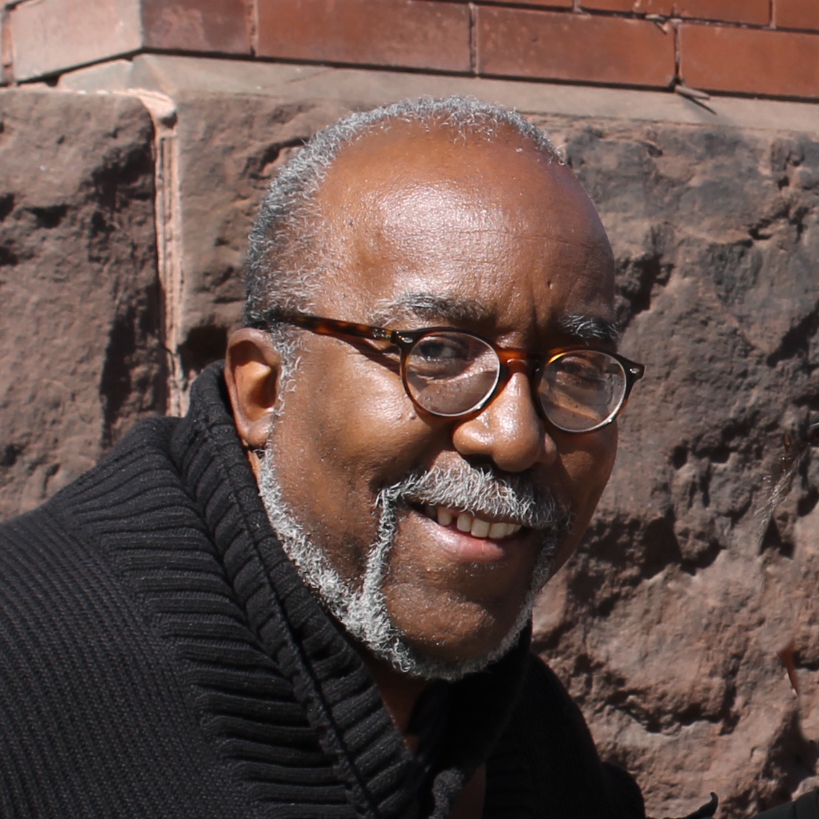 You might be asking, just what happens at a TV Takeover? Well, whatever our creative minds can come up with. There are several ways you can take part! The show airs on Channel 2 at 9 p.m. You can join the party down at the studios beforehand, starting at 7:30 p.m., in Studio A. The party would not be complete without food and drinks by Republic, Bryant Lake Bowl, Two Gingers, Icehouse Restaurant and Indeed Brewing. Also, Almanac’s Storymobile will be at the center of attention.You can also check out our photo booth, live music, Big Prints interactive map, writing lesson station, chalkboard making, and a live mural by Ta-coumba Aiken.

All this will be followed by a great show that will showcase some of Saint Paul’s best stories and poems by some of Almanac’s best contributors. Featured artists will include Karen Karsten, May Lee Yang, Patricia Anita Young, Nimo Farah, Adrian Schramm, Mike Finley, Donte Collins, Louis DiSanto, Martin Devaney, Elena Cisneros and Saymoukda Vongsay.

If you can’t join us at in the studio, you can tune in on the television and follow on us on social media. Be sure to check out #TVTAKEOVER, follow and contribute.

If you think you can join us GET YOUR TICKETS NOW RIGHT HERE.

This might sound like a lot, more than what could possibly fit into the space of a party and TV show, but that is what Almanac does.

Other dates for Storymobile this week: 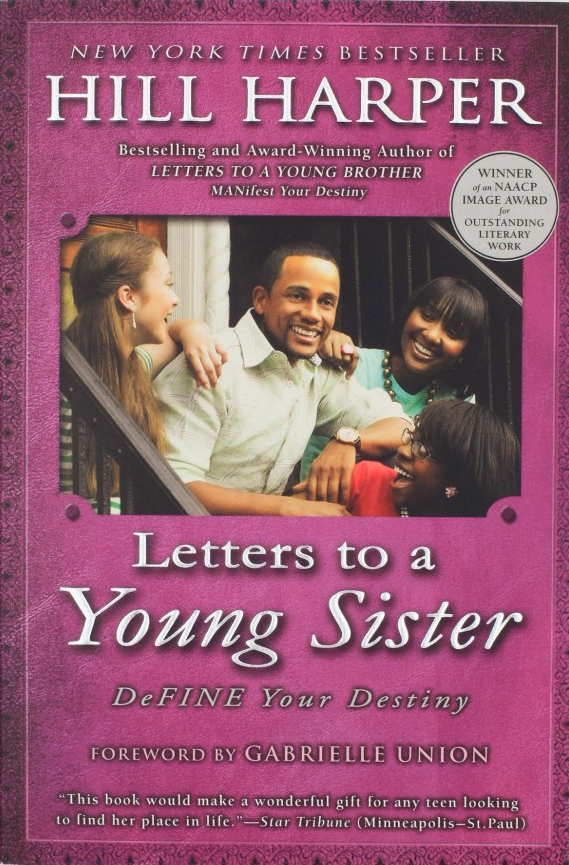 On Tuesday, June 24, the Rondo Community Outreach Library will host a discussion of the book Letters to a Young Sister by Hill Harper. This event is sponsored by our friends at The Givens Foundation for African American Literature and features panelists Shannon Gibney and retired educators Beverly Cottman and Dr. Rosilyn Carroll and moderator literary scholar and PhD candidate Davu Seru. Harper’s work addresses the struggles of African American women, and this discussion will examine Harper’s work and those of others as forces addressing these struggles, both historically and today. The Rondo Library is located at 461 Dale Street North. The event begins at 6:30 p.m. 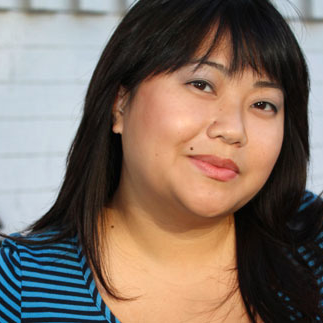 Are you a teen who is interested in being a playwright? The Saint Paul Public Library is offering a great opportunity: Get Paid to Write, Direct and Perform a Play! Local poet, playwright, performance artist and Almanac Lowertown Reading Jam veteran May Lee-Yang
will lead participants on a journey to explore stories and then create and produce an original play in a multi-session series of workshops, culminating in two public performances. Participants can meet new people and gain valuable experience. It requires a commitment of two hours per week (Wednesday evenings, 6–8 p.m.) from July 7 through October 10, and participants meet at the Arlington Hills Community Center. May is a great artist, teacher and collaborator. In the Almanac tradition, participants will be paid a stipend of $100 for full participation at the end of the program. If you are an interested teen or know someone between the ages of 13 and 19 who might be interested, check it out here and click on “Fill out this application form to apply.” Do it soon because the deadline for application is June 30.

It is a big music week in Saint Paul, with a lot of variety in music genres and strong performers. Music in the Parks continues as does Como Zoo’s Groovin’ in the Garden and Music in Mears. But wait, there’s more. 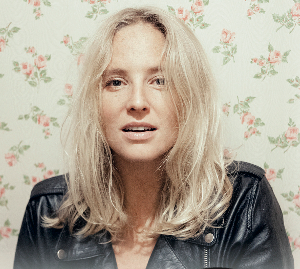 On Monday, June 23, Lissie takes the stage at the Fitzgerald Theater. The singer/songwriter and pop/folk artist will be backed by Field Trip. Her debut album, Catching a Tiger came out in 2010 with much acclaim. Her most recent album is Back to Forever. For more details and tickets check here. The show begins at 8 p.m. The Fitzgerald is at 10 Exchange Street in Downtown.

This week, the Capital City hosts the first of two jazz festivals this summer. The Twin Cities Jazz Festival starts on Thursday, June 26, at various locations in Lowertown and other locations along the Green Line. With dozens of venues and even more performers in an array of styles, it is more music than you can fit into an extended weekend, but enough to satisfy whatever interest you have. Thursday is “Jazz Night Out” in various clubs around town. This is followed by six hours on Friday and a full day on Saturday, with music on outdoor stages. If you want to know artists, times, venues and other logistics, check here. Or you can just show up in Lowertown over the weekend and follow your ears. Events start on Thursday at 6 p.m., Friday at 4 p.m. and Saturday at 2 p.m.

This show caught my eye: “A timeless tale: Girl meets boy. Boy meets girl. Girl turns out to be a zombie,” according to the publicity. The Historic Mounds Theatre brings in its share of off-beat shows, as well as being a great venue for other music and shows. It is currently hosting the run of I {HEART} BRAINS.” This locally written, produced and performed show features scary exes, the occasional murder and a brain-eating spree. Humor and music are thrown in for good balance. The remaining shows are on Thursday the 26th, Friday the 27th and Saturday the 28th. The escapades begin at 7:30 p.m. The theater is at 1029 Hudson Road on the city’s East Side.

This is Saint Paul and there is so much more. Find what’s fun for you at the Almanac arts calendar. Have a great week. Take the train, if you get a chance.