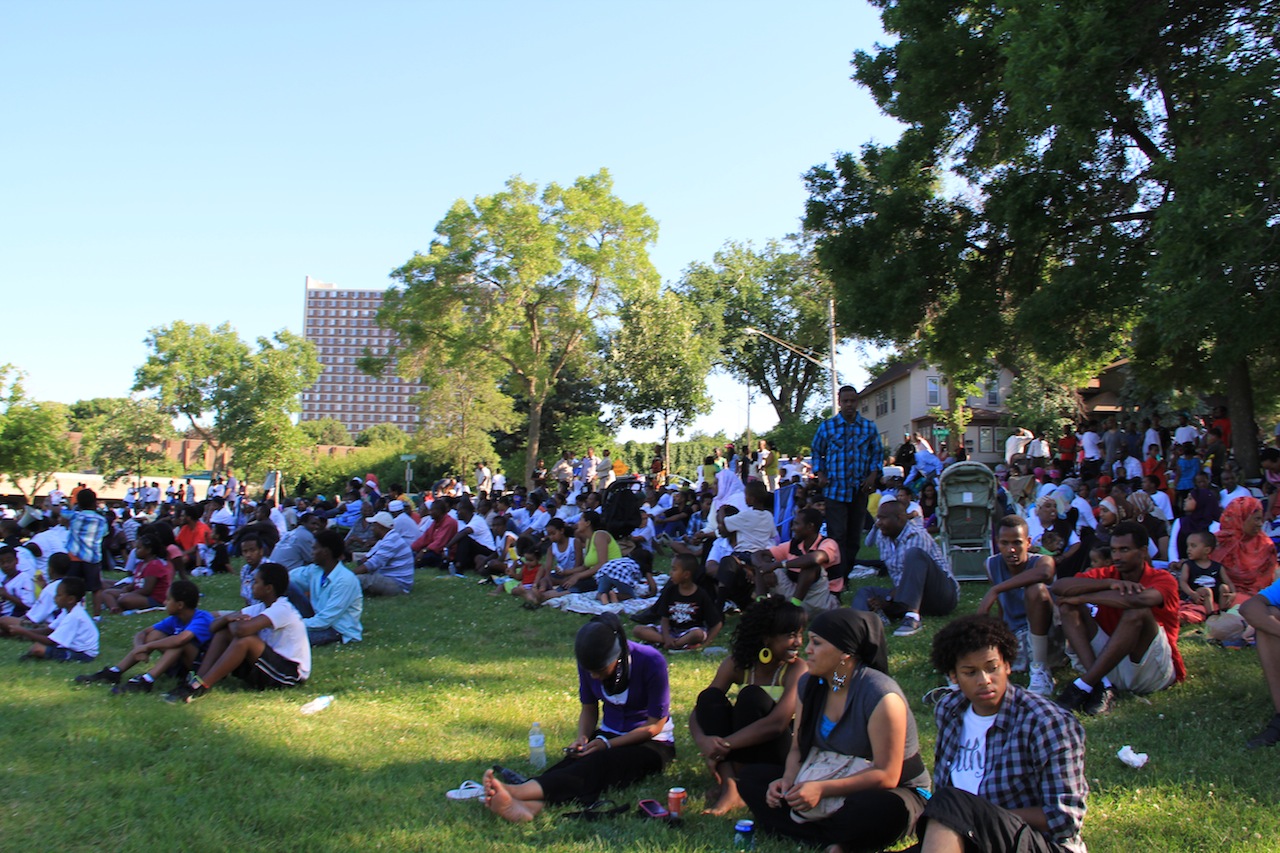 Every year on the Fourth of July, Minneapolis’ Riverside Park turns into party central for the Twin Cities Oromo community. They’ve gathered there for about 18 years, said Hassen Hussein, executive director of the Oromo Community of Minnesota. The St. Paul-based nonprofit provides social services to ease the transition of Oromo refugees from the Horn of Africa, and also works to educate the Twin Cities about the Oromo culture.

Because you can’t reserve space at Riverside Park, Hussein and a group of volunteers start setting up tents, grills, and sports equipment at 4 a.m. The party goes on till 10 p.m. “How many people come depends on the weather,” said Hussein. He estimates that there are more than 30,000 Oromo in the Twin Cities, which some say makes it the largest Oromo population outside of Africa, earning the nickname “Little Oromia.” According to Hussein, sometimes nearly 5,000 people show up for the Fourth of July event.

“There are women in hijabs and women in shorts,” said Hussein. “We celebrate our differences.” Hussein said that many families have come from refugee camps and the yearly celebration of freedom is particularly meaningful to them. “It’s a hybrid celebration,” he said. Along with traditional food, “We grill American food – hamburgers, hot dogs. We have adapted.”

This year the picnic will occur near the end of a week-long celebration that kicked off on June 29 with the Oromo Youth Summit, an annual event that brings together Oromo youth from around the world, and ends on July 6 with two concerts and a closing ceremony. In between there are concerts, the Miss Oromo beauty pageant, and perhaps the biggest draw: the week-long soccer tournament held on the fields of Washburn High School. Sixteen teams will compete, including the defending champion, Oromia 11 Stars, a Twin Cities team. (For a schedule of the week’s events, go to gadaa.com)

“This is the largest gathering of Oromo outside of Africa,” said Mohammed Ademo, a former Twin Cities resident who is co-founder of OPride.com. “It’s not political. We share food, laugh, talk about back home. The kids run around and have fun in an open park. Adults run into friends they haven’t seen for years.”

The soccer tournament may be the biggest draw, but Hussein and Ademo agree that one of the concerts may be the most unforgettable of the week’s events. Dr. Ali Birra, the “Michael Jackson of Oromo music,” is celebrating 50 years of performing with a concert at the Ramada Plaza on July 4 at 8:00. Dr. Birra is expected to retire from performing soon, and so the concert is especially meaningful.

Article
Michele St. Martin
Do NOT follow this link or you will be banned from the site!
X