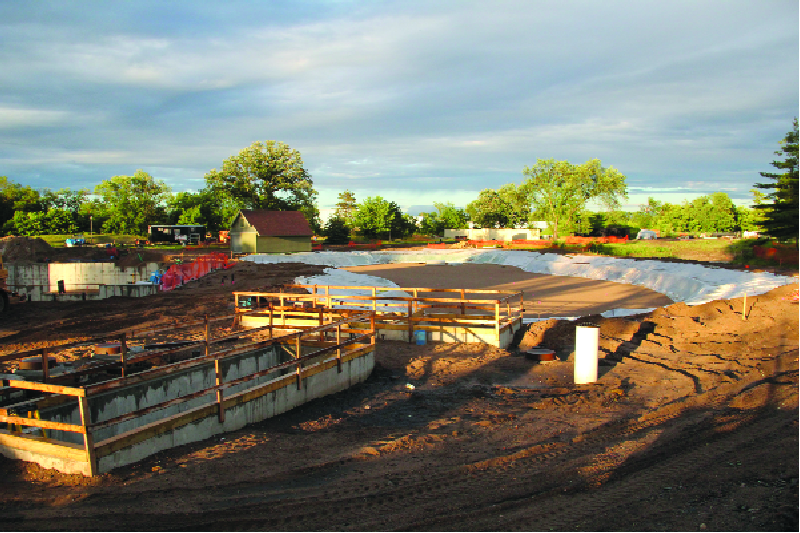 (Photo by Alex Schlee) Foundations of the basin are in place; a liner surrounds where the edges of the basin will be. The center will soon be filled with filtration pipes, which will run underneath regeneration plants that will clean the pool’s water.

The center of Webber Park lies bare, a large portion of land fenced off to the public while construction crews lay the groundwork a new, naturally-filtered swimming pool and the changing house. Groundbreaking on this project began last summer, and while progress has been made, the forces of nature have ensured that it has been an arduous, slow process.

The park’s current major overhaul has been underway for roughly a year, and many community members are now wondering how much longer this first phase will take. A long winter and unprecedented rainfall throughout spring have held contractors back, forcing the Minneapolis Parks and Recreation Board to push the forecasted completion date from August 1 to Labor Day.

The park board staff say they initially meant to communicate these changes in schedule to the community sooner, but the regular updates they had planned fell behind.

“We usually have a good track record,” said Dawn Sommers, the park board’s communications director. “But we dropped the ball here. We did not do our typical standard keeping people informed.”

According to Sommers, regular updates fell behind and were eventually phased out. A meeting was held on Monday, July 14 for the Minneapolis Parks and Recreation Board to explain what went wrong, as well as to outline how they plan to get back on track and apologize for their lack of communication to North Minneapolis residents in attendance.

Harsh weather didn’t completely bring progress to a halt, but slowed work greatly, drawing out the project’s conclusion until the end of this fall, according to MPRB Construction Manager Jon Duesman. Some parts have already been completed, including pool and an expanded parking lot. The soccer field is finished. The next goal is to complete the rest of the pool and the regeneration basin to go with it.

As a naturally-filtered swimming area, Webber Park’s pool will not need chemicals to stay clean. Instead, water will be cycled through the basin, where plants filter and clean the pool’s contents. These kinds of artificial swimming ponds have been popular in Europe, but have not yet caught on in the states. Webber Park’s will be the first public installation in North America. The pool, along with the small changing house structure to be built along its shore, will double as a skating rink and ice house in the winter time.

According to Duesman, the pool needs to be finished by Labor Day to allow time to winterize the structure and guard against yet another oncoming Minnesota winter. With the Labor Day deadline in mind, Duesman hopes the whole project will be completed and ready for the snow and ice by November. If all goes according to plan and the regeneration basin is completed and circulating water by mid-fall, then Duesman expects that the pond will be ready for ice skating, though it will have missed prime swimming season.

In total, the project to renovate Webber Park is a seven million dollar project, with funding coming from the City of Minneapolis, a Hennepin County Youth Sports grant, and the North Mississippi Regional Park. While the project is more or less fully funded, further donations from community members were encouraged by several board members during the meeting on the 14th.

Due to the record levels of rain this spring, there have been some worries that the trending delays may continue, pushing back the completion date even further. Duesman assured attendees that for the safety of the construction, the pool needs to be ready for this winter, so further delays are not much of an option. During the pool and reservoir construction, other assorted aesthetic improvements around the park are slated to continue, including new lighting systems, park benches, and picnic tables. If push comes to shove, these minor improvements could be pushed back to be finished next spring, but Duesman was quick to insist another deadline will not be missed.

“When this is open is not as important as how well it will be when it opens,” said Roberta Englund, Executive Director of the Folwell Neighborhood Association during the presentation’s closing remarks.

Further information on Webber Park’s progress and the link for subscribing to updates can be found at the Minneapolis Parks and Recreation Board’s Web page, at www.minneapolisparks.org/default.asp?PageID=1286.