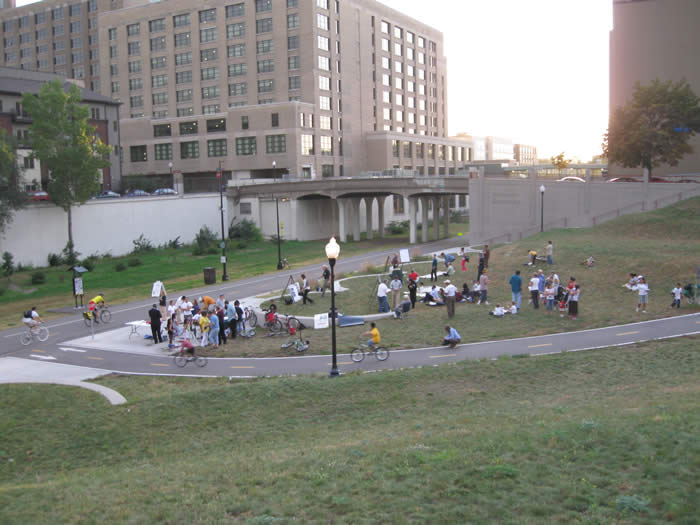 The CEPRO property is the site of the former grain elevators along the Greenway between 10th and 11th Ave and 28th and 29th St.  A lot of discussion went into that property [since demolition in March 2004 including a series of 3 Neighborhood Workshops Oct 27th Oct 27th , Nov 17th 2004, and Jan 19th 2005 plus arts initiatives].  It’s disposition affected the Midtown Block Club in a major way.  The block club lost neighbors who had spent a lifetime in their home, others who had been in their homes over 50 years, a husband and wife who did major work with First Nation’s both in town and among area reservations, the block club lost a much needed for-profit business that supported the community and it lost a charter school.

The members of Midtown Block Club were and to some extent still are a close knit community, formed and coalesced by a couple of formidable women who gathered to protest against prostitution, crimes against women and quality of life issues.

As a block club, they recognized that no one wanted responsibility for the CEPRO site.   No one had the resources.  The Greenway Coalition wanted it entirely green, but no willingness to manage it and no financial resources to support it.  Hennepin County did not have resources to manage a park, although they own the site.  The Minneapolis Park Board wanted nothing to do with it.  Minneapolis Police and Park Police had no interest in nor resources to patrol it.  Midtown Block Club agreed in principle with greenspace, but not without some anchor, or ownership.  The members of the club offered numerous suggestions such as small retail strip along 10th Ave or a small row housing development similar to or perhaps even in partnership with the PPL condos built directly across 29th St, to augment and anchor the greenspace, thereby giving it a “sense of place”.  However, particular individuals and the then sitting Midtown Phillips Neighborhood Association Board were able to circumvent the concerns of the immediately adjacent residents.

The room was able to be packed for Midtown meeting the night of the vote with people who had, up to that point, never been seen before.  They were legally residents and qualified to vote but ill or non-informed about the property and the concerns of the immediately adjacent residents and it became yet another manifestation of a single person’s vision and the process existing at the time was effectively used to accomplish that vision however misguided.

It has been discovered that a project manager entered into contracts with city and county, whereby the county retained ownership, Midtown Neighborhood Homeowners Association assumed control of and responsibility for the space, and the city supported it thru the NRP process.   A couple of years later and a bit over $160,000 of Midtown’s NRP funds, the community has the current iteration of CEPRO.  It has been planted twice with flowers, wild grass and other plants by Applied Ecological Service, Inc.  (Some advocate for litigation concerning these funds since the contract entered into in good faith has been violated and not complied with).  This firm is located in Broadhead WI.  It is interesting to note, that Stephen Kung of Urban2Oasis, Inc; at the time not only submitted proposals, but lived in the VERY immediate vicinity to the CEPRO property (Next Door).

Since its completion, it has become a site for drugs, for the consumption of alcohol, random sex acts, dumping of garbage and still no one to cares for it.  It can even boast a murder.

Beginning roughly six months ago, some residents of the Midtown Block Club had enough and began agitating for change.  Had this not happened, nothing would have been done. No one knew to do it!    Apparently, everyone assumed it was someone else’s responsibility.  Only those people living around it even had a clue that it was the problem it is.

After some lengthy discussion and email exchanges, an idea was vetted for an outdoor cross-fit gym.  For those who do not know, CrossFit itself is defined as that which optimizes fitness (constantly varied functional movements performed at relatively high intensity). CrossFit is also the community that spontaneously arises when people do these workouts together.  The outdoor public gyms began in Santa Cruz, CA in 1996 by a man named Greg Glassman.  Since then, the sport has grown and expanded and become one of the single most popular fitness regimens in America.

It was been the subject of a CBS segment focusing on the clubs in Chicago.  CBS said “CrossFit is growing nearly as quickly as MMA (mixed martial arts) did when it first hit the fitness circuit. The idea of a ‘hardcore’ workout that is adaptable to any individual regardless of age or current fitness level has led droves of former couch potatoes to the gym, or ‘box’ as crossfit gyms are called. The boxes are usually no-frills warehouse or garage-type locations and the workouts are reportedly grueling and addicting.” It can be done individually or as a group.  It encompasses tractor tires, cycling, running, kettlebells, and aspects of parkour, ropes, bars, rings, walls, and balance; nearly anything you can imagine that works your body.  It can be as complicated or as simple as your imagination can make it.

Given the CEPRO sites close proximity to the Greenway and the health conscious users of trail as well as its proximity to the Midtown YWCA it seems like a match made in heaven. Already, sponsors have collected e-mail addresses for nearly 100 people who not only support the concept, but are eager to use it.  There are 2 amateur rugby teams interested, a soccer team, and a weekend cross-fit group.  Likewise, the U of M Parkour Team has expressed excitement about the possibility.  West Phillips and the Nokomis neighborhood organization as well as the Minneapolis Bicycle Coalition expressed a desire to be kept in the loop as the idea progresses.

The space is large enough to not only include the Cross-fit gym, but also Tai Chi, yoga and much more.

This is a great opportunity to make a destination site in the Midtown Phillips Neighborhood.  A site that takes a tragedy and turns it into spectacular win.  We hope you will agree.  The city, county and neighborhood association are going to move the CEPRO through the normal process.  That could result in anything, or nothing.  For that reason, we are looking for people to help move this idea through the process, attend meetings, make the “Fitness for CEPRO” voices heard.

If you would like to be added to the e-mail list and are willing to be a part of this project or simply support it, please e-mail retterr@me.com.   We get so excited when we think of this.  It would be new, unique, destination oriented asset to Midtown Phillips that would be unique to the city!