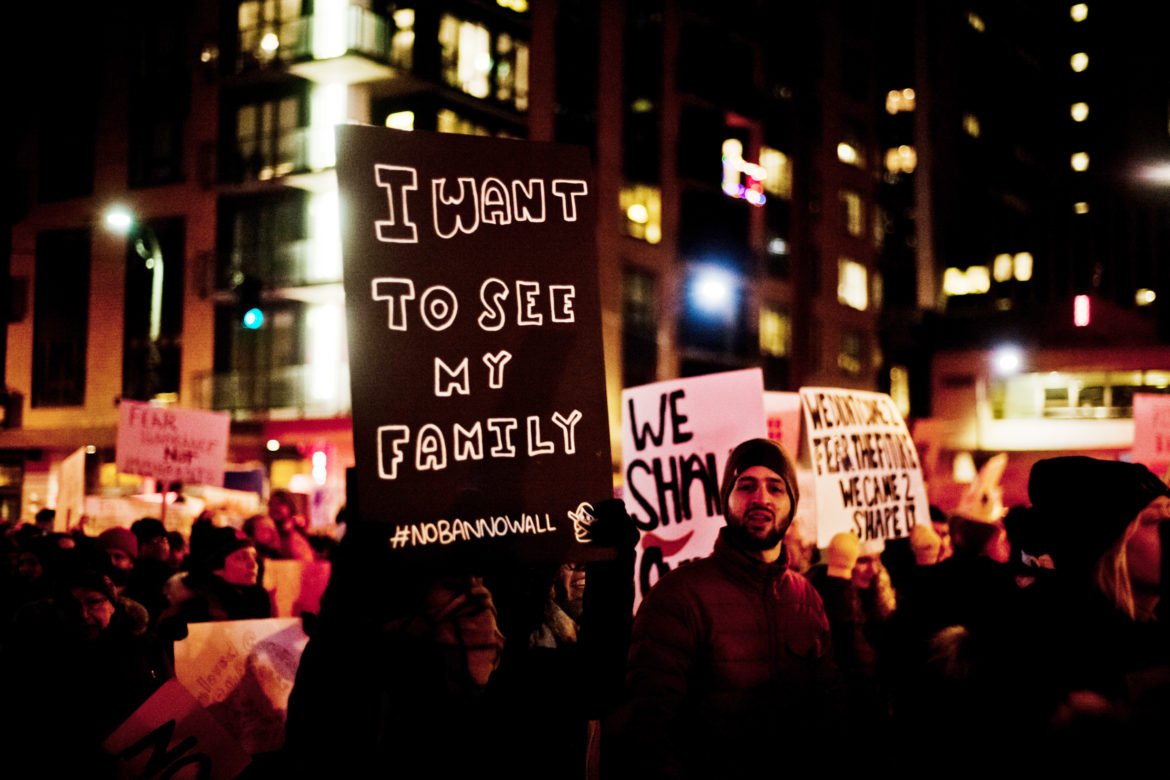 Protesters march in the Speak Out Against Muslim Ban rally on Jan. 31, 2017. The rally started at the federal courthouse in downtown Minneapolis and drew more than 5,000 people. Photo by Uche Iroegbu.

[UPDATE Feb. 5, 4:52 p.m.] On Saturday, the Department of Justice filed an emergency appeal to reinstate the ban halted by a federal judge. US Court of Appeals in San Francisco denied the motion.

[UPDATE Feb. 3, 8:11 p.m.] A federal judge in Seattle has halted the ban by granting a temporary restraining order on the grounds that the ban targets Muslim immigrants, in violation of their First Amendment rights.

Within one week of taking office, President Donald Trump issued an executive order banning refugees and immigrants entry to the United States from at least seven Muslim-majority countries. An estimated 500,000 people are anticipated to be caught in the crosshairs of the ban bringing chaos to the already complex American immigration system.

On Jan. 31, the Council on American-Islamic Relations-Minnesota (CAIR-MN) hosted a community forum explaining the implications of the ban. Collected here is what the panel of experts was able to share. Twin Cities Daily Planet will update this article as more information comes in.

“We can’t give you an answer today and be certain about it. Even what you heard last week may not be true now,” said John Keller, executive director of the Immigrant Law Center of Minnesota.

WHAT THE EXECUTIVE ORDER SAYS

HOW TO PROTECT YOURSELF

The ban and all of its directives may be overwhelming, but immigration lawyers nationwide are trying to intervene quickly. On Jan. 28 a federal judge filed a restraining order, within 24 hours of the ban, which prevents folks with valid visas from being detained at airports.

But the restraining orders are limited and there are still reports of immigration and border patrol officers ignoring the injunction.

“We have had reports that people have not been allowed to board planes from Somalia, despite valid greencards,” said Jaylani Hussein, executive director of CAIR-MN.

If you or a loved one are traveling and are detained, whether or not you are a citizen of the U.S., you have the right to a lawyer. Insist upon having a lawyer present before answering any questions. Do not sign anything that is presented to you.

There are immigration attorneys waiting in-person at nearly every international airport in the U.S. who are available to help should you or a loved one be detained, Nelson said. In the Minneapolis-St. Paul airport, they have stationed themselves at the international arrivals gate. However, Minnesota may not be your first port of entry on U.S. soil if you are returning from travel abroad.

“There’s no systematic way [yet] of getting a hold of the attorneys at the airports. Tell your loved ones to ask for an attorney,” Keller said.

With the restraining order in place, lawful permanent residents and visa holders should be able to enter the U.S. However, there are steps you can take to better ensure your safety.

IF YOU ARE A U.S. CITIZEN

If you have a valid U.S. passport, if you were born in the U.S., or if you are a naturalized citizen, even if you are a dual citizen with the U.S. and hold a passport from a country named in the ban, you should be safe to travel internationally.

“I don’t want to be part of scaring people who shouldn’t be scared,” Keller said. “Just because there’s someone who wants to scare you and is succeeding, doesn’t mean there’s nothing you can do.”

So here’s what you can do:

If you need assistance or are willing to provide assistance, contact