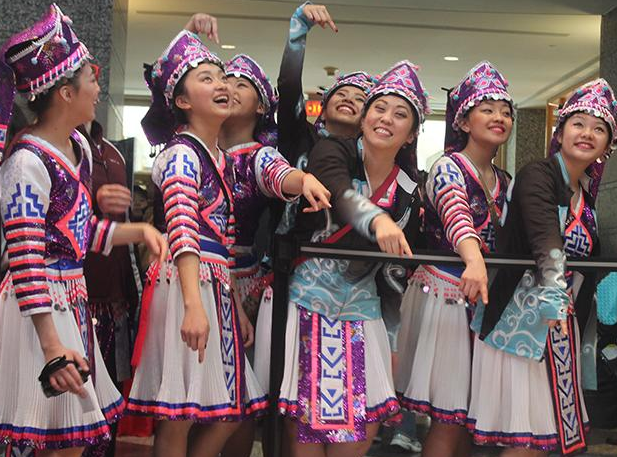 The weekend ceremony celebrating the opening of the “We Are Hmong Minnesota” exhibit at the Minnesota History Center drew thousands of people commemorating the 40th anniversary of the Hmong American resettlement in the United States.

The exhibit, which consists of more than 250 items, provides a host of written, recorded and raw materials that accentuate the triumphs and trials as well as the history, culture and achievements of Hmong Americans, who four decades ago began to make their mark in Minnesota.

“I’m really excited that Minnesota has recognized Hmong Americans and they’re allowing us to put this exhibit here,” said Chue Vue, St. Paul School Board member. “We have been in this country four about 40 years now, and we have made our imprints here. To have an exhibit at the Minnesota Historical Society means a lot to us.”

An ethnic group with ancient roots in China, as one piece in the exhibit explains, the Hmong escaped the Secret War and the Vietnam conflict in the ’60s and ‘70s and as refugees established a new life in the U.S. and other parts of the world.

Another piece answers why the Twin Cities metro area has become home to the largest Hmong American population in the country:

The most important factors were organizations such as Lutheran Social Services, Catholic Charities, the International Institution of Minnesota and Church World Services. These agencies, joined by individual churches and families, provided a welcoming presence for the Hmong in Minnesota. Word spread quickly through the refugee camps that the Hmong in the United States were thriving. Despite language barriers, health and housing issues, few job skills, and little formal education, the Hmong adapted well, and within a few years, their close-knit community attracted Hmong from other states.

With more than 66,000 Hmong in Minnesota today, the community has been making headlines in local and state politics in the last three decades. In 2013 alone, the Twin Cities sent three Hmong Americans to public offices: Dai Thao was elected to St. Paul City Council; Blong Young to the Minneapolis City Council; and Chue Vue to the St. Paul School Board.

While Vue celebrated his community’s achievements, he didn’t lose sight of the struggles Hmong Americans have experienced when they first arrived here.

“The first few years, five to 10 years, were very challenging to the immigrant community,” Vue said. “But we made it. For 40 years, we’re slowly, but surely, adjusting to this country.”

Vue arrived in the U.S. in 1979, at age 11, with his journey beginning in Dallas, Texas. “It was a very foreign, very scary place because we lived in a project neighborhood,” he remembered. Then Vue made his way from Texas to Oklahoma, then to Wisconsin and finally to Minnesota in 2003.

The Hmong community has seen a growth of 45 percent since 2000, according a piece in the exhibit. The community’s population has increased as a result of a high birth rate and people relocating to Minnesota from other parts of the country.

Though the Hmong adapted to life in the U.S. and other parts of the world, one piece in the exhibit explains the Hmong community doesn’t have a place to call home, unlike other immigrants in the U.S., including Somalis, Iraqis and Liberians:

It’s important that you tell this part of our story: the Hmong came to America   without a homeland. Even in the very beginning, we knew that we were looking for a home. Other people, in moments of sadness and despair, can look to a place in the world where they might belong. We are not like that. I knew that our chance was here. Our chance to share in a new place and a new home. This is so important to our story. You must think about it, and tell it all the way it is.

Exhibit Curator Brian Horrigan of the Minnesota Historical Society estimated that about 4,000 gathered at the exhibit grand opening. “It’s certainly going to be remembered as the biggest exhibit opening we’ve ever had,” he said. “Perhaps the biggest crowd we’ve ever had in the building.”

Horrigan added: “Hmong taught Minnesota something. They taught something about the world, about responsibility, about resilience, about tolerance — and I think that’s important to recognize.”

The “We Are Hmong Minnesota” exhibit will be displayed at the History Center through Nov. 29.