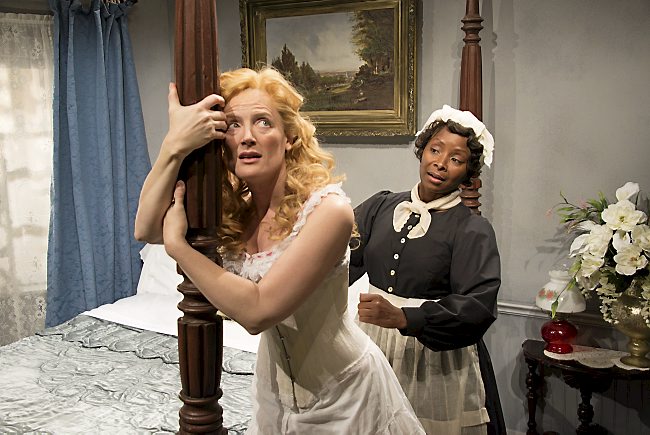 You’re a black American woman in 1933. You want to be an actress. You have integrity. Do you refuse roles that portray and perpetuate negative stereotypes? Or do you take those parts and turn them into something more? That is a central question in Lynn Nottage’s By the Way, Meet Vera Stark playing at the Penumbra Feb. 5 through Mar. 1.

It’s a powerful play, heavy with demonstrations of personal strength and glimpses into a society that requires (but doesn’t reward) them. The heaviness is masterfully balanced with humor that helps the story meet the audience members where they are. Humor is always a good buffer.

The acting is superb. Crystal Fox plays the title role. There’s something about her persona that draws you in immediately; she delivers her fast-paced lines with comic timing while her eyes hint at when something is humorous and when it’s funny like bad fish.

In the second act, we learn that Vera did take that stereotype role (in 1933 as Tilly in The Belle of New Orleans) that perpetuates a stereotype and has made it her own. She enters the second act as an aging actress guest star on a Merv Griffin-esque television show set in 1973. She wants to talk about equal rights, Selma and even touches on gay rights. Merv (known here as Brad Donovan) wants to talk about The Belle. “Tilly is my shame and my glory,” she says. The part opened doors for her – but always to the same room. You can see the tears of frustration in her eyes at the end of the scene. That personal frustration tugs at the heart strings of universal understanding or at least universal to anyone who has felt it.

In a life imitating art, imitating life twist most of the performers on stage play stereotypes (with clever doubling up on roles some play two!) and they make those roles their own too. I brought my 10 year old daughter; she loved Greta Oglesby as Lottie, especially as she talked to the radio soap opera. Her voice, while we only got snippets for effect, is deep and wonderful. Jamila Anderson gets the award for the most dramatic character change – from pretending to be Brazilian to fervent lesbian feminist. Both roles offer great comic punctuation. Fun for a mother-daughter duo to see so many strong scharacters on stage; they were well supported by men!

Norah Long plays Gloria Mitchell, Vera’s boss, costar and perhaps cousin. She is the historical white contrast to Vera. She deals with her own devils (aging, living down title of America’s Sweetie Pie, uncertain heritage) as an actress in 1933. Blinded by her own troubles, she refuses to see (or help eliminate) Vera’s barriers; it’s a character that’s easy to dislike but Long adds enough humanity into the character to keep the audience hoping she’ll do the right thing.

The play on the surface is a study on the life of Vera Stark. It include flashbacks and reactions of college seminars and talk shows. The mystery of the actress drives the momentum of the play – whatever become of her? Did she do the right thing? Are black actresses still making the same tough decisions?

Maybe it’s my Lake Woebegone Minnesota roots showing, but the best part of the story is that it’s entirely fictional. There was no Vera Stark. But she sure feels real.

A couple of added notes on the production – given there is no Vera Stark – I’d like to offer to happily take her wardrobe of Penumbra’s hands. The costumes and sets were impeccable and enviable! Also the show is mostly kid-friendly. Some bad language and a couple quick sexual references that thankfully didn’t spur questions. The questions in the car on the way home were focused on tough choices and inequality. Questions worth raising!