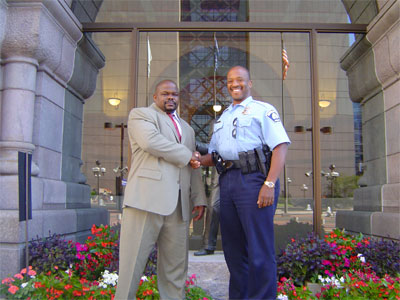 The CRA is an independent investigative unit of the Minneapolis Department of Civil Rights (MDCR) authorized to investigate citizen allegations of police misconduct. “The CRA is necessarily rooted in years, even decades, of police misconduct, which has brought about community distrust,” said CRA manager Samuel Lee Reid. “There was a groundswell from years of things happening in the community; those two incidents brought the history and the pattern of [events] to a head…the public [just] said enough is enough.”

The CRA was once shut down after its funding was cut in 2002. It then re-opened as part of the MDCR with several ordinance changes. The CRA is now under review and is subject to undergo significant changes to reflect increased collaboration between the MDCR and the MPD. The call for this review came with former Police Chief William McManus’s public allegations of substandard work by the CRA staff. MPD officials have also suggested an air of bias lurking amongst the CRA board, rendering them unable “to render a fair decision.”

The response came from the MDCR former director Jayne Khalifa, who hired Michael Browne as a consultant to assess the quality of CRA investigations and the effectiveness of the disciplinary process.

Browne used an investigation study by Samuel Walker as a standard to look at the CRA files. “He is the guru of civilian oversight,” said Browne. A Study of the Policy and Process of the Minneapolis Civilian Police Review Authority was published in February 2006. Along with addressing the MPD’s allegations, the study’s purpose was also to “assess the current implementations of the CRA’s governing ordinance and make further recommendations for improving the CRA administrative process.”

Council Member Betsy Hodges, Ward 13, suggested that the recommendation made in Browne’s report “brought focus to the argument.”

“One of [McManus’s] ways of dealing with the problem of police misconduct was if [he] pinned [the problem] on the CRA’s work performance, he could justify no discipline. Browne’s report blew that out of the water,” said the CRA’s Reid.

In the executive summary of the report, Browne concluded that, “The combination of a lack of specifically prohibited acts of police misconduct, and inconsistencies in the implementation of discipline, has allowed the Chief to supersede the CRA Board’s finding and make his own decision to “Sustain” or “Not Sustain” the alleged misconduct. This enhances the risk that the CRA, as an institution, becomes subject to ‘administrative drift.’”

“Twenty-five cases have not received discipline and are currently [on] the police chief’s desk,” said Reid at a recent MDCR community education and engagement meeting. “Of the 80 cases since November 2003, only 12 have received discipline. The MPD does not [implement] discipline, it only sustains allegations of police conduct. The CRA cannot force discipline; [it can] only make suggestions or recommendations. The current discussion is about putting an ordinance in place to make the police chief put discipline on an officer,” he said.

The chief’s failure to administer discipline undermines the work of the CRA, according to the report, and has prompted Hodges to introduce a couple of motions to change how the ordinance concerning discipline is written. “One point of contention is whether or not the chief should be able to say that a complaint should or should not be sustained. Should he be able to overturn that decision and rename or redirect it?” explained Hodges. She summarized her recent motion, which is still under review, as a “plea to punish directly.”

The motion states, “The chief’s disciplinary decision shall be based on the adjudicated facts as determined by the CRA Board, and shall not include a de novo review of the facts by the MPD’s Internal Affairs Unit or any other police officer, unit, or division. Under this ordinance, a sustained CRA complaint shall be deemed just cause for disciplinary action by the chief of police or the mayor of Minneapolis.”

“The ordinance is clear that citizens have a choice between Internal Affairs and the CRA,” Hodges said. “I want to preserve the authority and function of the CRA, which is an independent board that can [investigate] findings about police misconduct; to maintain its integrity and authority. If we allow the chief to say whether or not a complaint should be sustained, it completely guts the authority of the CRA. Taking 30 days [to discipline] should be the exception, and not the rule — and certainly not three to five years.” Hodges also said that in recent discussions, the police department has indicated that it is no longer willing to redirect its cases to Internal Affairs.

The study sites several reasons why the redirection of investigations occurred and the chief failed to apply discipline, including: the MPD discipline panel did not believe a complainant, especially if witnesses were relatives; the officer erred in good faith; an officer did not have a chance to explain himself to a CRA panel; or the time of discipline has passed.

Studies show that there is a small amount of repeat complainants, but “from January to June 2006, out of the 41 officers that have come under investigation, 38 were repeats,” said Reid.

“There is an element within the police department that violates citizens on a regular basis,” said Browne, now interim MDCR director. “If the police chief does not act on [a case], it never becomes public information, and the unawareness continues,” he said.

According to Browne’s study, 24 percent of CRA investigations met the standard, and 70 percent exceeded it. “So there is a 94 percent probability that the work was good, so why is the work substandard?” he asked.

“I never heard Chief McManus make a substandard claim,” said Deputy Chief Don Harris. “There was a Professional Standards Bureau to oversee the disciplinary system in place from within the MPD, so most of what he knew [concerning the work of the CRA], he knew because of me. I believe there was a substandard-ized investigations process.”

Harris also asserted that the time this claim referred to was in 2002-2003 under different management. “The cases sent to the department for disciplinary action — witnesses were unavailable, interviews took place where key questions were not asked,” he said.

The CRA ordinance essentially states that the CRA staff investigates, the CRA board makes decisions and recommendations, and the police chief issues discipline to the accused officer. Browne found that the chief sends the board’s decisions to Internal Affairs, “who runs it through their machinery — policy procedures, discipline matrices, panels, re-interpreted facts, distorted files — all of a sudden [resulting in] 84 percent no discipline,” he said.

“The chief is not the fact-finder,” says the section of the study on “The Chief and the CRA Ordinance.” “We have a machinery that’s broke, because anytime we come back with 84 percent no discipline, there’s a problem,” said Browne.

“I don’t have a problem with civilian oversight,” said Harris, who also said the process is a catch-22 situation. “We are forced to make a disciplinary decision based on what we have. We could not send [a case] back and were forced many times to render a non-guilty verdict. We had to decide between issuing discipline versus discipline with no facts.”

There is a trust issue on both sides. “Good models for oversight start in-house,” said Harris. “We have to be trusted to deal with police misconduct when we encounter it.”

One of Browne’s recommendations was that there would be an actual working group, now called the CRA Taskforce. “These are people at the table talking to one another to figure out how the system can work better,” said Council Member Cam Gordon, Ward 2. “There have already been improvements, including the appointment of Chief Sharon Lubinski as the CRA liaison.”

“Our job is to examine the recommendations put forth by Browne and move forward,” said Hodges. The taskforce, which formed in spring 2006, is made up of six city council members, the Human Resources Department, the CRA staff manager and board chair, MDCR, MPD, the Police Federation (with legal representation), the mayor’s aide, and the City Attorney’s Office. “We will send a package of fine-tuned recommendations from the working group to the City Council,” said Hodges. Reid said the process should be completed within one month.

The working group has a sub-committee to look at how the CRA board makes policy recommendations to the police department. This Police Accountability Committee consists of all entities in the city responsible for examining police accountability issues. “This process allows all people with doubts [about the CRA] to come together to create a process that everyone could agree with,” said Hodges.

“[The taskforce] has been fair and committed to give citizens what they need; I’m grateful for their time and effort,” said Reid.

In one of the MDCR’s community education and engagement meetings, Hodges asserted, “We have to continue to address anything that undercuts the CRA’s authority. If there is to be a strong police department, there needs to be an even stronger CRA. We will take some of our authority over the police department and invest it in civilians,” she continued.

Harris says he understands the same responsibility: “Police misconduct and accountability is an ongoing discussion. There is no perfect system. The taskforce is our opportunity for dialogue and cooperation.

“We are responsible for the people that work for us, and we have a responsibility to the people of Minneapolis,” he said.

A public hearing will be held on August 30, 7 pm, at the Brian Coyle Center, 420 15th Ave S. in Minneapolis. This hearing will give community members an opportunity to voice their concerns about CRA ordinance changes. The comments will be included in the CRA Taskforce’s recommendations to the Minneapolis City Council. For more information, contact Natalie Collins at 612-673-3301 or Natalie.collins@ci.minneapo lis.mn.us.

Next week: How much of this debate on CRA and MPD standards and procedures is really about power?