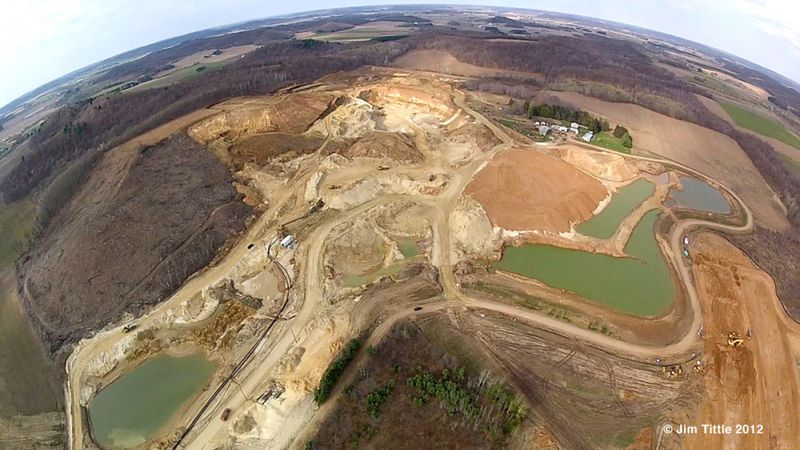 During the last session, the industrial sand industry argued that Minnesota shouldn’t be left behind from the gold rush going on in Wisconsin, and we should so not add regulations.

Fears that a Wisconsin-style frac sand mining boom could reach the east metro communities of the Twin Cities drew a crowd of more than 300 people to a forum Tuesday night in Mahtomedi.

It isn’t likely that Washington County and surrounding areas would become the next site for industrial sand mining to supply hydraulic fracturing rigs with silica sand. But there was consensus that Wisconsin’s experience, where many mines have clashed with local communities and in some cases have violated environmental laws, should not be repeated.

Even the Mayor of FracSandville is singing a different tune to lull the locals:

“Minnesota is not Wisconsin,” said Dennis Egan, who represents the Minnesota Industrial Sand Council. Egan said Minnesota currently has nine silica sand mining operations, and only three new permits have been issued in the past year or so.

According to Wisconsin Watch, Wisconsin has more than 100 permitted frac sand mines or processing facilities.

So the industrial sand industry in Minnesota is okay with that pace? That would make a cat laugh.

A group of Southeast Minnesota citizens with more experience with the sand mining industry are doing more than listening. From a Land Stewardship Project press release Wednesday:

WINONA, Minn. – Local citizens appealing the Winona County Board’s decisions on the Nisbit frac sand mine filed their legal brief last week with the Minnesota Court of Appeals. Twelve citizens joined together this spring to contest the County Board’s 3-2 decision in April to not require an Environmental Impact Statement (EIS) on the mine. They also contest the County Board’s 3-2 decision in June to grant the Nisbit mine a conditional use permit. The appellants’ brief concludes that the three Board members voting in the majority on both decisions acted “in disregard of clearly identified legal requirements under well established Minnesota law repeatedly presented in considerable detail.”

The brief calls on the Court of Appeals to require the Winona County Board to order an EIS on the mine and to vacate the mine’s permit until the EIS is completed, because the Board’s earlier decisions “resulted from an error of law and lacked substantial evidence on important issues.” An EIS is a much more comprehensive form of environmental review than the short Environmental Assessment Worksheet (EAW) which has been completed on the mine.

“The County Board majority really got ahead of itself in permitting this mine without ordering an EIS,” said Margaret Walsh, a Winona resident and one of the appellants. “For more than two years, people have been raising concerns about the Nisbit mine, including air and water quality, traffic safety and road impacts. We’re concerned about the mine’s effects on community health and the quality of life for residents living near the frac sand mine and along its haul route to the processing facility in Winona. We’re hopeful that the Court of Appeals will reverse the Board’s decisions.”

The Nisbit mine has recently begun operations and, according to local media reports, will supply sand to the dairy industry. However, the permit granted by the County Board in June allows the mine to sell frac sand, used by the oil and gas industry for hydraulic fracturing, at a rate of up to 140 semi-truck loads per day. According to the mine’s EAW, these trucks will pass along a 20-mile route that goes through Utica, and then through Lewiston and Stockton on U.S. Hwy. 14 before dumping the sand at the Hemker/Bronk processing facility across from Saint Mary’s University on Old Goodview Road in Winona.

The Nisbit mine is one of at least seven frac sand mines proposed in an approximately five-mile by two-mile area in Winona County and neighboring Fillmore County. Citizens and state agencies, including the Minnesota Department of Health and the Minnesota Pollution Control Agency, have repeatedly called for the cumulative impacts of this mining activity and the associated frac sand processing and transportation to be examined before any permitting decisions are made.

The appellants have retained land use attorney Jim Peters of Glenwood, Minn., to represent them. A decision from the Court of Appeals is expected by April 2014. More than 30 local residents have provided the financial support needed for these legal actions.

Houston County: Frac sand ban ‘not off the table’

Chairman Justin Zmyewski stated that he met with Will Seuffert, executive director of the Minnesota Environmental Quality Board (EQB) last week to discuss frac sand mining issues, and found support for local control. . . .

“Instead of having a blanket set of guidelines for the whole state, there may be an independent set dealing with each area, each region. The director came down and met with a few people and made kind of a tour of Southeast Minnesota.”

“One of the points I was trying to get across is that our region is very different from the rest of the state. We have different geology…” “Are there certain areas that should be off limits? We’ve had people over in the Wabasha-Lake Pepin area that have said, ‘This needs to be off limits,’ so we asked about the possibility of…those kinds of restrictions. Is it still on the table that certain areas need to be banned due to geology or due to economic impact?” . . .

Read the whole thing at the Spring Grove Herald.

Photo: A frac sand mine in Wisconsin (Photo by Jim Tittle)