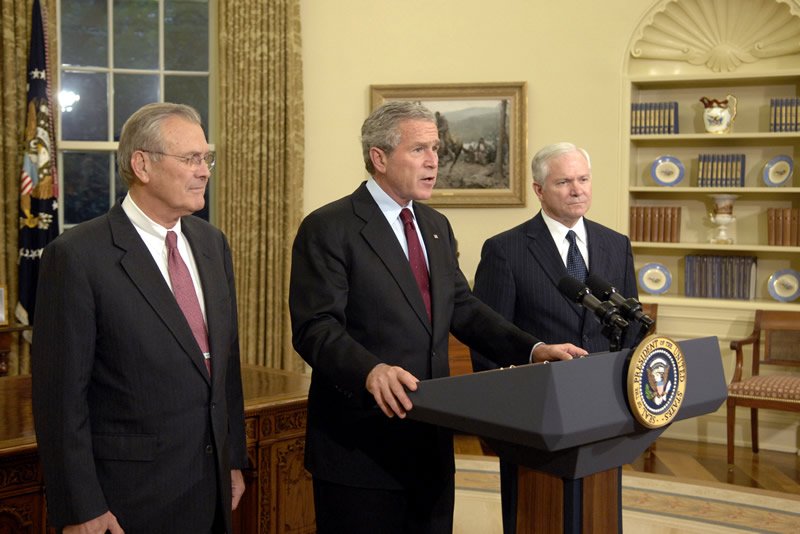 UPDATE: Heard from the Speaker of the Minnesota House, sadly shortly to be minority leader (replaced by this guy), and looks like some state-specific comments of mine might not hold up. Details here.

When Pres. Obama announced his support for net neutrality right after the election, I thought I understood how Republicans felt when Bush Jr. forced out Defense Sec. Don Rumsfeld right after the 2006 election. Well, that was nice, but couldn’t you have done that before we got toasted in the midterm election?! Of course my first response to Obama’s announcement was to be glad he came out so strongly on the side of the angels, but my next thought was to recall an image of Rumsfeld’s resignation being announced. Why not do this before the election, and maybe save some seats?

The silver lining of an election loss is it makes us more likely to consider our assumptions. We may not even realize we’re making assumptions. The assumption in this case is the spinelessness of Democratic candidates and elected officials. We in the Democratic base have pleaded for more spine for I don’t recall how long. Back to the 80’s maybe? The 70’s? The 90’s at least. Election after election, but especially during midterms when there’s a Democratic president, we see one self-defeating move after another. The seeming political cowardice wasn’t just on the part of Obama, despite my reaction to the timing of his net neutrality announcement, and despite his failure to do anything on immigration until last night, which I blame for the lower than expected (lower than expected by me anyway) turnout among Latinos. I’m inclined give him a pass on the timing of his strong stances on global warming since those likely had to wait for summits in China and Australia, though that doesn’t explain other Democrats not running on it.

Nor do Obama’s decisions excuse Democratic candidates who avoided him during their own reelections, and the many who avoided other Democrats at all, as if they weren’t running on a ticket. There were exceptions: Minnesota’s statewide candidates very much ran as a ticket, campaigning on the Democratic successes most Democrats rarely mentioned, for example; but in general, Democrats ran every-candidate-for-themselves with campaigns focused on appeasing, if not conservatives, then those mysterious centrists.

But was it really cowardice? I’m asking the base to question our assumption of gutlessness. Maybe this was strategy; lousy, awful strategy. If that’s the case, if spine isn’t the problem, then no wonder our appeals for political courage seem to achieve so little. We’re making the wrong demand.

Two things made me ask if I was making an assumption that might not be accurate. One was noticing back in the 2008 campaign that Obama had a spine of steel. I could see he was a conciliator rather than a fighter, but forced into a fight, I saw him hit back hard. This was hard to reconcile with the president who caved in to red state Democrats who pleaded with him to delay his executive order on immigration until after the election. And of course, I can list grievances with how some things were handled by the administration. But at other times, I’ve thought I saw the steel spine.

Let’s conduct a thought experiment. Imagine our candidates had reasonable amounts of political courage, but they were getting campaign advice from the same small group of very wrong people. We see the pundit class suffer no penalty for being wrong. As long as they’re within acceptable opinion, they keep appearing on TV and on the newspaper editorial page, with accuracy seemingly no criteria in their retention. Maybe there’s a class of campaign consultants who aren’t in the public eye, but otherwise are as immune from penalties for wrongness as the pundits. Maybe entry level consultants move up not from being right, but from confirming the opinions of those above. They might be wrong, but really, how wrong can you be if everyone else thought the same thing? The answer of course is “very”, but that’s often not considered as bad as being right too far ahead of everyone else.

Further imagine that the bad advice this consultant class keeps giving out, and candidates keep following, is to avoid a president who is unpopular with likely voters which, during midterms, presidents almost always are, given the greater motivation of voters of the non-presidential party. Besides undermining their party’s president, suppose they’re advised to follow a strategy of avoiding other Democrats and running on their own. Imagine they’re advised to ignore their base and play to the center, which is assumed to lean conservative. What would this imaginary campaign look like?

It looks an awful lot like the campaign we actually had. Which suggests that this thought experiment meets the test of plausibility. And yes, it’s what I’ve come to think actually keeps happening.

A theory that’s alternative, but not contradictory, is that Democrats seeking reelection are listening to fellow Democrats who followed this bad strategy and survived, leading them to think, and to pass along as wisdom, that this is how to win reelection. I’m thinking, as a prime example, of Rep. Colin Peterson, MN-07, who ran TV ads attacking Obama and Obamacare. He survived; he was about the only one running this way who did. Think the message he’s conveying is that this is how to win? Think maybe other Democrats have for years been listening to those who won with this bad strategy, never thinking maybe they won despite how they campaigned? Never thinking they should look at what losing candidates did?

I can’t read minds. I wasn’t privy to campaign strategy discussions. Maybe it was all a lack of spine rather than the persistence of bad strategy. Yet it seems candidates acting out of fear would be afraid their base wouldn’t come out. They would be afraid of not being associated with popular positions. I’m no longer convinced spineless Democrats would campaign as they have in pretty much every non-presidential campaign ever. Coming back to the exception of Minnesota, it was an exception only with the statewide races, and really only with Mark Dayton and Al Franken since the constitutional offices tend to be below the radar. I observed state legislative campaigns in swing districts run like they were the only race. They didn’t disassociate just from Obama, but from Franken and Dayton too. What was tragic was Democratic losses were in rural state house districts, yet Franken won a bunch of rural counties he lost in 2008, counties which significantly overlap lost districts. Suburban swing district candidates, from what I observed (hardly saw them all of course), likewise avoided association with other candidates on the Democratic ticket.

It appears running away from the rest of the ticket not only hurts the candidate in question, but weakens the other Democrats. I’m not sure of the mechanism that makes this self-defeating, but the results sure say this doesn’t work. It seems a bit like the drop-off Democrat problem in that we don’t know what it takes to turnout our voters, but it’s pretty clear what we’re doing didn’t work.

So maybe it’s time to try something else? For candidates, that means dropping this strategy that may be the conventional wisdom of the consultant class and surviving blue dogs, but fails every time. For the base, that means accepting that our complaining about lack of spine isn’t working, and we need to try something else. Personally, for whatever my influence is worth, I’m pushing for changes in strategy. At least the bad election results and lack of progress with the drop-of Democrat problem mean I can always say my alternatives might not sound convincing, but what we’re doing isn’t working.

UPDATE: Speaker of the Minnesota House Paul Thissen pointed out that in 8 of the 10 lost rural state house seats, the defeated DFLer outperformed Al Franken and Mark Dayton, which certainly weakens the idea they could have done better just by associating themselves with the top of the ticket. He also pointed out that events were arranged in rural districts with the governor to make the association clear. It could be inferred from what I said that the candidates who ran on their own were getting their advice from leaders of the DFL caucus, so let me clarify that that’s not where I guessed they were getting that notion from. I observed the speaker and DFL representatives running in cooperation with the rest of the ticket. So it seems to have been an individual thing with some candidates. Still a bad idea, but I’m making no guesses as to who thought that was a good idea, beyond ruling out the DFL caucus.

The Speaker also pointed out that there were other factors creating a difficult environment, and I never intended to imply that bad strategy, even were I spot on about that, was the whole explanation. It’s just that the strategy used by many defeated Democrats was the focus of this post. I mentioned others in my post on post-election observations, and I plan to expand on some in separate posts. This post is the first of those separate post. Just to clarify, sometimes even the optimum strategy won’t work. Sometimes you’re up against a macro-environment you can’t control, at least not in one election season. You re-think the parts you can control.