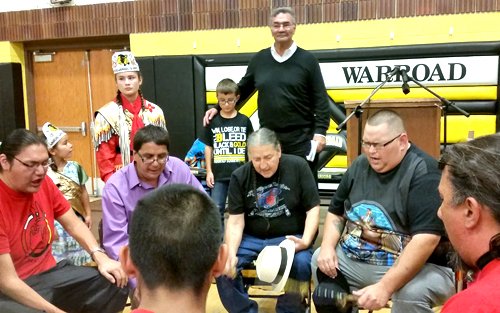 In its 30 year quest to influence teams to change their names, mascots and logos from those that are offense to Native Americans, the National Coalition Against Racism in Sports and Media is making strides. Thousands of high schools and colleges across the country have felt the pressure and given up names which encourage stereotyping of indigenous people.

NCARSM, which is based in Minneapolis, still has work to do before the thousands of offensive team names still in use are relegated to the annals of history. The organization’s current strategy is to go after the National Football League’s Washington team, a nationally prominent team whose name is a racial slur and whose tradition of mocking Native American people is seen as particularly vile.

“We believe that when the Washington team changes, everyone else will follow,” NCARSM board member Clyde Bellecourt said. He also said the Washington team has a tradition of upholding institutional racism that goes far beyond the current disagreement over its name. The team was last in the National Football League to allow – in October of 1961 – non-white players on its roster, a move that prompted their former supporters, the American Nazi Party, to protest outside RFK Stadium.

But as NCARSM focused its efforts on organizing a major rally against the Washington team (who play the Minnesota Vikings at TCF Bank Stadium on the campus of the University of Minnesota Nov. 2) one of its board members, the organization alleges, Alan Yelsey – without the knowledge or blessing of others within the organization – was mailing threatening letters to schools with disparaging team names. Yelsey and NCARSM have since parted ways.

Warroad Public Schools superintendent Craig Oftedahl was among those who received the rogue letters, which reportedly threatened to sue the district if it failed to give up its Warriors team name and logo. Oftedahl’s first impulse was to call Henry Boucha, a prominent local Ojibwe community leader and former member of the Minnesota North Stars and U.S. Olympic hockey teams.

“I was surprised as hell when Craig called me,” Boucha said. “I thought we were in the clear regarding the name change issue. We had already gone through this with the Coalition back in 1989.”

In 1989, after two years of discussion, Warroad Public Schools settled out-of-court with NCARSM, then led by Clyde Bellecourt’s now-deceased older brother Vernon Bellecourt. At the time Warroad agreed not to use an Indian mascot and to reaffirm with the local Ojibwe community its support of the Warriors name and logo.

“NCARSM dropped its objections after it was verified that the Indian community, the Indian Parent Committee and our Indian Education Department all supported the use of the Warriors,” Boucha said. “The name comes directly from our Ojibwe history. Our warriors secured Warroad and the Lake of the Woods area after a long war with the Dakota. The logo was designed by our own Indian people.”

After the NCARSM Facebook page received a flood of angry messages from Warroad residents and hockey fans around the country, the organization invited Boucha to address its board.

Warroad is well known in hockey circles for the disproportionate number of Olympians it has produced. The small city on Lake of the Woods near the Canadian Border (population 1,800) has sent seven hockey players to the Olympic Games, including Boucha, Bill Christian, Dave Christian, Gordon Christian, Roger Christian, Gisele Marvin and T.J Oshie.

“I educated the Coalition on the history of Warroad and how proud we are of the heritage we have there. Most of these people weren’t around in 1989 and had no idea we’d been through all of this before,” Boucha said. 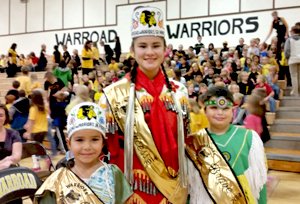 Boucha told the story of Ay-Ash-A-Wash, the chief of Warroad during the heat of the war for the Lake of the Woods region. Ay-Ash-A-Wash was in a battle at Two Rivers, 40 miles west of Warroad, when he was badly wounded and played dead. One of the Dakota warriors, according to the oral history, scalped him and left him for dead.

Ay-Ash-A-Wash managed to crawl away and made his way back to Warroad. Most thought he had been lost in battle and there was a great outpouring of joy when he returned to his people. Years later, Ay-Ash-A-Wash’s son Na-May-Poke, a wise man who valued education, donated land from his allotment on the north side of Warroad for the community’s first school. He asked that the school’s teams be called the Warriors in honor of Ojibwe warriors who fell in battles past.

NCARSM president David Glass apologized to Boucha for the errant letter and extended an invitation for Boucha to join its board, which he accepted. The former hockey great and current film and television producer said he hopes to utilize his position “to do as much good as possible.”

Boucha arranged for the NCARSM board to visit Warroad where, on Oc. 1, they participated in a pipe ceremony and celebration to rededicate the Warriors name and logo. 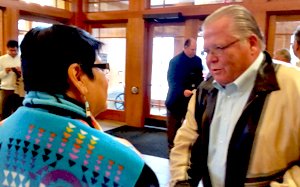 NCARSM members apologized to the community and encouraged its young people to uphold, through positive action and behavior, the time-honored Warrior tradition they represent.

Gabe Shaugabay, a member of the White Earth Nation, and a junior hockey player at Warroad High School, said he was crushed when he first heard the Warriors name might have to be changed. After the rededication ceremony, the 17 year-old defenseman was elated.

“My whole life I had watched my older cousins and then my step-brother, play for the Warriors,” Shaugabay said. “I always dreamed of being a Warrior too when my time came. Just then they threatened to take it away from us. When I heard that we got to keep our name I was just so happy. As a Native person it makes me really proud to represent our school as a member of the Warroad Warriors hockey team.”

(Above) Frank Marvin, past president of Marvin Windows and Doors, Warroad’s largest employer, greets NCARSM board member Norma Renville upon arrival in the city. The Marvin company provided its private airplane for the Coalition’s members’ flight from the Twin Cities. Frank Marvin pledged a generous donation to aid the Coalition’s efforts to convince Washington’s NFL team to change its name.