Like many apocalypses it is hard to pinpoint just where this whole zombie craze started. I expect it was sometime around the Dawn of the Dead remake or Zombieland. The birth of the zombie pub crawl was both fuelled by the madness and fanned it further. This trend lagged behind the birth of Twilight and its horrific effect on the already tired genre of romantic vampire fiction. I have to say I am a little surprised that cuddly zombies have lagged so far behind the sparkling vampires. So, here we are with Warm Bodies, a zombie love story. Boy meets girl, boy doesn’t eat girl. 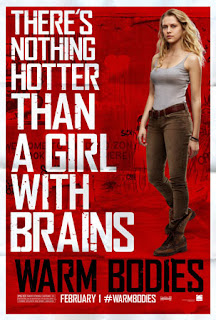 Jonathan Levine has said in interviews that he hopes horror fans will keep an open mind about this film. He’s admitted the film takes liberties with established zombie lore, but the film and the book contribute to the zombie genre. I disagree. The Dead adds something to the zombie genre, because it accepts the general tone and conceit of what a zombie film is and expands it to a new set of circumstances. Warm Bodies does neither.

To continue the Twilight compairison, Warm Bodies has as much to do with zombie cinema as those books and films have to do with Nosferatu or even Shadow of the Vampire. Warm Bodies is a romantic comedy aimed at teen-agers and people in their early twenties. The tension in this story is lifted from Romeo and Juliet, except the warring families are on either side of the grave and not society. Julie (Teresa Palmer) really wants Grigio (John Malkovich), her overbearing warrior father, to accept R (Nicholas Hoult) as pretty much human. R has a love so strong for Julie that the force of it is enough to warm his dessicated heart. This love could redeem all of the freshly undead, if Grigio will see that. I won’t spoil how that all turns out, but it isn’t Land of the Dead.

I can see emo kids and other alternative types enjoying the superficial subversion of the movie. The point that zombies like R are misunderstood outcasts from the land of the living is made early and with no nuance. This is an inversion of the George Romero conceit that his zombies were inspired by mindless consumer culture, but Warm Bodies still uses the general social commentary of Night of the Living Dead. Unfortunately, Romero’s films continue the metaphor to a logical and bleak ending, but Warm Bodies shares sentiments with other recent pop horror movies. In this kind of movie, the only end is when the abnormal, the outsider, or the weird understand they must be a part of the majority and blend. This is not really in the spirit of zombie films, this is the story structure of a sitcom. R has to do all the changing to be accepted by Julie. R has to be “saved” by humanity, which is fine for a fantasy story, but gets to be a problem when you look at the underlying theme of the film.

The performances are good enough, considering the twilight between horror and comedy they are forced to inhabit. Nicholas Hoult does his best work when he is the zombie struggling with the first warmth, but as he is given more lines to speak it sounds increasingly unnatural. Teresa Palmer acts within the range of the character, but nothing in the script really goes beyond the acting chops required to look and move like a twenty-ager might. The how’s and why’s of love aren’t really explored, other than the some vague sense of  mutual attraction and more than a little bit of Stockholm Syndrome. Well, that and R eating his romantic rival’s brains. Rob Corddry has some nice comic moments but also loses it as R falls in love with humanity. John Malkovich does that thing he does when he’s not really acting.

Even with all of these problems, it needs to be said that the special effects are by far the worst part of this film. Or maybe the funniest. The really evil zombies, Bonies, are laughingly animated and produced giggles throughout the theater I was in. This is a PG-13 movie, so there aren’t any of the glorious head shots that defined the Romero films and beyond. There’s no reason to what will stop a zombie in this movie, as a few body shots do the trick. The end of these zombies is an unconvincing burst of computer animated blood. Yep, blood.

Visually and technically, there is little to notice or comment on, other than to say that a distinct effort was clearly made to not have this look like a zombie movie. This has got to be the safest and most well-lit zombie apocalypse I’ve ever seen, and I’ve seen many. There are parody commercials out there that have a better grasp of how to light, edit, and shoot a horror movie. As a romantic comedy, it looks just fine and blends very well.

There’s no reason this movie has to be as lukewarm as it is. Horror comedy boasts some classics; An American Werewolf in London, Return of the Living Dead, or Young Frankenstein mix the two genres up well. Romance and horror have some models to look to also, Cronenberg’s The Fly, King Kong, or The Woman in Black put love at the center of their terrors. Warm Bodies misses both of these categories because nothing in it shows a real respect or understanding of the genre. Zombies are a new way for a couple of cute kids to fall in love and that’s just swell.  This didn’t have to be this kind of film. I’ve not read the novel, but at first glance it has a much more interesting story to it. More chomping, more fighting for survival, and more legitimate romance. This makes me think fans of the book will enjoy Warm Bodies as much as I did.

I suppose the good news is that once the multiplex embraces films like this, you can bet that a cycle has run its course. Zombies will fade from public obssession, The Walking Dead will end in a season or two, and all the unquiet souls will return to their holes and tombs. They won’t stay down there for long, of course, because if we can learn anything from Romero’s dead it is that they are always hungry, always waiting out of sight, and endlessly destroying the world that they made and that made them. There is still room in hell, though, and there is something down there which will eagerly welcome both the soulless dead and the lovestruck living. Something that does not sparkle.