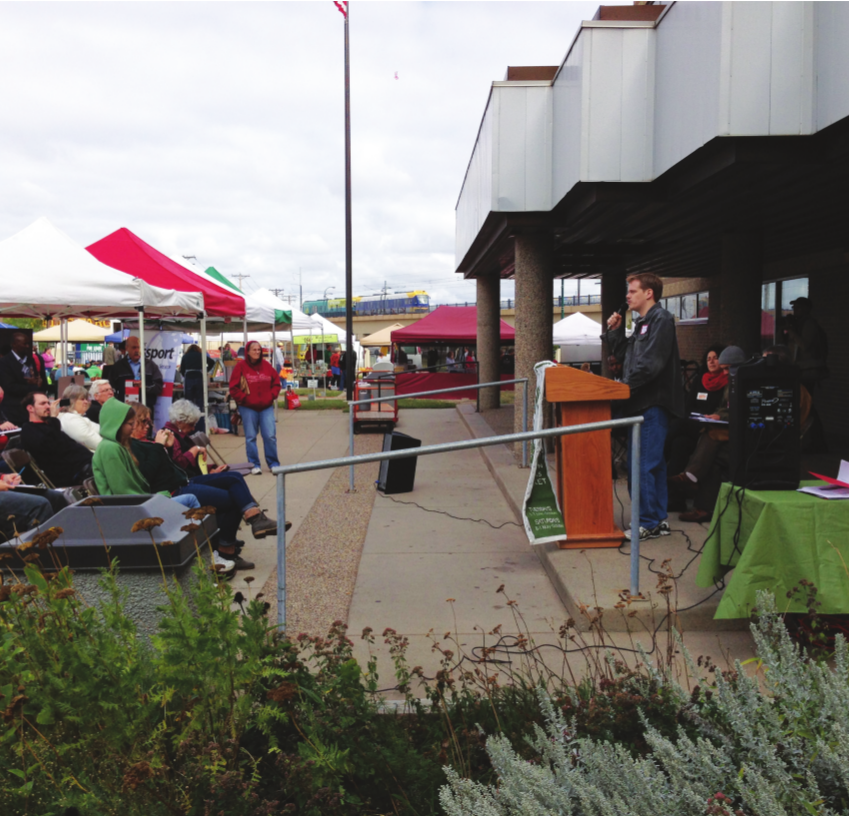 Ward 9 voters gathered at the Midtown Farmers Market on the morning of September 21 to hear the first Ward 9 city council candidate forum since the DFL ward convention. Here are each of the 5 candidates spoke to their strong points followed by the one or two word term they were asked by the moderator to distinguish themselves by.

Ty Moore “Social justice” has spent his whole adult life winning victories in community struggles as an organizer such as saving homeowners from predatory bank foreclosures and saving North High School. He offered a consistent theme of people over profits vowing to stand up to the chamber of commerce, big developers and structurally embedded racism. While the candidates expressed unanimous opposition to the Vikings Stadium tax vote Ty answered that it is just the tip of the iceberg as far as widespread corporate welfare offenses within the city.

Alondra Cano “Powerful feminism” has a community organizer background like Ty Moore. For the past 12 years Alondra organized for immigrant rights, education reform, and environmental justice from an equity analysis and being a voice for cultural inclusion. In the question about the HERC trash incinerator there was across the board candidate consensus of creative ways to maximize recycling rates and move toward zero waste. Alondra spoke a list of out-of-the-box neighborhood sustainability solutions like permitting goats for lawn care, using compost to heat water, dry toilets and do-it-yourself solar power.

Charles Curtis “public servant” is a licensed attorney who is educated and intelligent in the concepts of law how the law could be used to the people’s advantage. He prioritizes restoring essential services rather than large expensive pie in the sky projects. Charles stated that he differed from other candidates in his position that the city using eminent domain was not a good solution response to home foreclosures because one of its legal prongs is just compensation which amounts to a bank bailout from the city. Charles also stated fulfilling the midtown farmer’s market vision is going to take working with private business instead of attacking developers.

Pat Fleetham “Hardworking” has been active in community organizations and has been the one working behind the scenes getting things done. He is not a professional politician but being a dedicated community service volunteer with a background in business management gives him unique qualificaitons. Pat is a self-proclaimed law and order guy who is astute on recent occurrences of crime and safety. He emphasized reducing property taxes and term limits for council members. Pat echoed Charles Curtis in that using eminent domain is not a good idea but that it was great we stopped dual tracking.

Abdi Abdulle “safety” joined the city council race to stand up for families first and a safe community and also in response to the city not enforcing ordinances to protect houses and community centers/ programs from closing or neglect. He is a business owner with a degree in family and social science and works for equal access to education among public schools. He said politicians often promise they will work for the community but then align with the banks when they go downtown but that he will keep heart with integrity. Differing from Ty Moore, Abdi stated it was not necessary to shut the HERC down given that technology progresses.

Among all candidates there was a broad consensus around revamping the civilian review board for police, for police officers also being community members, strengthening neighborhood organizations, supporting artists, and for holding Xcel Energy accountable to the sustainability goals of the Minneapolis Energy Options campaign.