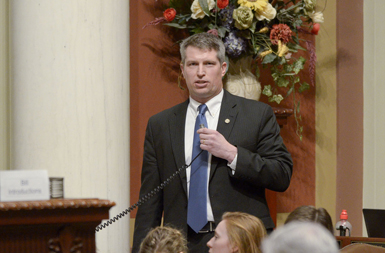 Rep. Kurt Bills said, foremost, he’s a teacher; but it’s important for everyone to be involved in the political process. (Photo by Andrew VonBank)

The freshman representative still starts most weekday mornings talking financial matters in a first-hour advanced placement class at Rosemount High School before spending the rest of his day in or near the State Capitol. However, if things go well this fall, Bills will no longer be teaching in the south suburb or driving to St. Paul.

Bills has his sights set on another dome — one in Washington, D.C. He is leaving the Minnesota House in hopes of joining the U.S. Senate.

“It’s a great lesson to everybody. No matter what party you are or what is your political ideology, get involved,” Bills said.

The change would be a tremendous jump for someone that had not served on a governmental body until elected to the city council in 2008.

It was a student asking him what today’s youth should do about the economy that sparked his interest in running for office. “That one kid’s question got me going, and now I’m going to keep going until I’m done, and then I will be an economics teacher again,” he said. “Whether it’s two months, nine months, six years or 12 years, I cannot wait until I’m back fully in the classroom again. I cannot wait to bring this knowledge back to help kids.”

The nation’s economic future is a primary motivation for Bills’ desire to move up the political ladder. He believes today’s young people deserve answers to questions that have arisen from our nation’s continually increasing debt.

“You need to reform bureaucracy and spending, you need to talk about entitlement reform,” he said. “You can’t keep putting things off.”

A self-described citizen-legislator, Bills is in a contest for the Republican Party nomination with Army National Guard Capt. Pete Hegseth and former Rep. Dan Severson (R-Sauk Rapids). Bills said he’ll abide by the mid-May party endorsement and not look back. Nor will he use his current House seat as a backup should he not be the chosen Senate candidate.

Whomever gets the nomination is expected to square off against Sen. Amy Klobuchar in the general election. Many so-called “experts” have said the Democrat is nearly unbeatable.

Bills doesn’t buy that. He’s running with the message of “Facing the Giants.”

“She’s not the giant. Our deficits, entitlement reform, monetary policy, the way we’ve handled our money, that’s the giant,” Bills said. “From what I’ve seen, she’s a very caring person … but the main issue I have is that she has not been a voice willing to talk about these issues that I see facing the kids in my classroom.”

One of the most important things Bills said he learned in the House is that things are not as partisan as it may seem to the outside world.

“There are people willing to work on things; there are people willing to compromise and get things done. I’ve learned how to talk to people both within my own party and the other party,” he said. “I’ve learned there’s the textbook how a bill becomes a law and then there’s how a bill becomes a law. These are all things I can take back to my classroom and teach kids how the process works.”

Among his accomplishments in St. Paul, Bills lists a bill passed March 28 by the House that would ban public school employees from using district resources to promote any political candidate or cause. “It’s not hindering anyone’s free speech. You can still privately on your time contact your legislator; you can still work for any cause you want,” he said.

He’s also proud of this year’s bill to create a veteran’s hiring tax credit for employers, and the creation of an early graduation achievement scholarship program that made it into last year’s omnibus education law.

Bills advice to his successor is simple: be willing to listen and learn.