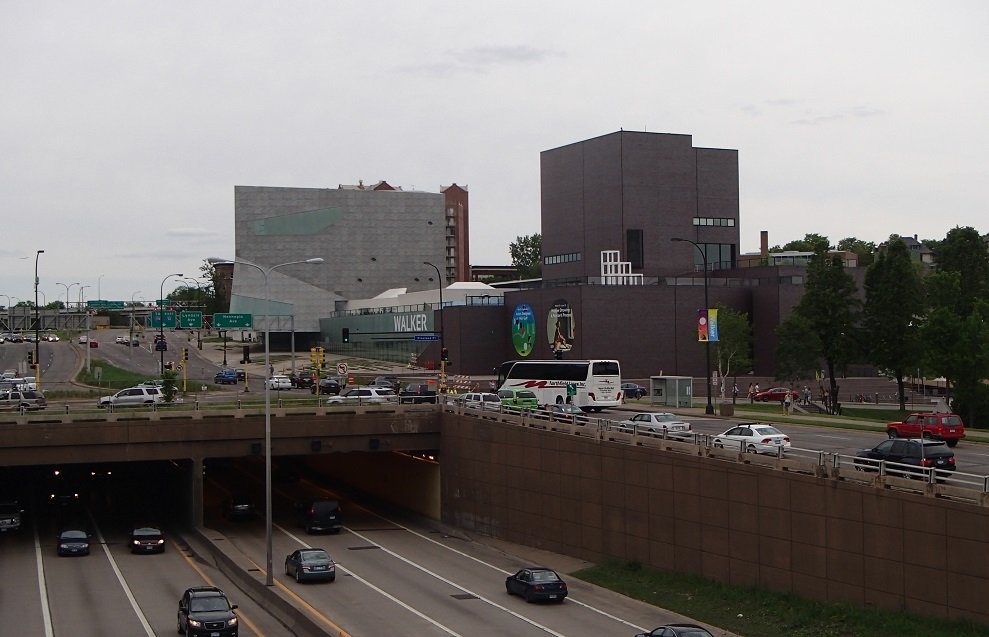 The Hennepin/Lyndale Bottleneck: Not great by any measure. The City of Minneapolis is working on a plan to, basically, repave it. Many well-written thoughts about that project and whether or not it’s a good idea and what we’d do if we had exponentially more funding for it can be found here. But as with many large public works projects of questionable value, there are some helpful little things we can do on the side that cost considerably less than millions of dollars but still go a long way towards improving the experience of being alive in the area when not driving a car.

One of those things would be to considerably alter the streetscape along the eastern side of the Walker Art Center. The Walker is the most prominent of the several institutional uses along the bottleneck, and it makes up about a fourth of its total street frontage. 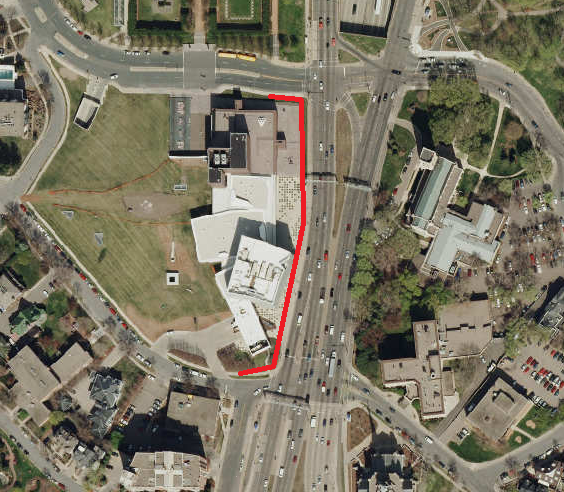 The phrase “considerably alter” maybe implies that it would be expensive, but it’d certainly be some fraction of the cost of even the most minimal bottleneck repaving, currently budgeted at about $9.1 million dollars, and a much smaller fraction of the Walker’s $152 million dollar endowment.

But there’s a lot to do here.

Here are some pictures taken on Sunday, and keep in mind that the people you see are potentially residual folks wandering around after Open Streets on Lyndale. 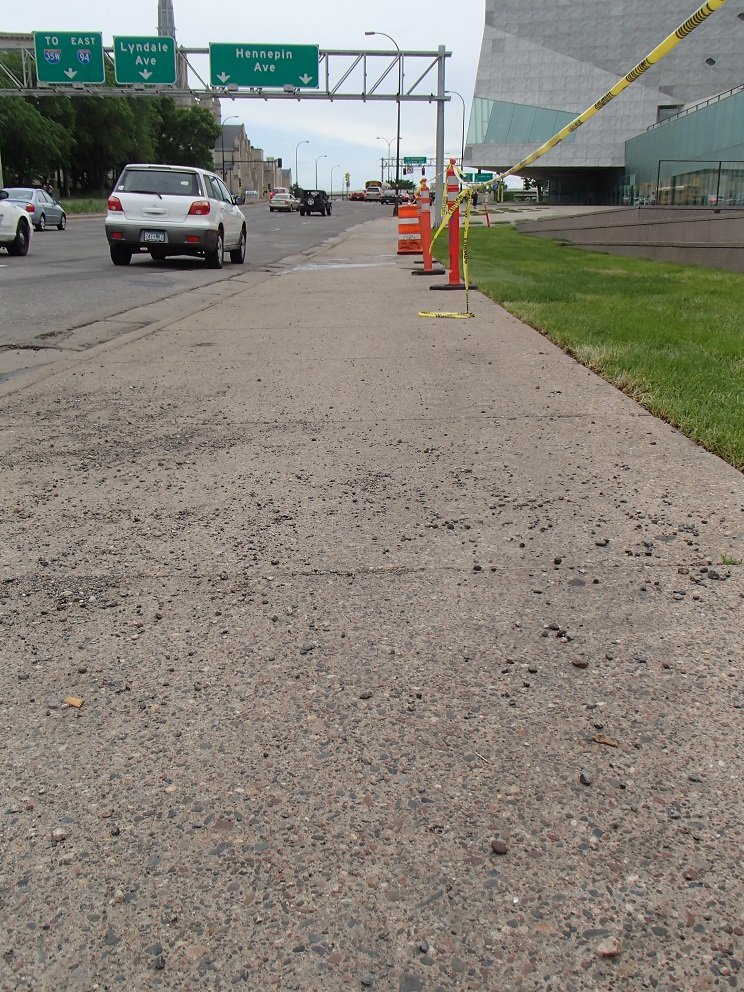 Does anyone have a Shop-Vac?

Here’s a modest strip of cement up against four lanes of car traffic, one of which is barreling towards I-94. (Sidebar: Walking around the Hennepin/Lyndale bottleneck always makes me extra aware that something like 75% to 100% of motorists are looking at or talking to their phones at any given time while driving, but that’s a subject for another time.) Obviously, the picture is a little bad because of the gravel and caution tape and gray skies, but the experience isn’t much improved when it’s swept and there’s no caution tape and it’s sunny. 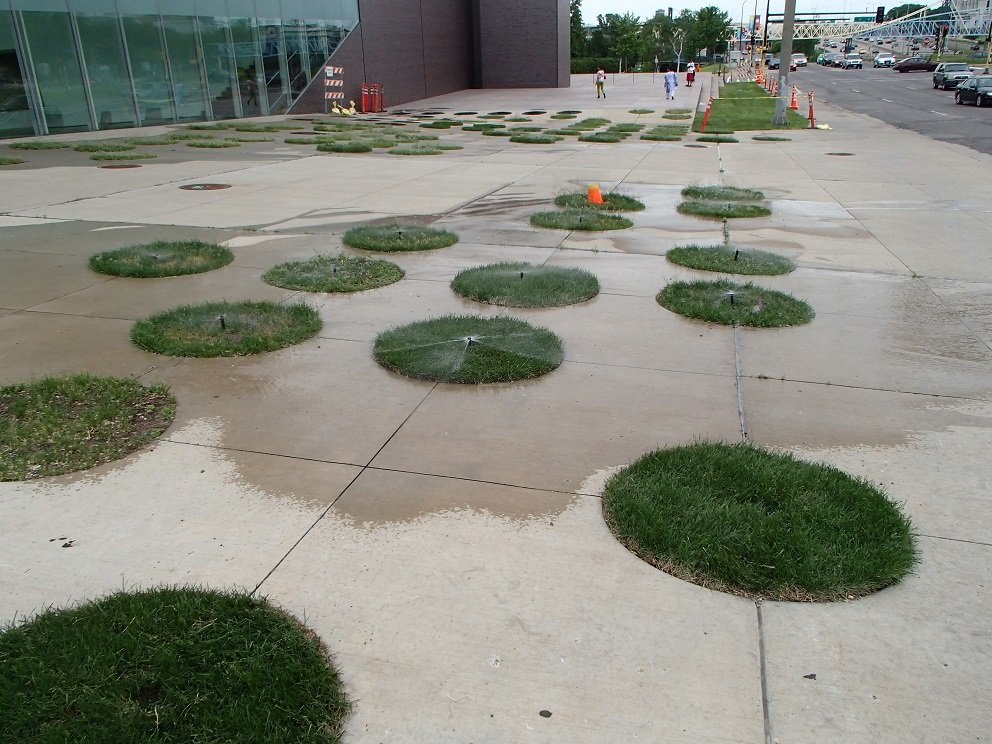 Here’s the area where the sidewalk isn’t too small–it’s huge but somehow considerably more desolate. The green patches of grass don’t do anything for it. It’s unclear what the idea is behind those. Recently, while checking out a Nice Ride bike from the rack at the Walker, I noticed that literally all of the green patches I could see had at least one cigarette butt in them. So that might be what they’re for. 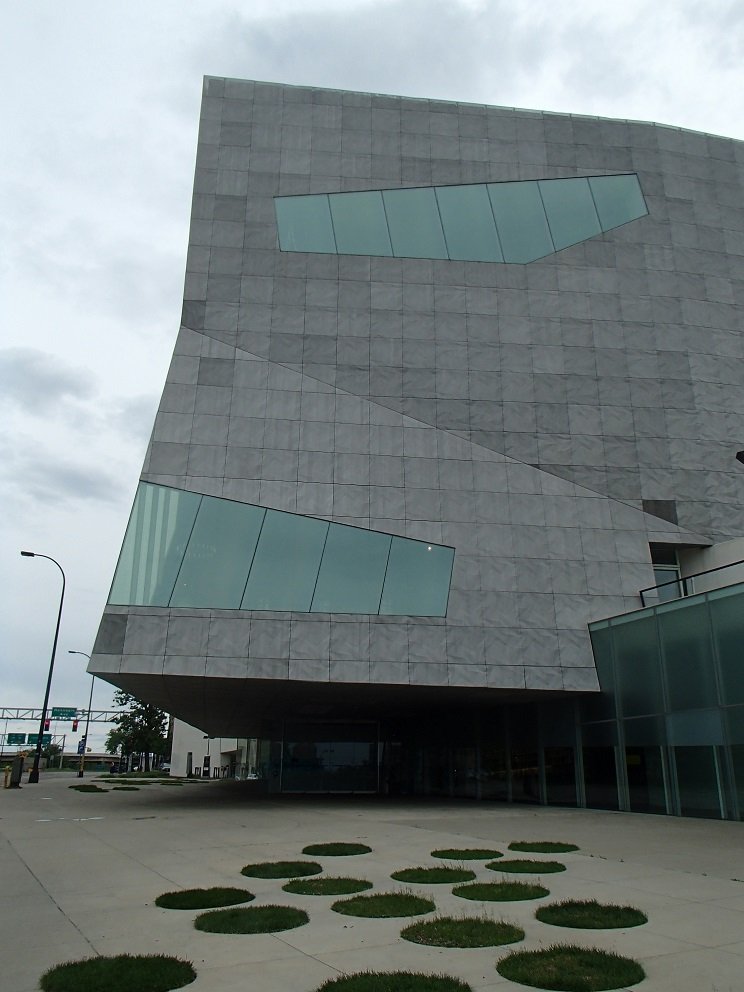 Here’s the entrance on Hennepin/Lyndale, under the giant robot head. Without getting too much into the debatable aspects of whether or not it’s a good idea to build prominent buildings that look like this…it’s the only permeable part of the Walker along this entire block, except for this parking garage entrance: 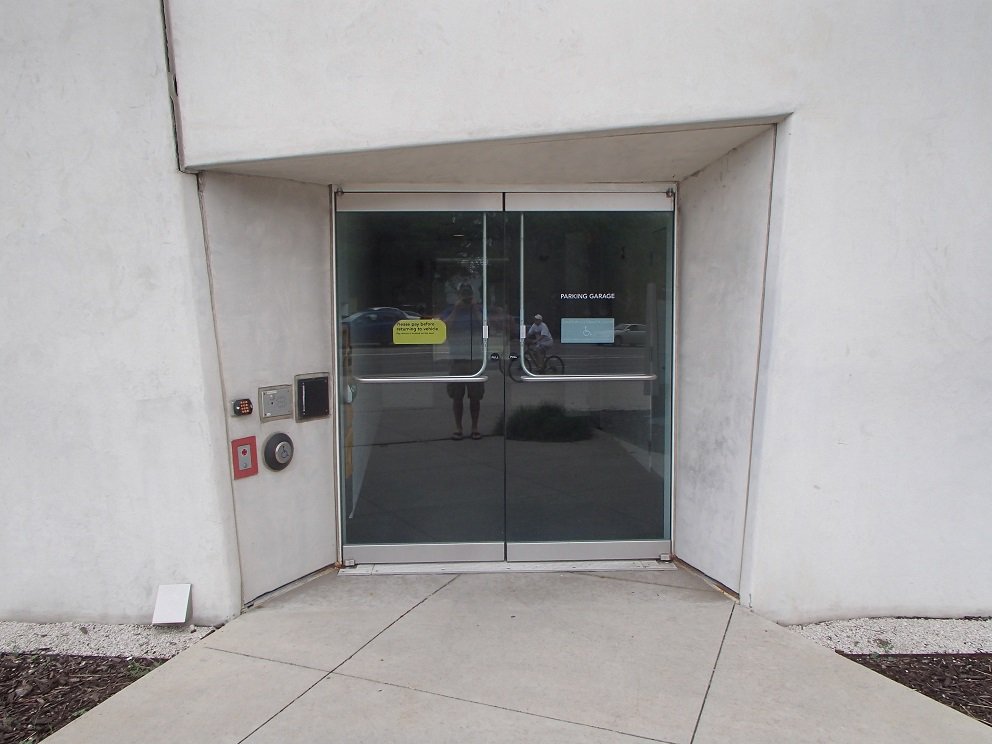 So the street frontage isn’t great–it’s basically a blank wall for over a block, with windows for some stretch of it. 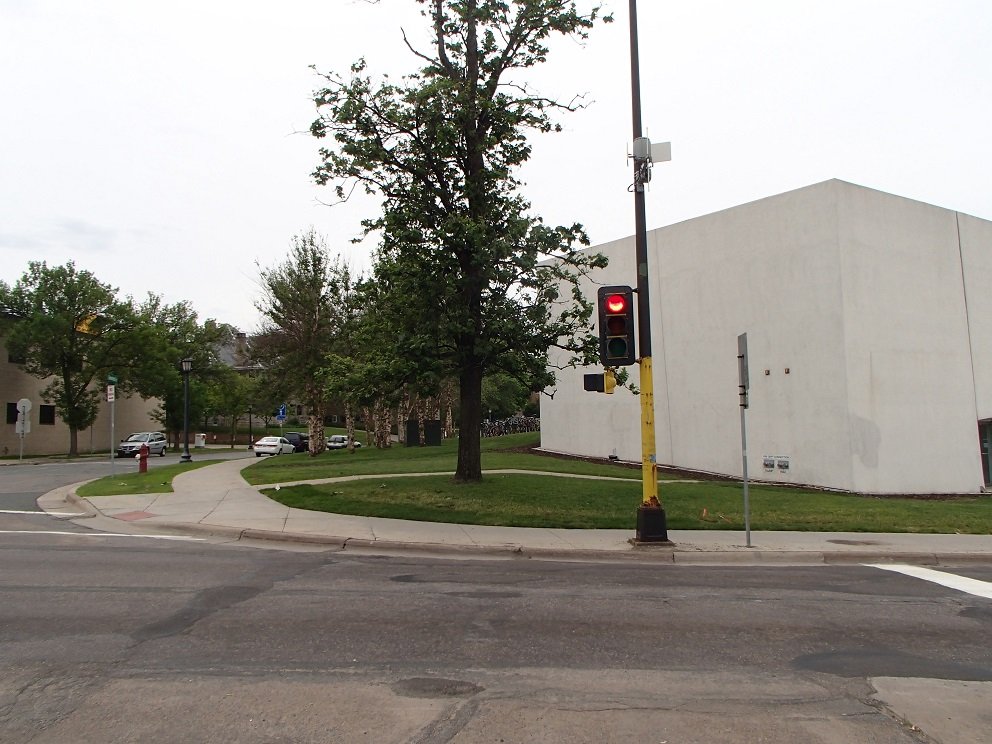 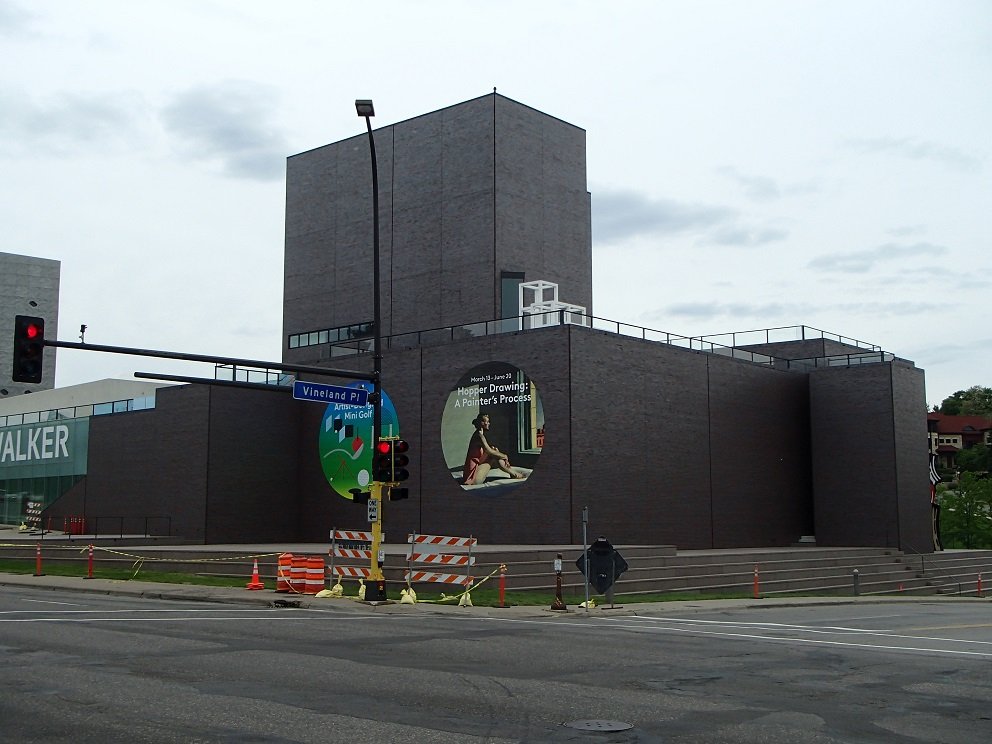 Above are the two corners of the building that face Hennepin/Lyndale, and you can see that they are literally blank walls with some interchangeable adornment on one. The current informative adornment noting some exhibits is much better than the previous, dishonest adornment. There’s some sort of quasi-plaza-like situation going on at the corner of Vineland & Bottleneck, but it’s empty and not particularly inviting. There were previously some sculptures of some sort there, but they are gone now.

It seems unlikely that this post will convince the Walker to blast holes in the side of their building, but there are some other things that could be done to substantially improve the conditions along the bottleneck without even touching the street.

It’s really important to point out, very controversially, that buildings like this alienate people for no particular reason other than to be loudly saying that they look the way that they do. Be as contemporary and avant-garde as you want with a sculpture or a painting, but architecture tends to impact people without their consent, and this building actively makes its environment worse. We can do a lot better.

Disclaimer: The author is an uncultured rube who simply doesn’t appreciate the complexities of modern architecture.

At top: Walker Art Museum, from the Irene Hixon Whitney Bridge over the Hennepin/Lyndale bottleneck