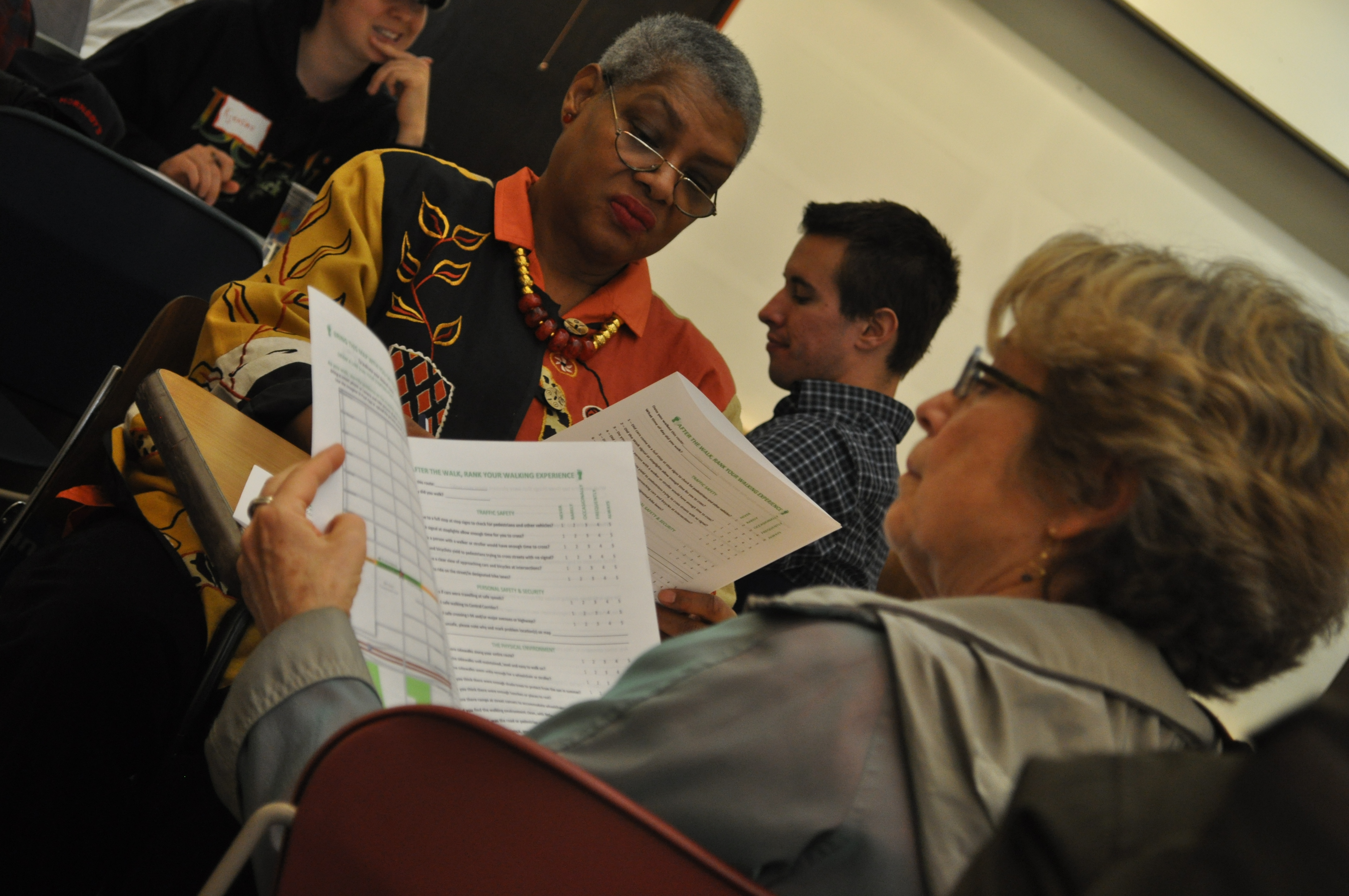 Marry Morris (front) looks over the Walkability survey draft before venturing into the streets to complete it.

Walk. Observe. Connect. That’s the plan for the new Walkability Survey program sponsored by the  District Councils Collaborative. On April 22, 36 activists of the Central Corridor, young and old, gathered to strategize community-organizing efforts to give local residents a voice in the LRT construction project and issues surrounding its accessibility.

Lisa Tabor, Founder and President of CultureBrokers Foundation knows that not all of the mass transportation issues will be resolved with the installation of the LRT.

“Putting a big resource somewhere doesn’t solve problems. People won’t use the resource if they can’t get there safely,” Tabor said.

Mary Morris, a member of the Ramsey Hill Association and Summit University Planning Council, is concerned that safety issues in the neighborhoods could limit the success of the LRT.

“The city is building this over a two year period, and to maximize its usefulness, people have to be able to access it,” Morris said.

In order for everyone from the age of 7 to 77 to feel safe and able to get to their destinations. many physical and neighborhood factors that affect pedestrian safety need to be considered.

Anne White, District Councils Collaborative Governing Council Member and Walkability Survey coordinator, emphasized the dangers of the crossings over and under Highway 94, steep hills, lack of lighting at night and neighborhood feel.

CultureBrokers® Foundation, DCC of Saint Paul and Minneapolis, and Saint Paul Riverfront Corporation will be launching resident-led Jane Jacobs Walks on May 6. They hope to get residents out walking and talking in their neighborhoods, telling their stories, and completing the Walkability Survey, which focuses on documenting challenges on walks from neighborhood locations enroute to future LRT stations.

According to Carol Swenson, Executive of the DCC, the launch of the Walkability Survey with the Jane Jacobs Walks was a natural partnership.

“The Jane Jacobs Walks brings out the community’s knowledge, Swenson said, “The community knows the community best and the interactions with the Walks create a great opportunity to for the neighbors to share that knowledge.”

The nation-wide Jane Jacobs Walk program is organized by the Center for City Living to celebrate the legacy of Jane Jacobs, an urbanist and activist of the 1950s who saved neighborhoods in New York from destructive modernist developments by self-organizing and giving residents their own voices. Jacobs said, “Cities have the capability of providing something for everybody, only because, and only when, they are created by everybody.”

The DCC has realized the great synergy and enormous value that comes from neighbors walking and completing the surveys together.

“When we sent people into the neighborhoods who didn’t know each other to fill out the surveys together, it was marvelous,” White said. “We could see the solidarity of people walking, talking and building cohesiveness.”

Tabor believes in the longevity and overall systematic change the surveys and walks could bring to the community because there is a balance of gathering of data and building relationships.

“There is only a window of opportunity with written data,” Tabor explained. “That reach is not as wide as when people walk through their own neighborhoods and see the issues than rather than just seeing the compiling data on a sheet of paper”

From the launch date and Jane Jacobs Walk Celebration on May 6 through May 28, the sponsoring organizations are looking to host multiple walks, including local celebrity walks, in hopes of receiving 100 completed surveys for 15 LRT stations.

With the completed surveys and media data, the DCC will find the worst accessibility conditions and show the cities where the priorities lie in what work is needed and where.

If you would like to organize a walk or help be a part of completing the 1,500 surveys learn more here.