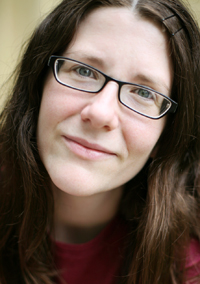 Kimberia Sherva is a smart, funny and energetic mom of two, a woman who not only picked up her own power, she grabbed it, wrestled with it when it became unruly, and absolutely refused to let it go. She is the force behind the upcoming SlutWalk Minneapolis.

A brief primer on the SlutWalk movement: In January of 2011, a Toronto police officer, Michael Sanguinetti, told a group of college students that “women should avoid looking like sluts in order not to be victimized.” What began as a grassroots plan to protest the police attracted widespread attention (due in no small part to the action’s purposely confrontational name), and an estimated 1,500 people gathered on April 3, 2011 to raise awareness of sexual stereotypes and the persistence of victim-blaming in Canadian society. Since then, SlutWalks have been replicated in London, Stockholm, and Sao Paulo, with walks in the works in Mexico City, Johannesburg, and Bishkek, Kyrgyzstan.

Sherva thought our Twin Cities community needed a SlutWalk of its own, and she took on the challenge of planning it. In addition to raising her two sons, Sherva is a full-time student with a work-study job, and she’s neither an event planner nor a political activist by training. She’s learning the ropes one social media account at a time.

When I told her about the “pick up your power” theme of this month’s Minnesota Women’s Press, she admitted, “It’s hard to pick up personal power. It’s hard, and it’s scary, and [women have] been conditioned to play nice.” So why do it? For one thing, Sherva said, “I have always believed that the women of today stand on the shoulders of the women of yesterday,” and organizing a local SlutWalk could repay that feminist debt. But she had another, even more important reason: “This SlutWalk isn’t just about tearing down the word slut, it isn’t just about fighting against victim blaming and society’s messages about rape,” Sherva wrote on the event’s Tumblr blog. “It’s about being able to say, ‘I was raped,’ ‘I was sexually assaulted.’ And being believed.”

Sherva continued: “I know exactly why women walk in the SlutWalks. I know how they feel. And I know that when our event happens, it’s going to be cathartic … it’s going to give a voice to the rage and the hurt and the bewilderment of being blamed for my rape, of not being believed, of jumping through the hoops of the legal system, and being told that I wasn’t raped. … I’ve been questioned, I’ve been asked ‘What did you do?’ and I’ve been flat out and out called a liar.”

The process has been just as hard and scary as Sherva predicted. As of this writing there have been hangups with the Minneapolis permit process, resulting in the date for the SlutWalk being shuffled around the calendar; glitches in the official Facebook invitation, which went haywire once the event received over 4,000 RSVPs; objections from feminist allies who hate the use of the word “slut” in any context, even an anti-rape one; and worse still, an outpouring of hurtful comments from trolls who reaffirmed Constable Sanguinetti’s opinion in no uncertain terms (Sanguinetti has since apologized). The stress has been enormous, but not overwhelming-Sherva has faced each obstacle with grace and determination, gathering her power as she goes. During SlutWalk Minneapolis I’ll be by her side, making my own voice for equality and freedom heard.

For as Sherva told me, “We ALL have the power to change the status quo.”

Shannon Drury lives in Minneapolis with her family and is a self-described radical housewife.