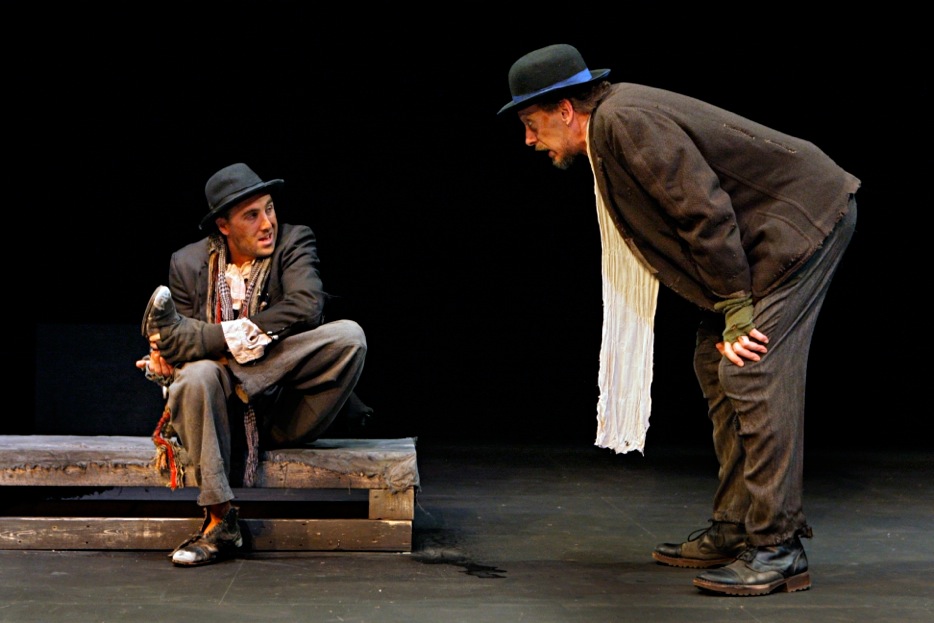 Anyone who has taken an intro to theater course has been required to read Samuel Beckett’s Waiting for Godot. Beckett’s play was first presented in 1953, inaugurating “Theater of the Absurd” as a poignant genre. It could be described as Abbott and Costello meet Edvard Munch’s The Scream.

I read the play over 30 years ago and I remember it as the original Seinfield: a show about nothing. But the humor and angst generated by this meaningless existence is brought out by the Jungle Theater’s impressive production of this modern classic. It is an unqualified treat for anyone wanting to experience this existential work by Beckett.

Despite the play’s message on the ultimate meaninglessness of existence, Director Bain Boehlke uses uncanny artistry to bring out the play’s humor. At one point, the two main characters sit on the lip of the stage and engage in verbal horseplay that rivals the famous Abbott and Costello’s “Who’s on First?” skit.

Boehlke also designed the play’s setting, which captures the essence of the playwright’s theme. It might be called “post-apocalyptic” but that would be missing the point entirely. Beckett was staging a post-apocalypse of a mind that has grasped the ultimate meaninglessness of existence.

The play features two everyman characters: DiDi and Gogo, ably played by Jim Lichtscheidl and Nathan Keepers. The two characters engage in absurdly grotesque and humorous antics as they wait for their rendezvous with the ever mysterious Mr. Godot. The characters are portrayed as quite likeable fellows and, by the beginning of the second act, DiDi is practically glowing against the bleak background but turns desperate by the end. This is a very modern interpretation. My reading of the play 30 years back was that the two characters are neither jovial nor desperate but, rather, bored with their existence. But 30 years of living leads to new insights into this play that I was not capable of in college.

Charles Shuminski is extraordinary as Lucky and becomes the focal point of the play.  Shuminski’s character is a paramount example of humanity’s affliction. Schuminiski infuses Lucky’s monologue with meaning and expression that belies the fact that it is pretty much nonsense poetry. Allen Hamilton portrays a lively Pozzo who tries our patience as he attempts to garner our sympathy about how his slaves force him to be a cruel master. Lucky and Pozzo’s relationship brings to mind the Eurythmics line: “Some of them want to abuse you, some of them want to be abused.”

Boehlke does a masterful job of putting his twists on the multiple possible meanings of Godot. As the show fades to black at the end, you know you can come back the next day, see the same show and take something different away from it.