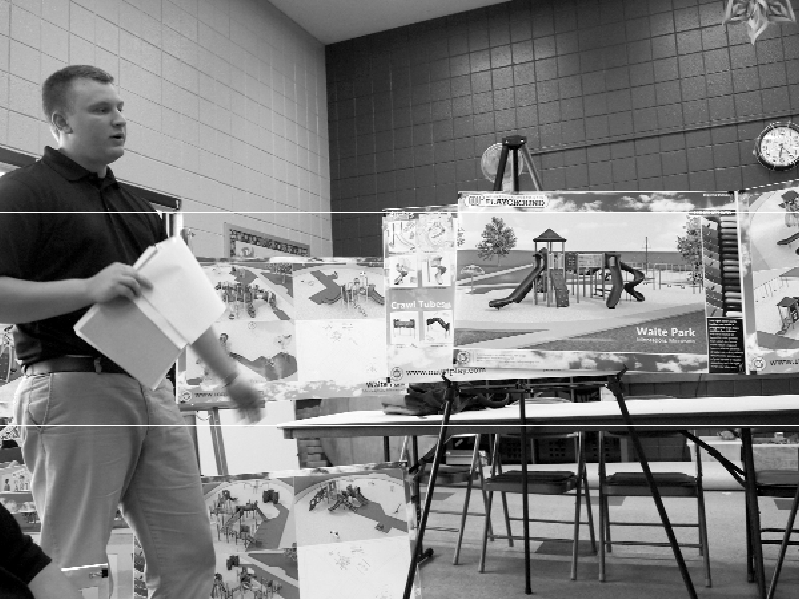 Representatives from Minnesota Wisconsin Playground showed the results of their dot voting exercise, in the background, and an apparatus that incorporates slides that encourage competition, in the foreground.

An 18-foot high climbing net, a “tilted skyrunner,” “double wild” slide and more attractions will be coming to Waite Park’s playgrounds in a $200,000 project that could get underway in mid-September. It’s a good example of a park that doesn’t need the typical additional $100,000 to $150,000 for infrastructure, the “play containers” are already there, along Garfield St. NE a block north of 33rd Avenue NE.

A new handicap-accessible wading pool is also planned, and there will be public meetings Sept. 24 and Oct. 8 to get public comment toward those plans.

At an Aug. 1 meeting called to look at what kids and adults favored, one woman asked about a key piece of that infrastructure—the need for drainage in the necessarily flat area. “That’s the plan,” said Jon Duesman, the construction manager with the Minneapolis Park and Recreation Board (MPRB). “A drain tile system appears on the old site drawings. Hopefully, it’s there, we may find that it’s there and broken.” They could add additional lateral lines to help the area drain faster.

Duesman also explained that while the concrete curbing that defines the containers would stay, the walks have settled and cracked, and need modifications for handicap accessibility. Rubber surface for wheelchairs will be poured on top of new concrete. The installation depends on weather, as the temperature needs to be at 60 degrees or above.

Two representatives of Minnesota Wisconsin Playground, the vendor, showed the results from sessions where kids placed dots on illustration boards to indicate their favorite equipment. From there, they developed a design which the dozen people attending Aug. 1 seemed to like.

One entire container is taken up with the 18-foot climbing net. They were asked about safety, the potential for an 18-foot fall, and potential for vandalism. They explained the net design is such that anyone falling would be caught by other elements of the web, to where there is no more than a four-foot fall possible. The netting has a core of steel and the coating is easily mended with heat. Sixty-two kids can be on it at once, they said.

Throughout the planning process, planners and residents have agreed that the existing play area for 2- to 5-year-olds is in decent shape and should be left alone, perhaps painted to match the new equipment which will be focused on older kids. “The more swings the better” was another key comment. “Tire swings, kids love ‘em.” When asked if they use the playgrounds even in November and December, adults nodded.

From there, discussion ensued about the color palette, blue and butterscotch, which are both Waite Park School colors and Edison High School colors. But there was also discussion of introducing burgundy elements to complement the physical school building.

Fourth grade teacher Steve Holm, who’s been in the system for 28 years, said the school kids will be the most affected by the playground construction. But “we can provide games [during construction], they don’t have to be on the playground,” he said.

The wading pool will most likely be replaced in fall 2014 or spring 2015. Duesman started that discussion with sample designs from recent projects at Farview and Hiawatha parks, which had been without pool facilities because the existing pools had actually failed before the replacement could be planned.

Resident Connie Stauffer said there’s a need for a warming house, and the pool area would get more use if a building there could open up to a pavilion with grills. Parents picnic, kids play in the pool. Park Commissioner Liz Wielinski said that amenity would be something that would need additional fundraising, and encouraged people to start working with the neighborhood organization and service clubs to look for those extra sources.

Wielinski added that one resource is the park system’s in-house carpentry staff, which handled demolition on the Marshall Terrace playground to bring that project back within budget.