It was standing room only at the House Government Operations and Elections Committee April 16 as members take up the Vikings stadium bill. (Photos by Andrew VonBank)

The consensus after a negative House committee vote was that a “Hail Mary” pass may be about the only chance the Minnesota Vikings have left to get a stadium bill passed this legislative session.

Despite the session likely entering its final days, the stadium outcome remains cloudy as the pressure to reach a deal amps up.

A very clear message has been sent that next year is too late for a deal, Gov. Mark Dayton said April 19 after he spoke with NFL Commissioner Roger Goodell and Art Rooney II, chairman of the league’s stadium committee, by phone for about 20 minutes.

“If there’s a willingness to do it, now is the time,” Dayton said.

Goodell and Rooney are expected to fly to Minnesota to meet with Dayton April 20. The governor hopes legislative leaders will also take part. Without a deal this year, Dayton believes the league will have to seriously consider the viability of this market.

The meeting would be four days after the House Government Operations and Elections Committee failed to approve a bill that calls for funding a new stadium that would house the NFL team. The April 16 vote was 9-6 with five of nine Republicans voting for the bill and just one of six DFLers.

“We can’t pass the stadium by ourselves,” House Speaker Kurt Zellers (R-Maple Grove) said the next day. “This has always been a bipartisan process.”

Sponsored by Rep. Morrie Lanning (R-Moorhead), HF2810 calls for a $975 million fixed-roof stadium to be built primarily on the Metrodome site on the eastern edge of downtown Minneapolis. The team would cover $427 million of construction costs; the state $398 million; and Minneapolis $150 million.

Money from electronic pull tabs, electronic bingo and tipboard games would be used to pay the state’s share of the cost. Supporters noted that charities would get tax relief and more gambling proceeds while the state also would get more revenue. Lanning said $42 million per year would be needed to pay debt service on the bonds. The bill contains four back-up proposals in case, as some legislators predict, electronic gambling devices do not meet revenue estimates.

During his presentation, Lanning said four stadium funding proposals have been put forth in the past seven years, but this was by far the best. “This proposal has had more work and effort going into it than any of the other past bills. It has been vetted more; it has been tested more than any other bill. … We need to get this bill on the floor of the House and Senate where the members can once and for all decide if we’re going to do something relative to this stadium issue or not.”

Lester Bagley, the team’s vice president of public affairs and stadium development, appeared frustrated when he spoke after the vote, saying the team has done everything it’s been asked, and after more than a decade of trying there still hasn’t been a vote on the House floor. “This sends a strong message to the Vikings and the NFL,” he said without elaborating.

He refused to issue an ultimatum about the team departing the Upper Midwest. “I won’t speculate. We’ve got time and people trying to move it forward,” he said. “To have an NFL team in this market we have to address this issue.”

The bill’s companion, SF2391, sponsored by Sen. Julie Rosen (R-Fairmont), awaits action by the Senate Local Government and Elections Committee. It’s been sitting in the committee for a month. In addition, a legislator could try to amend the stadium language onto another bill.

Bagley said the team would continue to push the proposal as long as the Legislature remains in session.

Lanning acknowledged that the issue isn’t going away anytime soon, and will be a constant topic during the upcoming election season. “The only way this will go away is if we get it to the floor and vote it up or down.”

“While this may not be the perfect package yet, I think it’s worthy of continuing forward,” said Rep. Carol McFarlane (R-White Bear Lake).

Before each voted against the bill, Rep. David Hancock (R-Bemidji) expressed concern about expanding gambling in the state, while Rep. Bev Scalze (DFL-Little Canada) noted the proposed gaming revenue going into the General Fund would better be spent paying off some of the $2.4 billion the state owes K-12 education. 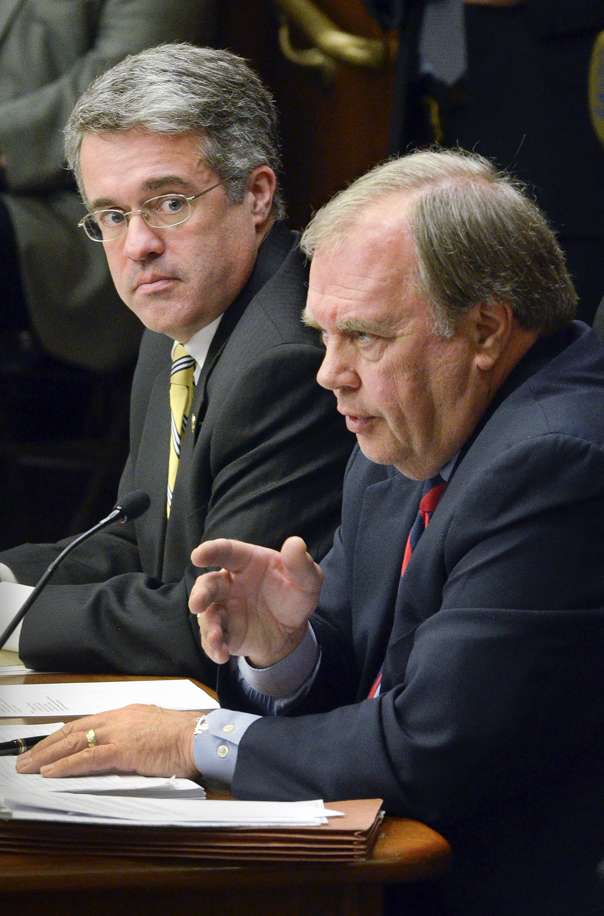 Right: Rep. Morrie Lanning, right, and Rep. Terry Morrow testify before the House Government Operations and Elections Committee April 16 in support of a bill that would provide a stadium for the Minnesota Vikings. Lanning is sponsor of the bill.

The team has played in the Metrodome since 1982, but team officials say the facility is antiquated and does not provide the needed revenue to remain competitive, nor does it offer a top-notch fan experience.

Supporters said this is a jobs bill, citing the 3.4 million man hours from the construction industry that would be needed to build the facility.

Bagley said there is “no doubt” that the Vikings are Minnesota’s team. “More than half of our residents of Minnesota follow the Vikings every season. Over the last three seasons the team has averaged a 65 television share which means 65 percent of televisions are tuned to Vikings’ games. When you add our radio audience of more than 700,000 and the 63,000 at the stadium, approximately

3 million Minnesotans follow the Vikings every Sunday. There’s no other event or happening in Minnesota that can come close.”

In addition to quality of life issues, Morrow said if the team was to leave, Minnesota would lose an estimated

$800 million in state income taxes over 30 years from players, staff and visiting players.

Bagley pointed out that the Metrodome was built with zero cost to the state, and since its opening has generated $340 million in tax revenue to the state.

Ted Mondale, chairman of the Metropolitan Sports Facilities Commission, said that without the Vikings, the Twins Cities image will suffer. “Sooner or later if we don’t act on this they will leave and we will be a major league city that will look like a B-class city. … The state in this deal brings in $450 million more than it puts in over the 30-year lifecycle of this funding.”

Bagley said the $427 million team capital contribution would be the third-largest in league history, and the $13 million in annual rent would be the league’s highest.

Nonetheless, he and Steve Poppen, the team’s chief financial officer, faced some pointed questions from members about the team’s funding contribution, including why the state should help out a billionaire owner who could pay for it all himself.

10 dates a year. The rest of the year it could be used for amateur sports and other activities. “We have an opportunity to leverage the third-largest private contribution up front to make sure we have a facility that can be used by everyone going forward with all the events consistent with what currently occur at the Metrodome.”

Rep. Ryan Winkler (DFL-Golden Valley) expressed displeasure that the team would not be transparent about its net worth, especially when its value would increase with a new stadium. “As representatives of public taxpayers, how do we know we’re getting a good deal? … If we knew better how much you were going make off this deal, we could better judge and better negotiate how much of this facility should be funded by the taxpayer. Right now we’re kind of negotiating in the dark.”

Poppen, who said naming rights would likely net the team $4.5 million to $7.5 million annually, said the team has had its financial statements reviewed at the request of the governor’s office and the business community in a confidential manner. “We believe this is a good deal for Minnesota.”

Committee Chairwoman Rep. Joyce Peppin (R-Rogers) successfully amended the bill to require that Minneapolis voters have a say in their city’s plan to spend $150 million for the stadium. An amendment to the city charter approved by voters in the 1990s states that no more than $10 million can go toward financing a professional sports facility without voter approval. The bill, as proposed, would invalidate that provision.