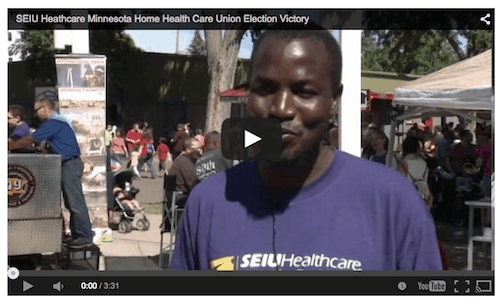 The first minimum wage increase in nine years and the union vote by 26,000 home health care workers were among the highlights for Minnesota’s workers in 2014.

The year was marked by major organizing efforts, both inside and outside the workplace, particularly among low-wage workers. The 2014 legislative session featured many gains, including passage of the minimum wage increase.

A hopeful tone was set in early February, when the world-class musicians of the Minnesota Orchestra returned after being locked out of their jobs for nearly 16 months.

Not long after, hundreds filled the state Capitol for a rally in support of the minimum wage increase. Governor Mark Dayton called on the Legislature to act – and lawmakers voted to raise the wage to $9.50 by 2016, the first increase since 2005.

Workers were key to keeping up the pressure, with many coming to the Capitol to speak with their elected officials. For example, more than 1,000 AFSCME Council 5 members and retirees took part in their union’s Day on the Hill.

Groups such as A Minnesota Without Poverty used creative methods, including a flashmob at the state Capitol, to communicate their message.

At the bargaining table and in the streets
Throughout 2014, Minnesota unions continued their traditional work of bargaining contracts and representing workers, while also branching into broader community issues.

Meatpacking workers in Worthington, represented by the United Food & Commercial Workers, won a new contract in June after several months at the bargaining table and threatening to strike.

Through an innovative campaign that involved parents and other community members, the St. Paul Federation of Teachers achieved a new contract that reduced class sizes and improved the quality of education.

Minneapolis teachers took part in a community conversation on equity by sponsoring a march in August featuring the Rev. William Barber II, leader of North Carolina’s “Moral Mondays” movement. Participants said communities must confront the deep-rooted problems of racism, inequality and marginalization of the poor.

Many 2014 wins involved workers showing solidarity, such as when members of the Minnesota Association of Professional Employees took a break from their annual Delegate Assembly to show support for workers at the Ramada Mall of America in their contract negotiations.

In October, members of a coalition of 28 Building Trades unions launched a “Shop at your Own Risk” ad campaign at Ridgedale Mall to warn shoppers of potentially serious safety hazards at the mall.

The Minnesota Nurses Association held a rally and candlelight vigil at the state Capitol to draw attention to the lack of uniform and adequate safety procedures for dangerous viruses like Ebola at hospitals around the state.

Throughout the year, postal unions held actions to preserve the U.S. Postal Service, includingdemonstrations to save the mail-processing facility in Duluth.

Workers mobilize and organize
Early in the year, “Fair Wage Wednesday” actions in Minneapolis put the focus on employers who were not paying a living wage.

In August, Minnesota’s home care workers etched a new chapter in the state’s history when they voted for representation by SEIU Healthcare Minnesota. Ballots were mailed to 26,000 people in the largest union election in Minnesota history.

Airport workers intensified their efforts to improve their wages and working conditions and win union representation. They mounted a campaign for a $15-an-hour minimum wage at Minneapolis-St. Paul International Airport.

At the end of the year, they won a major victory when the Metropolitan Airports Commission voted to require all contractors at the airport to provide paid sick leave to employees.

The difficulties of organizing in today’s environment were made clear, however, when Delta Air Lines fired baggage handler Kip Hedges for speaking up for low-wage workers at the airport in a Workday Minnesota video. He is appealing the termination.

On the political front
Throughout the summer and fall, organized labor mounted a massive effort to support labor-endorsed candidates in the November elections.

In September, union members from across the state gathered in St. Paul for the biennial convention of the Minnesota AFL-CIO, where they showcased organizing victories and called for action to create good-paying jobs and invest in infrastructure and public education. They also heard from several labor-endorsed candidates.

November’s election results were mixed. The labor movement’s efforts helped lead to key victories by Governor Dayton, U.S. Senator Al Franken and others, but fell short of keeping DFL Party control of the Minnesota House. In particular, the results revealed the need for a larger union presence in Greater Minnesota, where several endorsed candidates were defeated.

Unfinished business
At the start of 2014, unions were gearing up for a new battle on international trade. The fight over so-called “fast track,” also known as trade promotion authority, was pushed into 2015, when Republicans will control both houses of Congress. President Obama, with many supporters among both Republicans and Democrats, is seeking to jam through Congress trade treaties with European and Asian nations that lack worker rights and protections for citizens and consumers.

A year ago, a broad coalition that included organized labor said the state needs to invest in a complete transportation system. The 2014 Legislature failed to act – and transportation is expected to be a major agenda item when the 2015 session convenes next Tuesday.