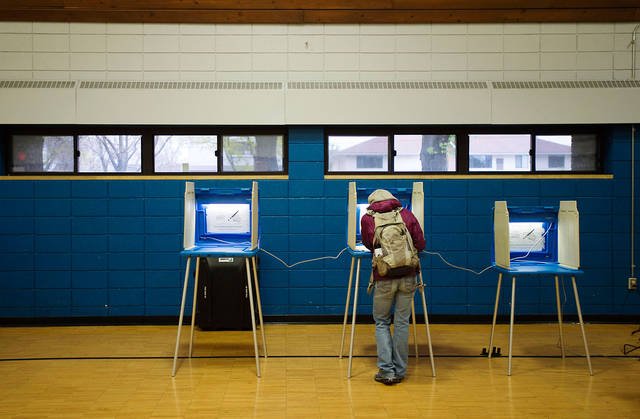 This year, with an open mayoral field of 35 candidates, the process was more complicated.

Tuesday marked the second time Minneapolis used the system, in which voters can list their top three choices for each office.

If there isn’t a majority on the first vote count, the least-popular candidate is eliminated. Ballots listing that candidate as the top choice then become votes for the candidates listed in those ballots’ second-choice spots.

Votes are then recounted, and the process repeats until one candidate reaches a majority.

All races should have a winner by Friday, said Cam Gordon, elections committee chair and Ward 2 councilman.

In 2009, it took more than two weeks to count the municipal ballots by hand, but this year’s electronic voting booths will make the process smoother, he said.

Despite non-immediate results this election, proponents of ranked-choice voting still say the system is a good one.

Jeanne Massey of FairVote Minnesota, which advocated for ranked-choice voting, said even though it takes longer than
traditional voting methods, the process was a success.

“It’s just a one-day delay in knowing the final outcome,” she said. “I don’t think that’s going to be a setback in anybody’s mind.”

Minnesota Public Interest Research Group also continues to support the system, regardless of the stall in results, said Kate Dobson, co-chair of the University of Minnesota chapter.

Dobson said students saw the advantages of the system Tuesday and seemed prepared to use it when they entered the polls.

“I read about it beforehand, so I didn’t have much trouble,” he said.

Some voters even brought sample ballots mailed out by the city to the polling place to follow along as they voted, he said.

Other polling places had similar experiences with the system.

Sid Teske, who’s been an election judge for more than 10 years, said he expected confusion from voters but said the process was clearly understood when voters came in Tuesday.

Others took advantage of their extra choices to vote for fringe candidates.

“I put [Captain Jack Sparrow] as my third choice because I didn’t think it was that big of a deal,” said Zach Malecha, Augsburg College youth and family ministry senior.

Gordon said overall, the process was effective, but the city will look at making some changes for the next election, including increasing the number of ranking options.