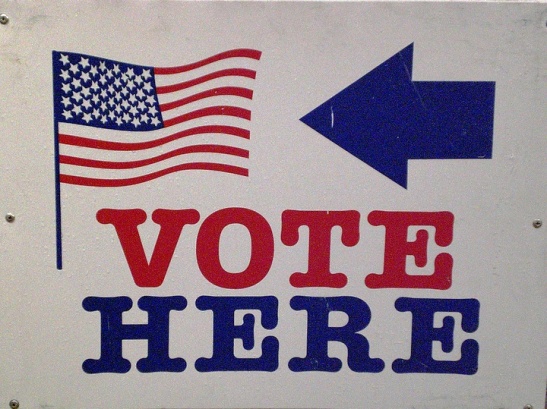 The proposed Voter ID amendment has been in the news a lot lately and I’ve been hearing people say things like, “What’s the big deal with requiring an ID to vote? Heck, I need an ID to get into a bar or go to the doctor.” When I hear those questions, I can’t help but think about the experiences I’ve had at my own polling place.

Before starting law school at the University of Minnesota in 2004, I moved to downtown Minneapolis. Orientation leaders encouraged incoming students to fill out voter registration cards so we could vote in the fall elections. As most Minnesotans know, registration is a simple process. But one of the lessons I learned outside the classroom that year is that voter registration is far from simple for homeless citizens. A proposed amendment to the Minnesota Constitution would, in effect, disenfranchise many members of this vulnerable group. 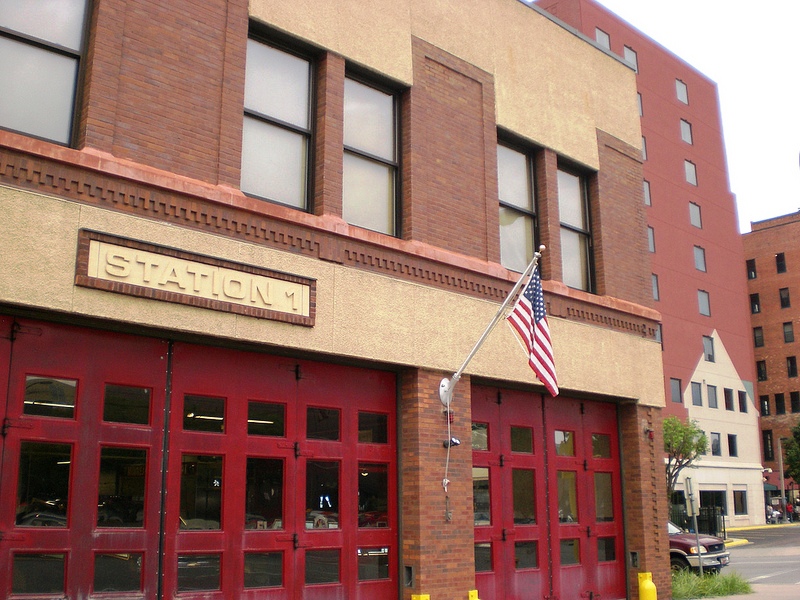 When I received my registration confirmation card in the mail, I learned that my new polling center would be Fire Station No. 1 at the corner of Portland Avenue and Third Street. Just across the street is the ten-story building that houses People Serving People (PSP), the largest family-focused temporary and emergency shelter for homeless Minnesotans. My house district, 59B, includes many other homeless shelters as well: Harbor Light Center; Mary’s Place; YouthLink; and Families Moving Forward. It’s no surprise, then, that 59B has the dubious distinction of leading the state with an estimated 6,800 registered voters who lack current or valid photo identification—outpacing the next-highest district by nearly 3,000 voters. Approximately 84,000 Minnesotans do not have a state-issued ID, and 131,000 have an ID that does not show their current address.

On Election Day in 2004, and again in 2008, I took time off to help some PSP residents go through the Election Day voter registration process. You don’t need a permanent address in order to vote in Minnesota. Current law allows a voter to register with a non-current identification card and a current utility bill, but that provision that doesn’t help people who live in shelters and don’t pay utilities. Minnesota Statute 201.061 subdivision 3(a)(4) allows shelter employees to vouch for residents and also authorizes registered voters like me to vouch for voters who live in my precinct.

When the Minnesota Legislature decided to place the “Voter ID” amendment on the ballot this November, I thought back to my experiences vouching for my homeless neighbors. It’s not easy for homeless citizens to exercise their right to vote, but the proposed amendment would erect further obstacles to their participation in the political process by requiring “[a]ll voters voting in person [to] present valid government-issued photographic identification before receiving a ballot.” Photo ID may seem like a simple, straightforward requirement. Not so for Minnesota’s homeless citizens.

Here are some lessons I’ve learned while vouching for my homeless neighbors:

(1) Homeless citizens are committed to the democratic process.

I’ve been impressed by the strong commitment PSP residents have to civic participation. They were excited to vote and took their civic duty seriously. Many brought along their children, who were able to cast their own Kids Voting ballots. Kids Voting observes that “[t]his simple act takes the mystery out of the voting process and instills a sense of pride, accomplishment and responsibility which will stay with the student into adulthood.” These homeless families came out of the polling station beaming with pride, glad to add their voices to our democratic system.

I was equally impressed by PSP residents who were unable to vote. One family had moved to Minnesota just one week before the election and understood they weren’t yet eligible to vote. Another PSP resident told me he was eager to vote but couldn’t because he was still “on paper”—meaning his civil rights had not yet been restored. There was no hint of any desire to cheat the system or commit “voter fraud”; these citizens frankly accepted that they would have to wait for the next election to cast their vote.

James, a resident at Our Saviour’s Housing shelter in Minneapolis, described why he votes. 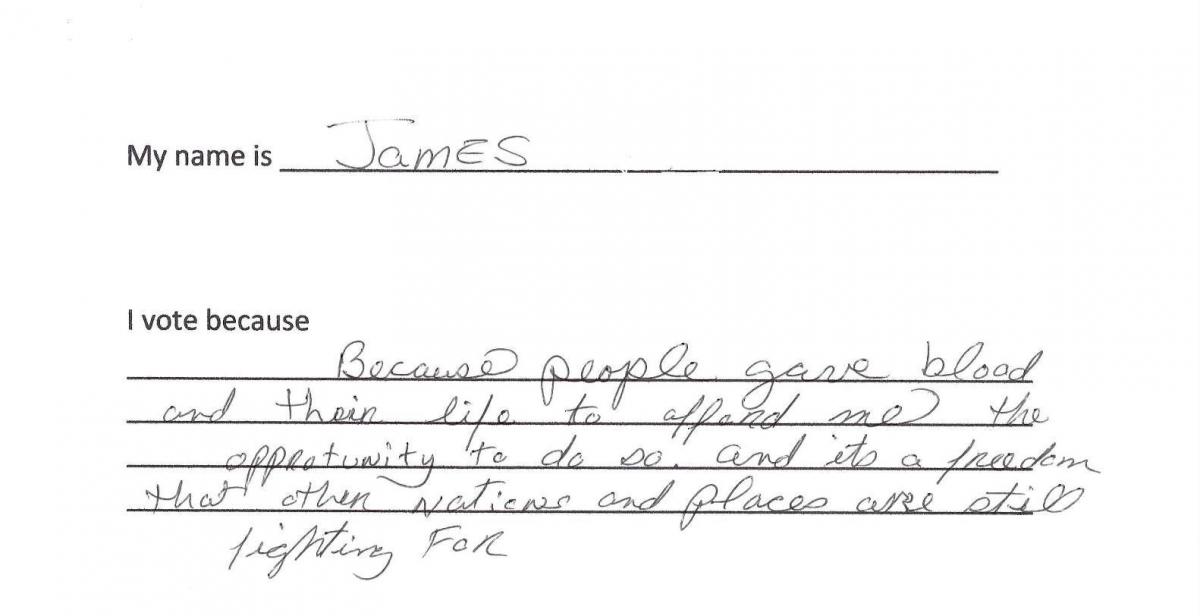 Listen to James discuss why he values his right to vote:

The average length of a family’s stay at PSP is 37 days. So PSP’s residents don’t typically have time to obtain driver’s licenses or other identification to reflect their shelter address. The proposed amendment would require the state to “issue photographic identification at no charge to an eligible voter who does not have” a “valid government-issued” ID, but it’s not clear how quickly such IDs could be provided. 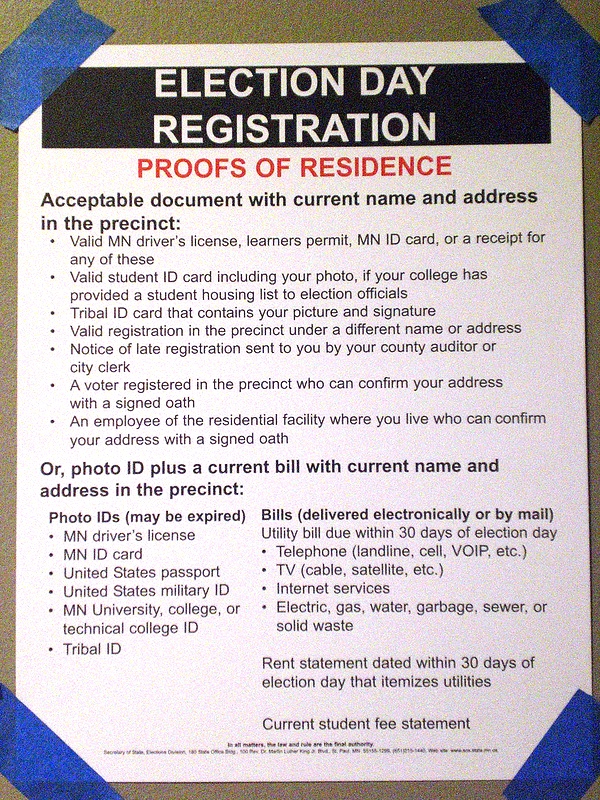 “[T]he term ‘free’ conceals the true cost of the photographic identification requirement,” Minnesota Supreme Court Justice Paul Anderson observed in his dissent last month. “The cost of obtaining the required supporting documentation, especially for elderly and vulnerable populations, can be substantial.” At the Minneapolis Homeless Connect event this May, one third of attendees sought help obtaining IDs or birth certificates.

An employee at Our Saviour’s Housing explains the burdens homeless people face in obtaining a “valid government-issued” ID:

Our shelter residents don’t have a permanent address. They may not currently drive, travel, work, go to bars, or do any of those other ID-requiring things most of us take for granted. In fact, one of the first things many shelter residents request from our staff is help acquiring an ID. That can be a lengthy process because their supporting documents have been lost or stolen during countless moves. . . .

Once lost, replacing these documents is not easy [or] cheap. The amendment makes the photo ID itself free, but not the supporting papers. A Minnesota birth certificate costs $26. Obtaining documents such as this (when that’s even possible) or the photo card requires a trip to the county government center. That necessitates transportation and time off from a job that probably doesn’t offer paid time off. . . .

Even if a homeless individual acquires proper identification, what address to put on it? Most shelters and housing programs limit stays. Some offer just one night at a time, making it impossible to count on residing in the same place [on Election Day] when applying for an ID.

(3) The Voter ID amendment would place homeless citizens at an unfair disadvantage in exercising their fundamental right to vote.

Voting is a human right, not a privilege. We shouldn’t blame parents facing the stress of being homeless, living in a shelter, raising kids, keeping a job, and seeking long-term housing for not having the time or resources to jump through myriad hoops in a race to get an ID before Election Day. PSP residents are far from idle; I’m exhausted just reading about this “typical day” at the shelter. But if the amendment passes, we’ll send a message to homeless citizens: If you want to participate in the democratic process, you must prioritize plowing through bureaucratic paperwork to get a soon-to-be obsolete ID over far more pressing tasks that have tangible, long-term, socially beneficial consequences—like finding permanent shelter and obtaining steady employment.

On November 6, I’ll be back at PSP. I’ll continue my practice of not talking politics, but I’ll be silently hoping this won’t be the last time I’ll have the opportunity help some of my homeless neighbors exercise their right to vote.

Have you talked to your family, friends, and neighbors about how the proposed Voter ID amendment would restrict voting rights? The Advocates for Human Rights recognizes that voting is a fundamental human right and opposes the proposed amendment. Visit Our Vote, Our Future for more information. 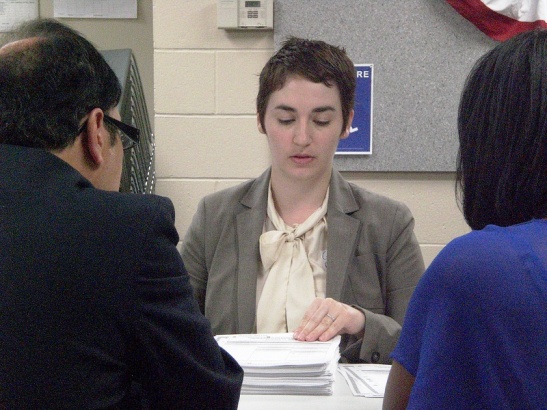 (All photos by Amy Bergquist)

Amy Bergquist is the International Justice Program Staff Attorney at The Advocates for Human Rights.