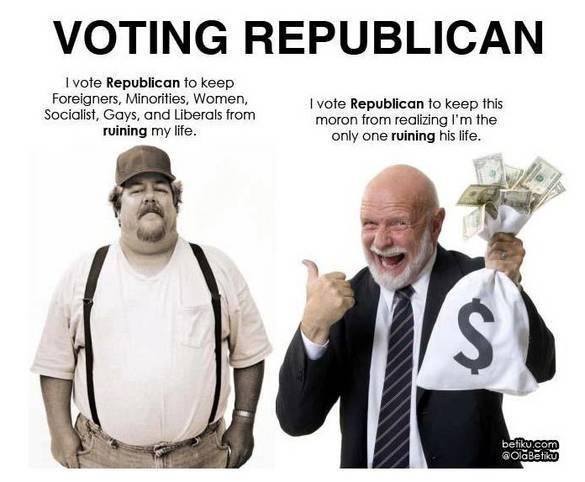 The U.S. federal government shutdown of 2013 started a year ago yesterday, and ran through October 16. Believe it or not, those who don’t happen to be wealthy white men were particularly impacted. It was wildly unpopular politically; congressional generic ballots saw huge jumps in Democrats’ favor when it was over, but that unfortunately hasn’t lasted. Americans’ short political memories are indeed the despair of many; if not for that, right-wing conservatism would be long gone as a political force, and practically everyone would be better off as a result.

There are indications that congressional Republicans will be looking at another shutdown threat as soon as May 2015, when the extension of the Highway Trust Fund authorization expires. Hopefully President Obama understands by now that people who behave with the psychological maturity of your typical two-year-olds are not to be allowed to have their way, or everything will only get worse.

Anybody who is planning to vote for any Republican is probably voting for one or more additional government shutdowns. So is any would-be Democratic voter who chooses to “sit this one out.” Believe me, I do get how frustrating Democrats’ antics, from the White House on down, often are. But giving the crazies more power will just push things downhill. There is absolutely no indication that it ever works politically to “send a message” or “provoke a backlash,” and things don’t have to get worse before they get better. Obama and Congress would still be plenty disappointing for progressives, but things would be significantly better if we had the Democratic House majority we lost in 2010, because Democrats stayed home.

It’s probably quite a bit more unlikely, but it’s far from unthinkable that GOP control of the Minnesota House could result in another state government shutdown, as well.