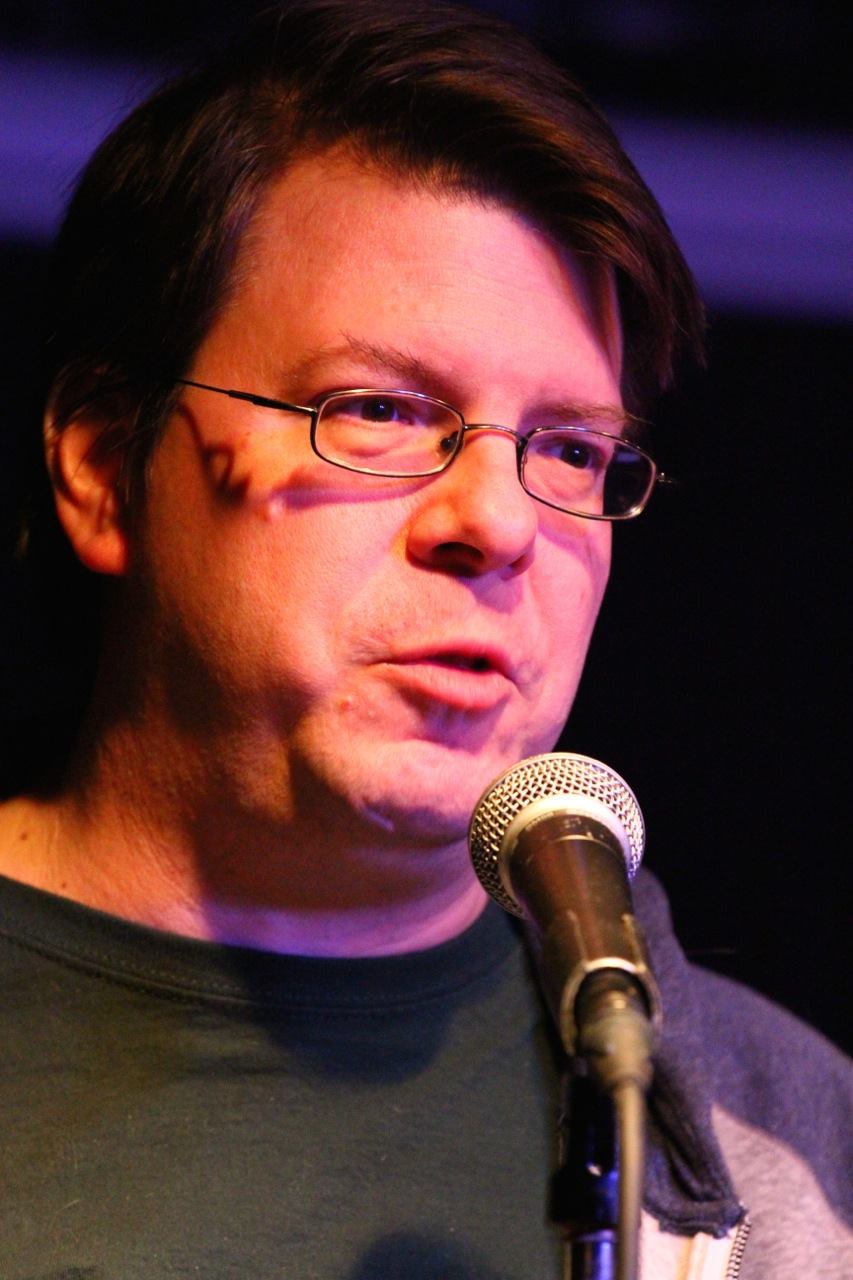 One of the things that has always impressed me about Minnesota is its vibrant literary community and its ability to make space for so many unique and distinctive voices. One of my favorites is writer Tim Wick, who is the artistic director of Fearless Comedy Productions.

Over the years, Tim has produced several successful shows at the Minnesota Fringe festival including “The Complete Works of William Shatner (abridged)” and “Story Time Time Bomb.” He has written comedy sketches for CONvergence and is a podcaster and blogger. You can find many examples of his writing at petsnakereggie.com. One thing that I particularly respect about Tim’s work is his philosophy of theater production. “You shouldn’t be producing theatre if you are afraid to take risks,” he says. “By taking risks, we grow as artists. By playing it safe, we will never achieve what we can if we are fearless.”

Shortly after this year’s CONvergence, I had a chance to talk some more with this wonderful wit and find out how he got started and where he’s going next.

Can you tell us a little about yourself, and how did you develop an interest in comedy, especially in a way that intersects with the science fiction and fantasy community?

I’m a comedian and a playwright.  I’ve always been interested in science fiction and fantasy and I was one of the people who helped found CONvergence back in 1999.  We’ve always tried to include funny sketches as part of the opening and closing ceremonies and over the years, I became one of the primary writers for those sketches.  I really enjoyed writing geeky humor for geeky audiences. Fans are great.  You can explore genre properties in ways that normal audiences would never understand.

But I also think that science fiction and fantasy are becoming far more mainstream.  An average audience gets James Bond jokes.  Or Avengers jokes.  Or even Game of Thrones jokes.  The way my interests have begun to intersect with mainstream popular culture has made it a lot more fun to write comedy.  I am writing for a lot more people than I used to.

Every time I check in on you, it seems like you have a million projects going on at once. What are your big top three for the rest of the year?

Right now, I’m writing and producing a show for the Minnesota Fringe called “The Sound of Footloose: The Not Musical.”  I’ve written musicals before and I was excited by the idea of taking a musical and removing all of the singing.  For whatever reason, I decided I needed to do a mashup of “The Sound of Music” and “Footloose.”  I’m not sure if it worked yet but the results are pretty silly.

I’m also producing a regular live radio show called Big Fun Radio Funtime at the Bryant Lake Bowl.  I’ve been having a ton of fun with that show and later this year, we are going to produce a horror version for the Twin Cities Horror Festival called Big Spooky Radio Spookytime.  I don’t know the performance dates yet but I’m really looking forward to that one.

I’m also the artistic director for Fearless Comedy Productions and we are working on a lot of great original comedy over the next 12 months.  I’ll be writing an original show to be produced in early 2016.  I don’t know what it’s about yet but I’m certain that it will have geek appeal.

One of your big projects is “The Vermin Show” with Gordon Smuder of the Puppet Forge. How did you get involved with them?

Gordon and I have known each other for a long time. He was producing Transylvania Television for quite some time and near the end of that show, he brought me on as a writer for some of their live webcasts.

When they decided to shutter TVTV, Gordon told me about this new series he was thinking about and asked me if I’d be interested in being head writer for the project.  Honestly, he had me at “puppet rats.”  Then he mentioned Trace Beaulieu and I knew I couldn’t turn him down. 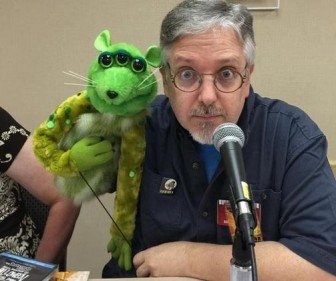 What do you see as one of the big long-term goals with “The Vermin Show”?

Right now, we are trying to get things funded via Kickstarter.  That’s the first big hurdle.  If we can get the money to proceed, we have three seven episode seasons all mapped out.  There are a lot of things going on in the show that are only hinted at in season one.  What’s with all the bagels?  Why is there a door only our hero rat can see?  Why do they keep moving the cheese?  And where did the ninja come from?

All of those questions will be answered as we progress.  It’s an epic story, I think, but it is grounded in a comparatively simple workplace comedy about rats who are just trying to do their job.

Who are some of the great writers who inspired you?

David Mamet was an early influence on my writing.  Not just the swearing (although I do a lot of that).  He has a rapid fire quality to his dialogue I find appealing and I often try to emulate.

Mel Brooks is also a great source of comic influence.  Especially his greatest works like “Young Frankenstein” and “Blazing Saddles.”  Much of what I write is parody and Brooks’ best work is a great example of getting a broad audience to connect with source material they may not immediately understand.  You don’t need to be a fan of the Universal monster movies to love “Young Frankenstein” but if you are, you will enjoy them on a whole different level.

More personally, I draw inspiration from my good friend Joseph Scrimshaw.  We both write geek comedy and while our writing style is very different, I just enjoy the hell out of his work and find his continued success an inspiration.

We often hear about how artists get started, but what keeps you going? What’s keeping it fresh and exciting for you these days?

As a comedy writing, nothing is more rewarding than watching an audience laugh at your work.  When I write a play, I genuinely don’t really know if it is funny until I put it in front of an audience.  When they laugh, I feel validated.

Writing comedy can be scary.  You don’t know if you’ve succeeded because while you may think what you wrote is funny, you have no idea if anyone else will think it’s funny.  When they laugh at your work, though, there is no other feeling like it.

What’s the most unexpected skill that has come in handy for you as an artist?

No, really.  I find it a lot easier to get work done in the morning than I do in the afternoon.  Waking up early in the morning is one of the best ways for me to get my work done.

Minnesota seems to bring out a really strong, inclusive sense of community among fans and creators of science fiction and fantasy. What were some of the important things that helped to grow this community over the years?

We have a great network of fan groups and conventions.  For a long time, Minicon was the only convention in town.  Just over fifteen years ago, a disagreement in that community gave rise to CONvergence and MarsCon .  Other conventions like Console Room and Anime Detour have also popped up.

This rich network of conventions has really created tons of opportunities for fans to gather and celebrate their shared love of genre fiction in all of it’s forms.

As one of the people who helped form CONvergence, I really think it has helped serve as a crucible for other conventions.  Many of the newer conventions have been inspired by the success of CONvergence and a lot of the folks organizing the new conventions were attending our convention before they decided to start their own.

If Minicon hadn’t inspired the community to fracture into multiple convention experiences, I’m not sure if the rich diversity that is the current Minnesota fan community would be as pronounced.

If you could make Trace Beaulieu take you ANYWHERE for lunch in Minnesota, where would it be?

Maverick’s.  It’s a little restaurant in Roseville that serves the most amazing roast beef sandwiches.  It’s kind of like Arby’s except the food is amazing.