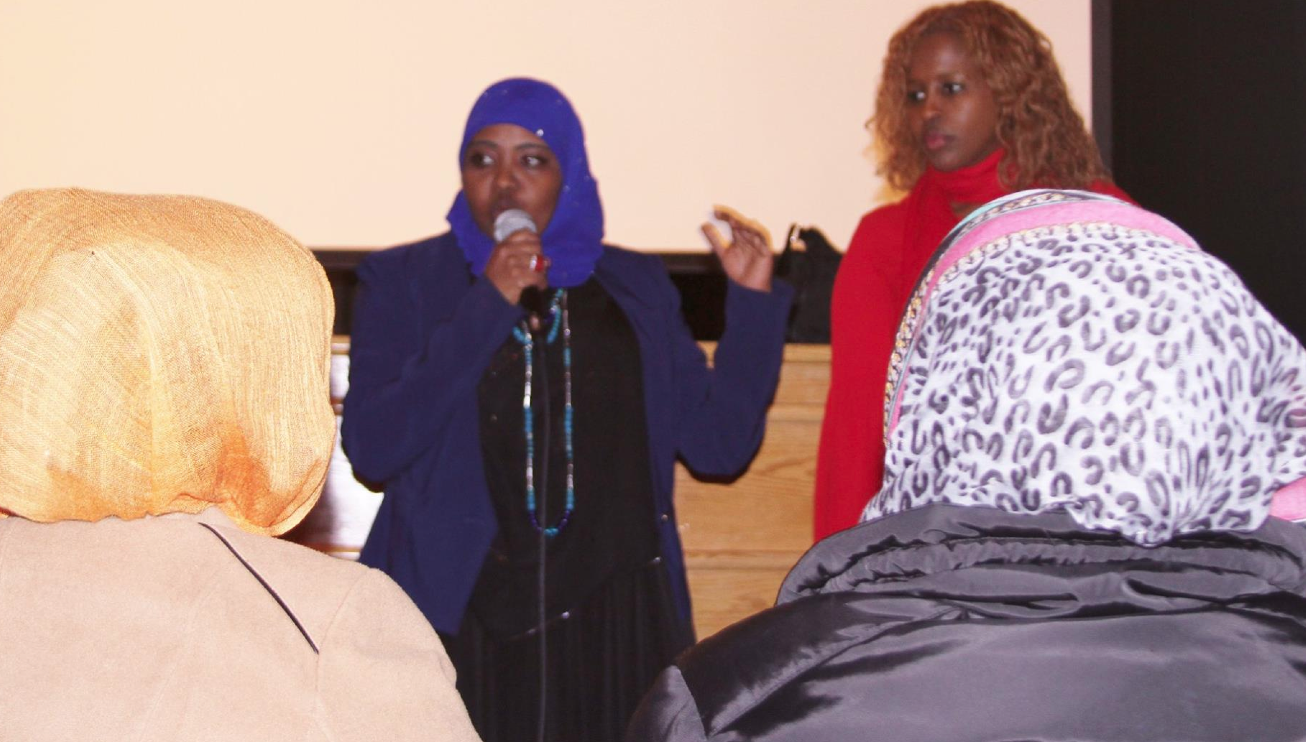 This past Thursday, around three-dozen Somali community members gathered in the auditorium of the Sabathani Community Center in South Minneapolis to engage with the Hennepin County Sheriff. Organized by the nonprofit group Voice of East African Women (VEAW), the town hall-style meeting included mothers, fathers, elders, and even a few young people.

“I do know there’s so much going on in the community [with] the youth and violence, extremists, and all this hype going on in media,” says Farhio Khalif, Founder and Executive Director of VEAW. Just a few weeks ago, in fact, the White House held their Summit on Countering Violent Extremism (CVE). Several Somali community members and officials attended, including Hennepin County Sheriff Richard Stanek. But, Khalif says, “My focus was not mainly CVE. It was about the Hennepin County Sheriff: what work they do, how can mothers learn more about their programs, and basically just introducing the sheriff to the mothers’ roundtable.”

This roundtable was part of a monthly series VEAW hosts with their Circle of Mothers to discuss issues affecting the community. VEAW focuses primarily on domestic abuse, violence against women, and sex trafficking. Khalif says the impetus for this month’s meeting topic came when multiple mothers had called her asking about what their children would go through while in jail. So she decided to reach out to Abdi Mohamed, the Hennepin County Community Outreach Liaison for the Somali community. He helped liaise Thursday’s meeting.

Mohamed says the purpose of the roundtable was education. “The community are new, some of them. Some come from another country where law enforcement are different [from] here.”

During the meeting, Sheriff Stanek talked about the function of his office but also mentioned his recent trip to the White House. Addressing the audience, he said, “I advocate on your behalf all the time. I had a chance to talk to the President of the United States and talk about countering violent extremism–to talk to him about the young men and young women in our community who have for whatever reason traveled back overseas and/or do things here. And our job is to help identify them, but local enforcement can’t do it alone. I need your help to be able to do that.”

Stanek had to leave soon after his presentation and was unable to be reached by phone the following day; however, following his talk and an accompanying informational video, community members did have the opportunity to ask some questions. One elder asked about how probation works and whether parents can visit their children in jail; others raised concerns about the treatment of those with mental illness in the criminal justice system; while yet others asked about general judicial procedure.

Additionally, says Khalif, “We are a country where African Americans have been here over 400 years, and nothing changed…You turn on the TV and all you see is black man is being killed, nothing can be done. So we as the Somali community are really looking at that, and we really have a lot of questions.”

Roundtable attendees also had many questions for the FBI community outreach representative who had been invited. While she was unable to talk to media, her colleague Greg Boosalis explained the next day by phone that Thursday’s event was a continuation of their efforts to open lines of communication with the Somali community, among others. He said the sheriff’s office and FBI “work very closely to share information,” and that, “We share a common interest, obviously, that we don’t want our vulnerable youth traveling overseas to join ISIS or any other group of that nature.”

The Sheriff’s office hopes to continue building what they call “communities of trust,” which they say would also help reduce crime. Whether these initiatives work in the long run while also avoiding possible ramifications of stigmatizing Somali communities in the Twin Cities, remains to be seen. But since beginning work in the sheriff’s office in 2010, Mohamed reports that their outreach and education efforts are working well. “The community [is] calling us, reaching us.”