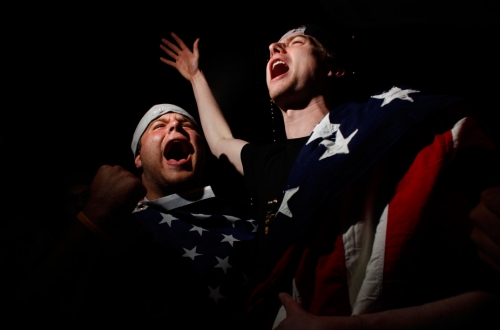 In his masterpiece, Crowds and Power, Elias Canetti proposed that one of our primal fears is of unwanted contact with strangers. Out in public places, he observed, to be touch, jostled, even brushed against, can trigger something akin to panic.

In an increasingly urbanized world such a phobia could be paralyzing (and for some people, is) absent the psychic mechanism Canetti also proposed that we possess and that compensates for this primal fear by allowing our sense of individual identity to dissolve, merging with the strangers around us in a collective persona.

In our own history there are numerous examples of this destructive kind of crowd formation. Between 1890 and 1920, lynch mobs were responsible for murdering some 3,000 people – and those are only the cases that we know about. The New York City Draft Riots of 1863 lasted three days, resulted in the deaths of numerous innocent victims, and were only quelled when federal troops were commandeered from the front to restore order.

For most of history, mobs have formed spontaneously, dissipating their energy once they have achieved their immediate end of destroying property and/or harming or killing human beings, then disbanding as quickly as they form.

But one of the most sobering lessons of the 20th Century is the discovery that, under the right circumstances – the rise of skillful demagogues, the control of the organs of mass media by those demagogues – it’s possible to generate a sustained mob mentality, and to direct its demonic energy toward specific, hellish goals.

Political science offers numerous definitions of fascism, but none strike us as definitive. That’s because fascism is not simply a political ideology like Soviet-style Communism; that is to say, fascism is not just the product of reason gone awry.

Fascism is, essentially, the modern nation state as mob rule, with a national mob mentality constantly stirred up by the state with inflammatory rhetorical attacks directed against  scapegoats – Jews, Blacks, immigrants, homosexuals, socialists, Muslims or whichever other group happens to bears the brand of The Other in a given culture.

Fascism’s intentional harnessing of the defense mechanism that drives the formation of crowds explains fascism’s allure, at least to some, which is the opportunity to unburden one’s isolated, individual sense of self by identifying completely with the exhilarating collective energy of the “Volk.” It is this dynamic that renders fascism, by whatever name, irredeemably irrational and  destructive.

Thus institutionalized, and married to the apparatus, organizational power and armed might of the modern nation state, the mob energy harnessed by fascist regimes in the last century came very close to destroying the civilized world as we know it and could only be stopped by massive organized violence inflicted upon those regimes by other advanced nation states.

This critical mob mentality component of fascism also explains why countries do not “slide” into fascism, as some warn is happening in the United States; mobs do not form slowly. They gel, they materialize, they appear instantaneously, almost magically, with little or no forewarning.

In his speech this past week to military personnel, Barack Obama announced that the targeted assassination of Osama bin Laden reflected “The essence of America, the values that have defined us for more than 200 years” and that, furthermore, these values are “stronger than ever.”

He was dead right, though not in the way he intended.  The manner in which bin Laden’s death was carried out reflects at least one face of American values as did, even more dramatically, the deprave celebrating that erupted in the wake of his killing in cities and on college campuses around the country.

From the extrajudicial execution of a dehumanized enemy to the choice of “Geronimo” as code name for Osama bin Laden to those outbursts of jubilation, the killing of The World’s Most Wanted Man does indeed connect to those American values responsible for the country’s history of violent racism, imperialism, repression, militarism, and near-genocide of the indians.

And those post-assassination victory celebrations were not analagous at all to the outpouring of relief and joy that accompanied the end of World War II. Bin Laden’s extermination did not spare millions of Americans from the prospect of going off to fight in a global war or from the equally harrowing prospect of watching one’s child, husband or brother being marched to the front.

The killing of OBL ended nothing, except his life. The celebrations were not about victory. They were about death. They were celebrations of death. Those dancing in the street were acting out their own version of the motto of the Falange – i.e., fascist — movement during the Spanish Civil War. “Viva la Muerte.”

The time is not yet ripe for the clock to strike Midnight in America, but it won’t take much to push us over the edge. Another major terrorist attack on the “Homeland.” Another financial crisis on the scale of the most recent one, which could easily be triggered by the failure to raise the federal debt ceiling.  The appearance on the scene of a skillful demagogue with the organizational ability to marshal a mass movement and an unslakable thirst for politcal power.

Even now, egged on by the rightwing demagogues already among us and bankrolled by  rightwing billionaires plotting in undisclosed locations, the American mob longs to shake its collective fist and cry out for vengeance and blood in a hoarse collective voice.

Long live Death! And long live the Death of Democracy!