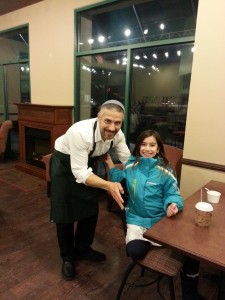 Kosher diners in the Twin Cities now have another option for eating out. Vitali’s Bistro opened yesterday, and if their homemade muffins and scones are any indication, it should be a hot spot for all eaters, not just those that keep kosher. Conveniently located on Minnetonka Boulevard at Highway 100 — a stone’s throw away from most of the Orthodox synagogues in the area — the bistro will be a kosher vegetarian restaurant, focusing mainly on lunch and dinner items.

Before we go any further, let’s get one thing clear: this is not a deli. Andrew Zimmern, don’t get your hopes up. This is a bistro; you won’t find a bustling counter or a meat slicer on view in back. You will see modest decor, including a chalkboard menu, and lots of smiling diners. They’ll have the usual assortment of coffee drinks, baked goods, soups, salads and sandwiches; plus some fancier options like sushi, crepes, and blintzes.

What I like about Vitali’s Bistro is that, in keeping with traditional Jewish values, it doesn’t try to be bigger than it is. Owner Vitali Logman seems to know his customer base and seems intent on serving them well. Yes, the place is still a work in progress, so some of this might change, but the inside doesn’t have fancy decorations or specialized lighting, and the outside doesn’t even say “Vitali’s Bistro.” The awning above the restaurant just says “Coffee,” left over from the previous occupants. There will be a chalkboard menu eventually, but even that wasn’t ready to go by opening day. It all seems like Vitali was in such a hurry to get his dream of running a restaurant started, that he opened his doors as soon as the building permits cleared.

“I just always wanted to start my own business and work with the customers,” says Vitali. “I wanted to have a place where they can feel at home.”

He’s already well on his way to achieving that vision. I showed up not even an hour after they opened, hoping to get some lunch, and close to a dozen customers were already inside. Unfortunately they didn’t have their full menu available, but what they did have was delicious. Homemade muffins and scones were on the counter, and I grabbed one of each. The scone tasted like blueberry pie; and the muffin, still warm, had a wonderful hint of clove baked inside. They had some store-bought bagels and an assortment of bottled drinks that I passed on. I did get a cup of coffee and some ice cream. The guy behind the counter sold me on the “mystery flavor” ice cream, which he was pretty sure was vanilla, he just hadn’t tried it yet so he couldn’t be sure! Turns out it was vanilla. The drip coffee was nothing special, but that’s not hard to fix.

The bistro definitely caters to the Orthodox community; it felt a little like the corner café down the street from the yeshiva. But I don’t think Vitali has too much to worry about as long as the rest of the food is as good as the muffins and scones. There are still some kinks to work out, like getting their full menu not only written but available to eat. They also didn’t have their credit card machine working, or any coins in the cash drawer to make change. But they offered to give me the food for free if I didn’t have any cash; and a $3.50 bill would magically become $3.00 if I didn’t have change.

In all I enjoyed my first visit to Vitali’s Bistro. Not being a kosher diner myself, I can only pass along what I’ve heard from other such diners that there are too few options for kosher dining in the Twin Cities, and everyone in that circle is hoping for Vitali’s Bistro to be a success. Before I left, I asked Vitali what his specialty was going to be, and without hesitation he said the crepes. I’ll have to go back for those.

Vitali’s Bistro is located at 5101 Minnetonka Boulevard in St. Louis Park, just east of Highway 100. It will offer coffee, ice cream, and a full vegetarian kosher menu. It is certified kosher under the supervision of Rabbi Shimon Perez. Presumably closed on Shabbat, more hours will be forthcoming. It doesn’t seem like they have a website yet.