There is something known as “Indian humor,” and Jim Denomie’s paintings evoke it with gusto. Variously wry, blatant, ironic, subversive, harmless or even obvious, Indian humor, in general, makes evident what is right and wrong with the world and presents new perspectives on received notions. More specifically, it prompts one to take a hard look at the inner and outer self, and it often clarifies the spiritual in Native culture itself. In Recent History, his current exhibition of oil-on-canvas paintings, Denomie does not miss a beat, continuing the hyper pace he’s set over the last few years with shows at Ancient Traders Gallery, the Minneapolis Institute of Arts, and now the Bockley Gallery—where Recent History is on display through October 10.

Still with us (thankfully) are Denomie’s motley cast of characters—war chiefs, magic rabbits, spirited horses, nudes, portraits, and his eviscerating history paintings—all done up in aggressive strokes of rainbow color. Not for the timid or the discreet, Denomie’s paintings recall hallucinogenic experiences as if possessed by a powerful way of seeing, oddly a contemporary heir to the haunting surfaces of Van Gogh paintings such as the dizzying Starry Night.

An Ojibwe born on Lac Courte Oreille reservation in Wisconsin, Denomie often anthropomorphizes his animals, imbuing them with a dual existence. In a series of three portraits, Magic Rabbit I, II, III, a rabbit with alert antennae-like ears and wearing a blue spotted vest peers out knowingly at the viewer. The vest, in fact, is Denomie’s making the rabbit a sort of alter ego of the artist.

Denomie’s visceral style animates war chiefs in headdress, horses, and couples. Defined by unruly exaggerated mouths, large teeth, and ringed eyes almost to the point of grotesque, Denomie undercuts any notions of noble Indian war chiefs or romantic couples. His figures, often nude, stare out with such vengeance that one at first wants to look away. Are they laughing at us? Chiding us? 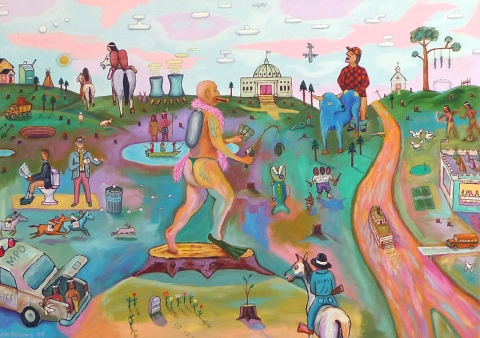 Leaving no prisoners is Denomie’s large revisionist landscape painting titled Casino Sunrise. Shifting from bold brushstrokes to a less inflected surface created in an almost naïve, simplified style, Casino Sunrise is Denomie’s personal revision of Minnesota’s State Seal. Governor Pawlenty stands behind a blue ox (Pawl Bunyan) with his pants around his ankles, and a nearly nude cigar-smoking Governor Ventura wears a pink boa, clenching a fishing rod set with a grenade in one hand and a fist full of money in the other. Former senator Coleman sits on the toilet while Franken counts ballots behind him. Senator Wellstone’s plane is about to crash. The lynching of three Indians in Duluth, Ft. Snelling with teepees on its roof, two Indians in a Minneapolis Police Department squad car, a Christian church, and an Indian funeral pyre are all there. Naked tree stumps mark the landscape, while the domed State Capital building and nuclear reactors rise up in the distance. “The Minnesota State seal needed to be updated. It’s been a while,” says Denomie. “This is all history, all of it is history of Minnesota.”

In Split Decision, Paul Wellstone stands between Norm Coleman and Al Franken in a boxing ring. The recount has gone on so long the arena is nearly empty. A rabbit, moose, and wolf sit upright in the front row, a warrior straddles a white horse whose forelegs are draped over the seat in front of them, and an owl perches on the ring’s corner pole. Franken raises his gloved left hand in victory but no enthusiasm in the crowd is detected. “I started painting this before the decision,” says Denomie.

Denomie and I first met in 1990 when he was working, primarily, as a black and white photographer, and I was a curator at Intermedia Arts and director of Two Rivers Gallery at the Minneapolis American Indian Center. Moving from photography to paint, his subsequent narrative landscapes were colorful, mystical concoctions that explored native culture with irony and humor; but the work lacked the passion and intensity inhabiting his most recent work. Denomie has found his voice and evolved into a bold colorist, revisionist historian, adept storyteller, and a fearless sociopolitical commentator. He is a versatile artist whose work—like cautionary tales—reminds us of our past, keeps us honest in the present, and makes us think about the future, all bookended by a sharp eye and that wry, edgy Indian humor.