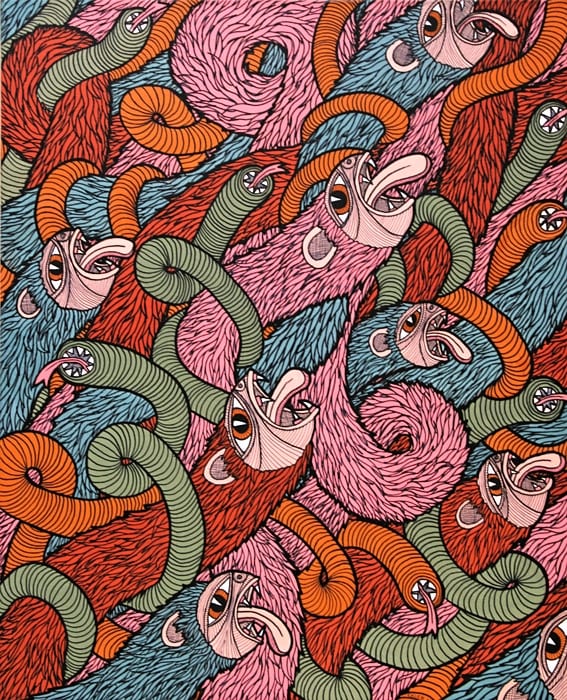 Work by Chuck U that will be seen in Robozoology. Images courtesy Nicademus Art and Framing.

Local painter, illustrator, and graphic designer Chuck Ungemach has been scribbling his unique brand of doodles for years now. He’s known around town for designing concert posters and album art for work from Muja Messiah’s Grand-Theft-Auto-inspired Thee Adventures of a B Boy D Boy to Dance Band’s Geekadelic; contributing artwork to the Star Tribune, Vita.mn, and Rift Magazine; and creating the logo for the late Dinkytowner Cafe.

Ungemach, or “Chuck U” as he’s commonly known, will reveal Robozoology, his first solo art exhibit, with an opening reception at Nicademus Art and Framing on Saturday, January 9 from 6 p.m. to midnight. Robozoology is a wonderful and bizarre land inhabited by animals and by animal-like creatures with robot limbs and wires for body parts. The show will also include past commissions, and will feature live music by Idle Hands as well as highlights from Ungemach’s iPod.

Chuck U creates two and three-point perspective drawings, mixing a palette of pastel and monochromatic hues, and combining paisley patterns, wires, and worm-like tubes with animals and architectural forms. Subterranean Science Club places the worm-like creatures from the Geekadelic album art in a cross-sectioned village of tiny houses, bridges, and underground waterways. The Old Hot Dog Mill uses the cross-sectioned motif to depict a city towering over an assembly line running down to a waterway filled with furry water monsters, a work reminiscent of the Minneapolis flourmills.

Robot limbs, furry worm-like creatures, and turquoise tubular forms looking like sea plants comprise Muppets Seppuku, a work the artist thought looked like what would happen if one were to use the Japanese ritual suicide of disembowelment on one of Jim Henson’s creations. The title is always the finishing touch on any of Ungemach’s pieces. 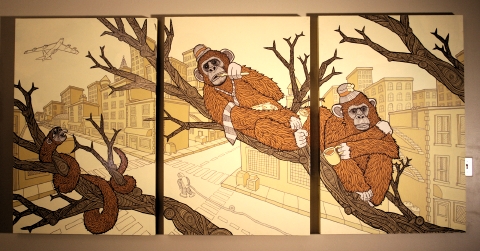 A cohesive whole appears to form from the chaos in Chuck U’s prints and paintings. But the artist insists any meaning is subjective, as he hides no symbolic meaning in his work. “There’s not really any underlying theme,” says Ungemach. “It’s just stuff I think looks cool. I like drawing animals and monkeys and robots, and, you know, things that I think are awesome.”

Robozoology will include about 20 posters and 10-15 paintings. Only one of the paintings, a three-paneled work titled Monkeys Are the New People, will be sold as a print. For print buyers, Nicademus will be framing posters, and will have a sale on frames during the opening.

Chuck U aims to keep his work accessible. “I like being able to charge 20 bucks for a print,” says Ungemach. “Most of the prints are gonna be around 25 bucks, give or take.  I like having stuff everyone can afford.”