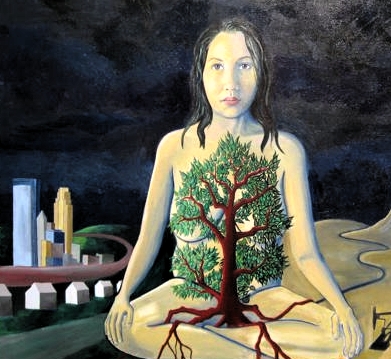 Ever look in the mirror and ask yourself what you really see? Not the wrinkles, wimpy hair, or oversized nose, but what do you really see? Good times? Bad times? What could have been? Would your self-portrait be a physical likeness or a personal story? In Hokah! Ten Years of Art you get both—but mostly the latter. In celebration of its tenth anniversary, the Ancient Traders Gallery is hosting a group self-portrait show that features more than two dozen works by more than 20 American Indian artists who either reside in the Twin Cities area or have close ties to the area. The show will be on display through January 30.

Guest curator and artist Carolyn L. Anderson organized Hokah!, originally the brainstorm of painters Jim Denomie and Carl Gawboy. All three have works in the show. Paintings and drawings make up the majority of work on view, but works in other media include a striking minimalist beadwork piece, Limón Self-Portrait, incorporating a turtle motif, by Doug Limón and a small quilt by Gwen Westerman. Emily Johnson is represented by video, and there are photo-based works by Joe Allen and Mona Smith. Kevin Pourier depicts himself in a sculpture carved from a buffalo horn, Mixed Blood Guy II, that explores his Native and non-Native cultural heritage.

Pourier is not the only artist to explore his/her identity. In a conceptual mixed-media piece titled Not, Dyani Reynolds-Whitehawk (who is a student at the University of Wisconsin—Madison) explores her Lakota, German, and Welsh heritage using rawhide, sinew, ink and written text. In Self-Portrait Between Mni Sota & Dinétah, Anderson paints herself sitting cross-legged and naked with a tree branching across her body, à la Frida Kahlo. To her right is the Minneapolis skyline and to her left is a southwestern butte landscape with an old-style hogan.

Other works are more political and address the fractured and often terrible Indian history following European settlement. Using digital photography, Smith’s Between focuses on the upcoming 150-year anniversary of the 1862 Dakota Indian wars using text that says “between a rock and a hard place” and “2012.” In her watercolor Mrs. Badgun, Lisa Fifield tells the story of a Gros Ventre woman who was imprisoned for killing three men with a shotgun, but later released. Fifield painted this from a photograph that once hung on her grandmother’s wall, but traded prison garb for traditional hide dress. 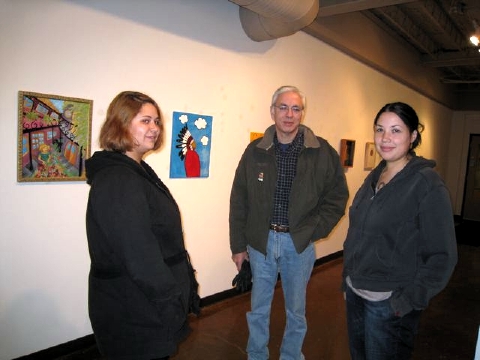 Gawboy and David Bradley both address the stages of life: youth, middle age, and old age. Gawboy, who was born in Ely and is part Ojibwe and part Finn, paints three figures paddling in a birch bark canoe on a Northern Minnesota lake. Bradley, who was born in Minnesota but resides in Santa Fe, realistically paints his visage three times, vertically stacked like Matryoshka (Russian nesting dolls), with the top one a skull. Unfolding behind is a split landscape of pictorial elements that reference both Minnesota and the Southwest.

Star Wallowing Bull’s Starman #2 is a stylized elegant work on paper that suggests Streamline Art Deco works of the 1930s. A figure so stylized as to be a hood ornament for a Bugatti leaps across the surface, hair streaming as if a wing with a big blue star on his chest. Also of note is Julie Buffalohead’s The Half Bred Supper, where she dons her alter-ego coyote role. Wearing a white slip of a dress and her coyote mask, Buffalohead sits on a table, fork in hand, about ready to eat a mouse on a plate. On one chair a raccoon wrapped in an Indian blanket grabs a fish off of a plate, and a sweatered white bunny licks a cherry Popsicle. 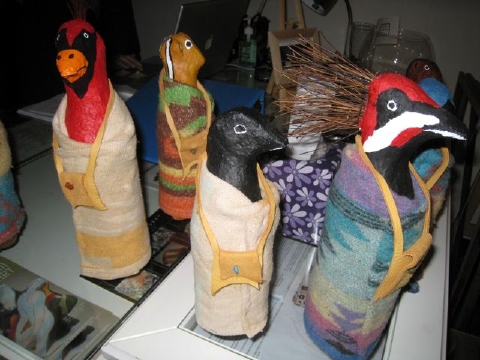 Many works in the exhibit are for sale and, in addition to his small stylized painting titled G, Gordon Coons has made wonderful small animal figures—woodpecker, chipmunk, bear, crow, etc.—from weighted bottles. Bearing colorful, painted papier-mâché heads, the figures are wrapped in Indian blanket remnants and each carries a parfleche. Moreover, they are affordable—just right for holiday presents.

While Hokah! (loosely translated as “let’s go for it”; hokahey was a battle cry used by the Lakota that has wrongly been translated as “a good day to die”) features many important artists, there are a few notable omissions such as Frank Big Bear, Ernie Whiteman, and Behon La Prairie. For anyone interested in contemporary American Indian art, or wants to learn about it, Hokah! is not to be missed.