Alec Soth, internationally recognized Magnum photographer and Twin Cities native, was a featured speaker and Gary Hallman, a revered professor of photography at the University of Minnesota for 38 years and a noted photographer in his own right, was the Honored Educator. Established in 1963 by such photo luminaries as Nathan Lyons and John Szarkowski, SPE is a non-profit national organization dedicated to the education and critical understanding of the medium in its myriad of forms.

Anyone connected with the local art scene knows that the Twin Cities has a long and impressive track record in photography, perhaps beginning with Gordon Parks (1912-2006). Parks worked in the late 1930s as a fashion photographer for Frank Murphy, the legendary St. Paul women’s clothing store. Seven decades later, our deep-rooted photo culture continues to thrive and a selective overview of locally based talent is featured in the exhibition The Minnesota Eye: Contemporary Photography on view through November 14 at the College of Visual Arts. 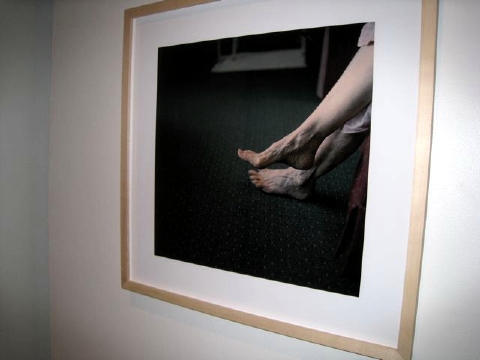 A solid but incomplete “who’s who” of the local scene, the handsomely installed show features one work each by 17 Twin Cities-based photographers including Soth and Hallman. Other nationally recognized artists include Tom Arndt, Lynn Geesaman, David Goldes, Stuart Klipper, Paul Shambroom, and JoAnn Verburg. Rounding out the roster are such notables as Cy DeCosse, Beth Dow, Brian Lesterberg, Linda Gammell, John Marshall, Justin Newhall, Cory Prahl, Carrie Elizabeth Thompson, Katherine Turczan. While a number of fine photographers, both seasoned and emerging were not included, most noticeably Angela Strassheim (who currently resides in New York) and James Henkel, there is only so much wall space. Nevertheless a boisterous crowd of local and out-of-town photo mavens packed the space for a Halloween night opening. 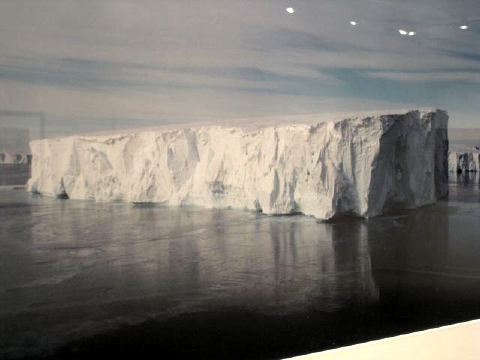 Minnesota Eye could be a primer for contemporary photography of the past three decades, featuring a range of genre, materials and processes. Tending toward a conservative more than a rule-breaking thesis, Minnesota Eye includes portraits, landscapes, still lifes and quasi-documentary images.

For example, Hallman’s more experimental pigmented ink-jet print of collaged landscape images, Tapestry #29, Topanga Canyon is as visually disorienting as Klipper’s image of an Antarctica iceberg, Tabular ‘bergs in nilas ice, Amundsen Sea off Bear Peninsula…, is stunningly documentary straight. Geesaman’s chromogenic print, Parc de Sceaux, France is a dreamy landscape made all the more so by her use of other worldly color. Countering the power of color is Justin Newhall’s pigmented ink print, Whiteout (#2) in all of its white monochromatic minimalism, a blinding reminder that the trials of winter are almost upon us.

John Marshall’s Young Woman, UV set inks on lacquered cherry veneer MDF, at least cracks the show’s more conservative mold. It is a curious, unexpected image. A foreshortened portrait of sorts of a reclining young female, the mysterious image casts a memorable, wistful Pre-Raphaelite spell. Conversely, Katherine Turczan’s gelatin silver print, Okasana Botivina, Journalist, and Ana Olhovik, Student, is drop-dead direct, an emotionally restrained study of two women—a Turczan classic. Arndt’s Catholic Priests at Dinner is arresting, a seemingly voyeuristic but poetic study in black and white of clergy at a table with wine glasses and background interference. Beth Dow creates a haunting narrative by profiling a roller coaster behind a classical colonnade in her atmospheric platinum-palladium print Coaster. Goldes’s From Traces Series gelatin silver print is an elegant tour de force of kitchenware made of wire mesh that challenges our powers of perception. Verburg treats us to one of her newest works, Ledge, from her annual sojourns to Italy. And the list goes on, proving Minnesota a vital home for photographers.