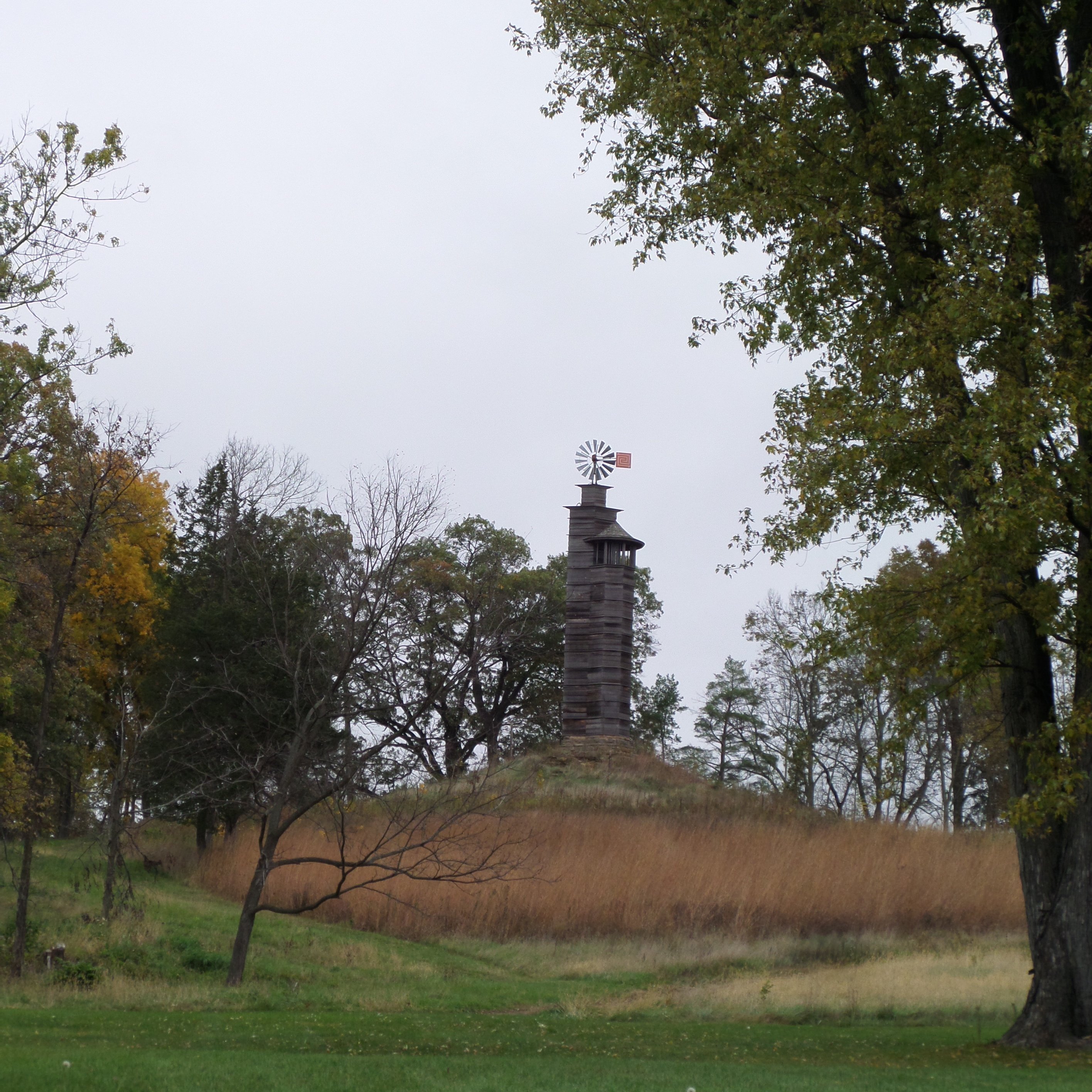 As usual, I was lolly-gagging a bit behind the rest of the group as we toured Frank Lloyd Wright’s Taliesin East near Spring Green WI on October 16.

Like the rest of my species, picture-takers, whether rank amateur (me) or professional, we tend to fall behind because we see this or that that would make, we feel, a good picture. Like a photo of those folks in the tour group I was now lagging behind who were looking at something as yet unknown to me.

They seemed to be a good picture: 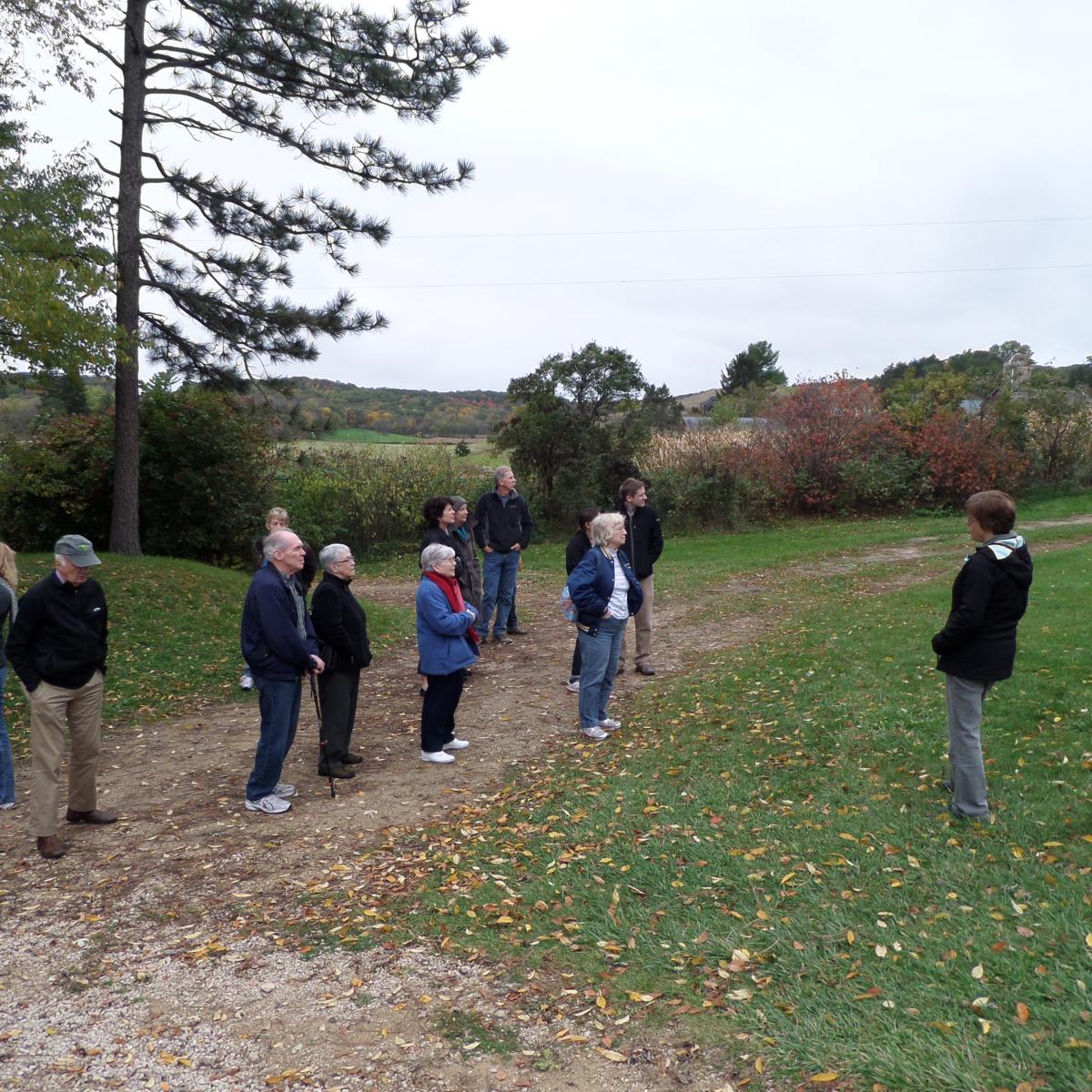 Maybe that’s why they don’t allow indoor photography on tours at Taliesin, which the brochure immodestly (and arguably, accurately) describes as “the greatest single building in America”. Taliesin brochure 2013001

And then I saw what the rest of my group was looking at: the most unusual windmill I had ever seen. 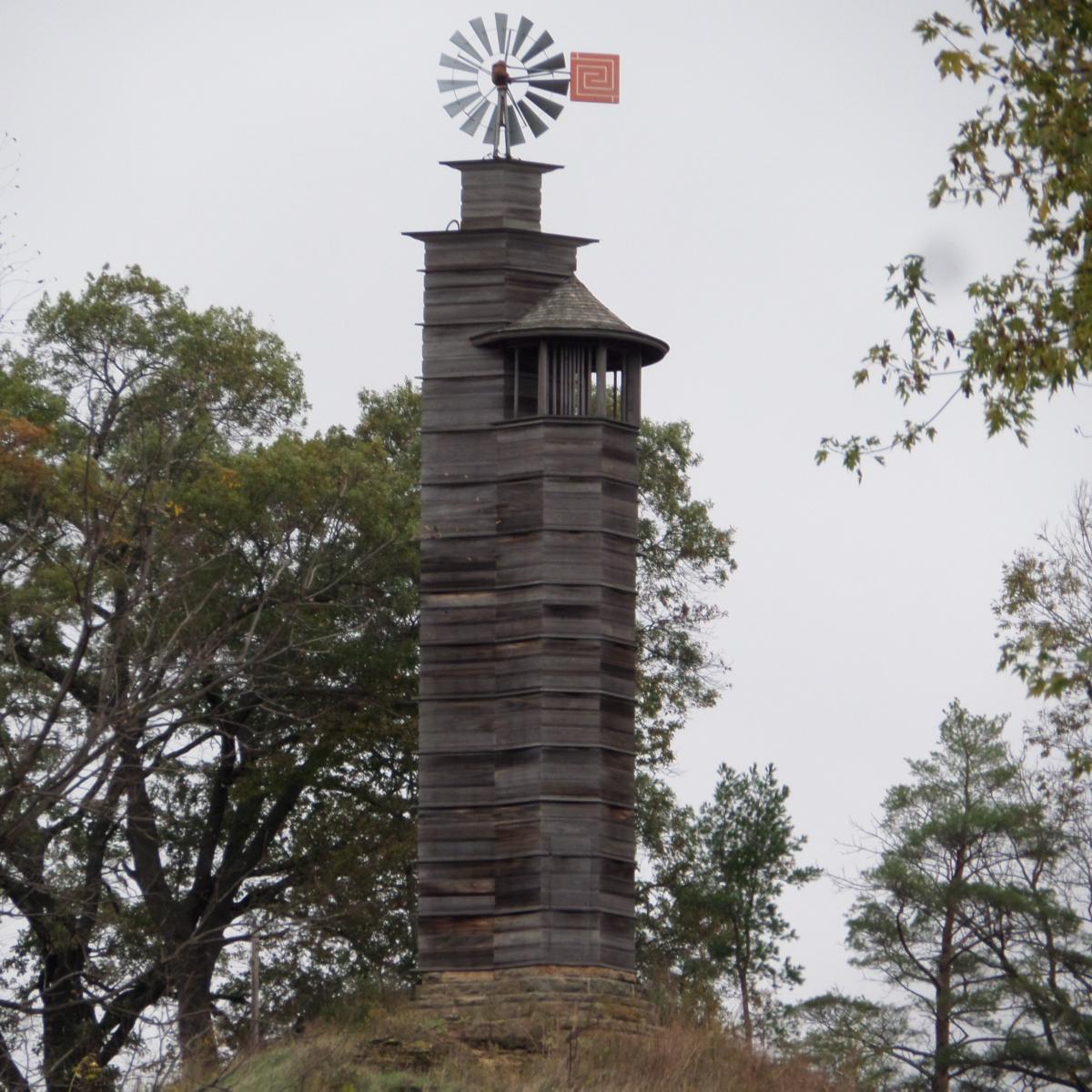 Coming from a rural background, I had plenty of familiarity with farm windmills, but none that looked quite like this one.

Our expert tour guide noted (as I recall) that Wright’s neighbors, way back when he designed this windmill, thought his was a dumb idea. Here this thing was, near the top of a windy hill overlooking the Wisconsin River, enclosed in a wooden structure.

Surely it would blow over.

Apparently the windmill proved everyone wrong: it survived a century. Yes, the original boards rotted away over time, and were replaced, but Wright’s windmill stood on, blended in with its environment. It was much like Wright, perhaps, a bit more classy (and much more quirky and famous or infamous) than its neighbor windmills up and down the roads of rural Wisconsin.
Wright was an obviously greatly gifted guy.

The very word “Taliesin” evokes Wrights philosophy, per the faq’s about Taliesin: “When Wright designed his own home in the valley in 1911, he gave it the Welsh name Taliesin, meaning “shining brow.” Frank Lloyd Wright placed Taliesin on the brow of a hill, leaving the crown, or top, open.”

Wright had his faults (don’t we all?), but I like his apparent philosophy of designs that blended with, rather than dominated, their surrounding environment.

At the gift shop, I almost bought a t-shirt (I didn’t. I already have too many of those, unused), which I thought was pretty neat: 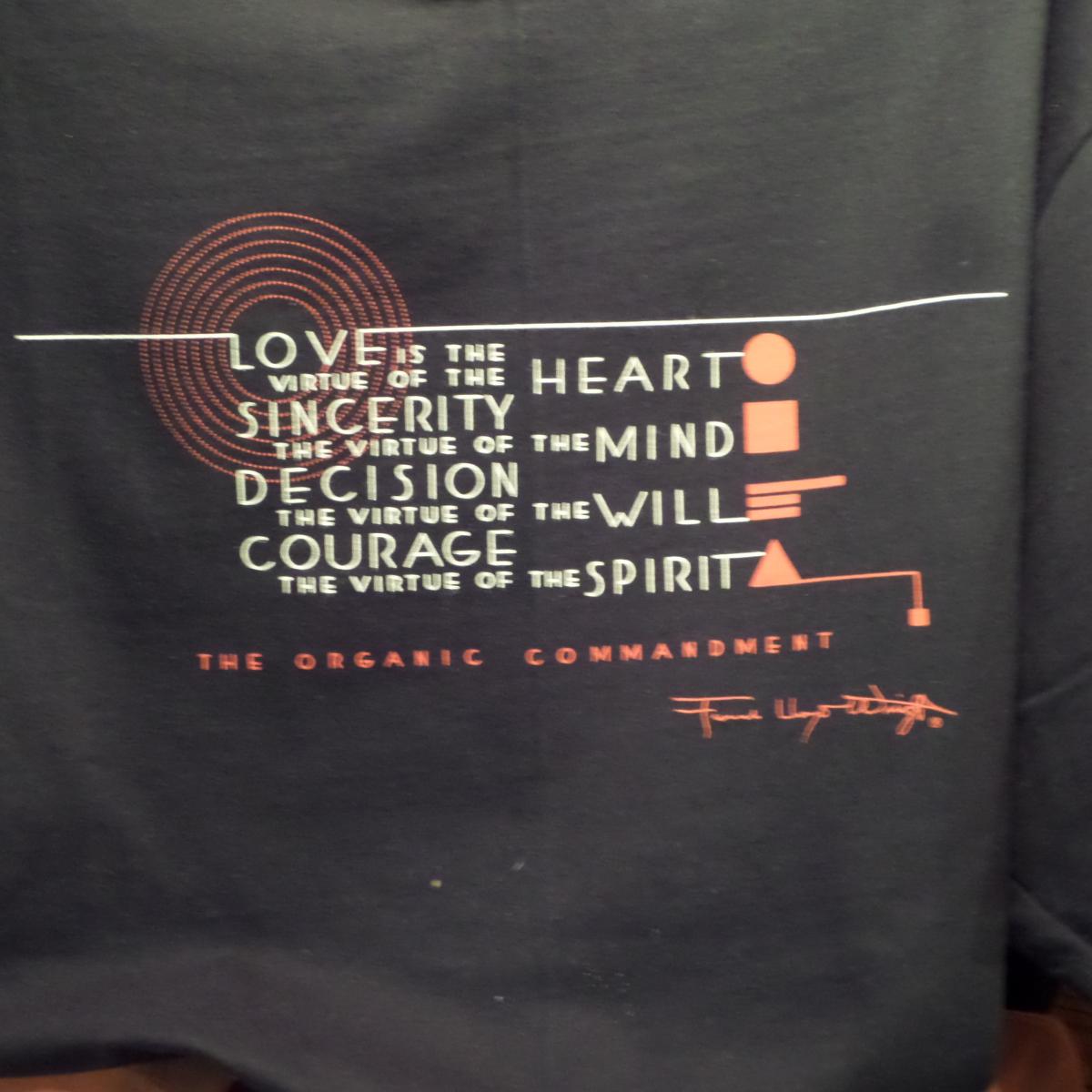 Have a great Christmas and New Year in 2014. 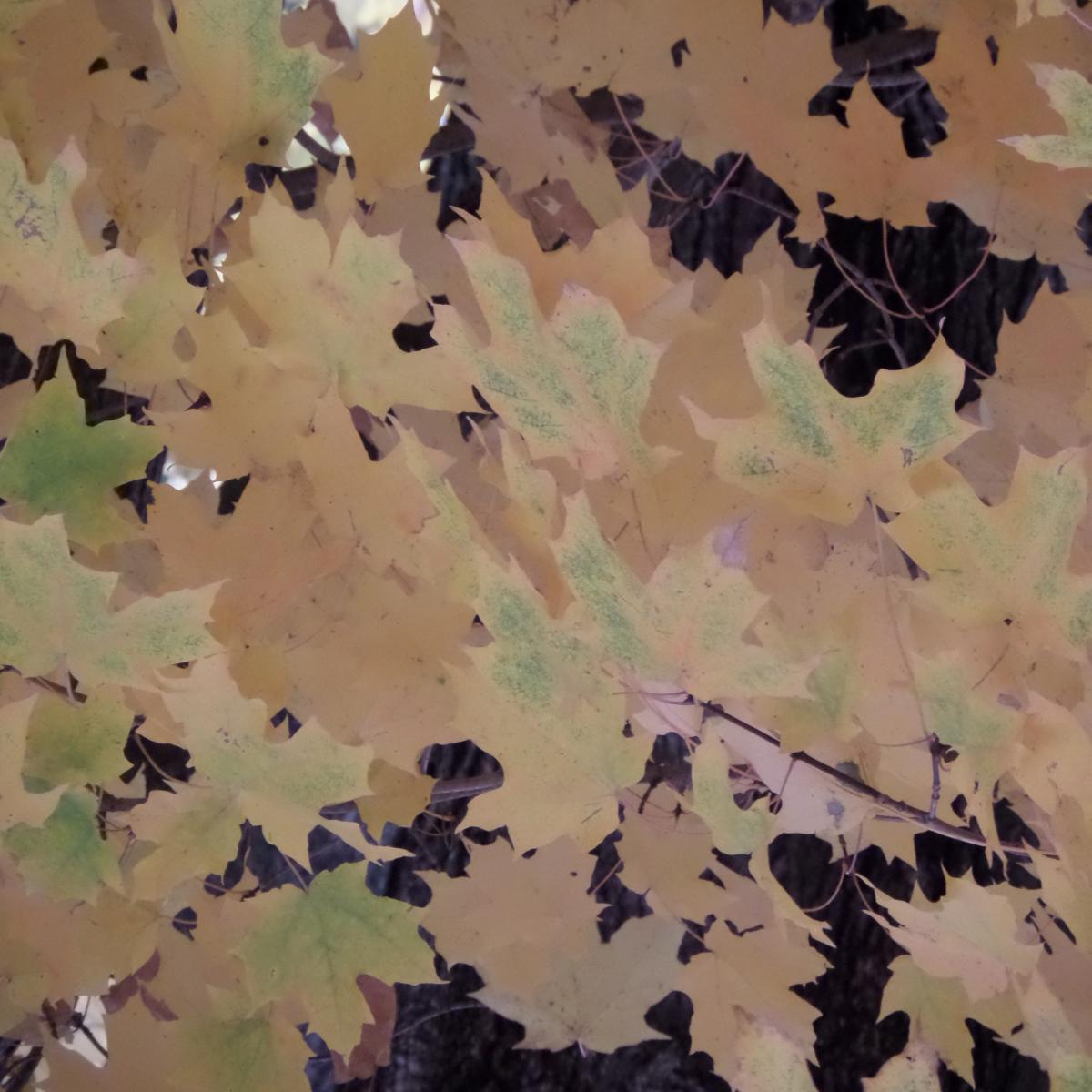 Near the school of architecture at Taliesin, October 16, 2013