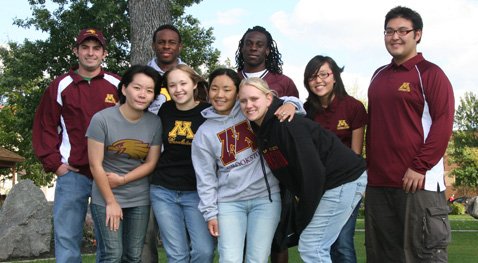 International students at the University of Minnesota.

When Jim Wu graduated with a master’s degree in biochemistry from the University of Minnesota nearly two decades ago as an international student, his new employer helped him obtain a work visa that allowed him to stay in the United States.But because the competition for visas is so high, some of Wu’s international student peers weren’t as fortunate and had to return home.

“Even back then, there was competition. And the legal process is, I would say, hugely depending on the employer’s help,” said Wu, who now works for Target in Minneapolis.

Some U.S. senators, including Amy Klobuchar, D-Minn., hope to ease that competition with a bill that would increase the current cap on H-1B work visas and exclude those with a master’s or higher degree in a STEM field from the current annual green card cap. The Immigration Innovation Act, or the “I-Squared bill,” would raise the annual cap on H-1B visas to between 115,000 and 195,000 — depending on market demand. The current limit is 65,000 per year. The change will make it less risky for employers to invest in international graduate students and integrate more skilled workers into the economy who have been trained in U.S. universities, said Graduate and Professional Student Assembly President Alfonso Sintjago.

GAPSA passed a resolution in January in support of the legislation, and Sintjago said he met with a representative from Klobuchar’s office last week to discuss the bill.

“A large number of [international graduate students] would like to stay and contribute to the U.S. economy,”  Sintjago said.

The bill has also gained the support of the American Council on Education, which wrote in a letter to the measure’s sponsors saying it would help offset a more than 200,000 advanced-degree STEM worker shortfall that the U.S. is projected to face by 2018. Graduating international students seek out H-1B visas because they provide longer opportunities to stay and work in the U.S., said Katie Jabri, a student funding counselor in the University’s International Student and Scholar Services.

“I think a lot of our students will be excited if the H-1Bcap is increased,”  she said.

Additionally, the legislation also proposes to eliminate the current 20,000-person cap on visas for those who have earned advanced degrees from qualified U.S. colleges. International students who graduate from U.S. universities have to compete with other professional workers from abroad within the same visa raffle applicant pool, Sintjago said. “You’re really competing with anyone in the world,” he said.

International students who find work after school can seek aid from their employers, who can sponsor them for an H-1B visa, Jabri said, but getting one is far from a sure bet.

“It’s kind of a guessing game after students graduate how long they will be able to stay, even if they find a great job,”  she said.

Employers face costs for investing in international workers, such as visa paperwork fees, which can make them hesitant to put energy into an employee who they can’t guarantee will be able to stay, Sintjago said. Getting a visa is even more crucial for students who study in fields that lack career opportunities in their home countries because for them, going home isn’t a realistic option, Sintjago said. The bill could also help those students, as it eliminates a visa requirement mandating that international students study in the U.S. with the intention of returning to their country of origin. The legislation would make international students’ overall experience of studying in the U.S. less stressful, Sintjago said.

“We really should help those people,” he said, “and not make it so difficult for people we really invest in [to] stay in America.