I met Sicilian Chef Vincenzo Betulia at the Walker Art Center’s newish restaurant Gather by D’Amico. Gather features a different chef each month, and every Thursday night they have a happy hour and full bar, offering the dishes created by the featured chef. The first Thursday of each month the guest chef’s specialties are offered free for restaurant patrons to taste.

Betulia is the executive chef at Campiello in Naples, Florida. On November 3, I showed up at Gather to sample the menu items that will be on sale through the rest of the month. He made some amazingly rich and fabulous dishes. I have a weakness for scallops, truffle oil, and beef tartare, so I was in heaven. The following dishes were melt-in-your-mouth amazing:

While at Gather, I also got to try the Banh Mi and grilled cheese plate off the menu and a couple of the specialty cocktails (including a delicious eggnoggy drink—perfect for the season) and they held their own as well.

Before putting this tasty food in my mouth, I sat down with Chef Vincenso Betulia and asked him a few questions that my lovely Titter-friends and I wanted to know. He was quite fun to chat with!

Someone told me that you always ask a chef what his or her last meal would be. Do people ask you that? Is that a thing?

I’ve had a lot of those questions. If I had to have my last meal…That’s kind of a daunting question. I am one of simplicity and my food speaks to that but if I had to pick a least meal, it wouldn’t really be a meal, but it’d just be some rustic, crunchy bread, with salumi (you know, portadella or salami), and some beautiful olives and some red wine and that’s it. A little bit of cheese—I’ll throw some cheese in there. I don’t think I can really pinpoint a meal because I love too much.

I was born in Sicily but my parents immigrated to this country when I was two to Milwaukee to find jobs. I lived with them and my grandmother and I was just around food all my life. My grandmother made pastas and pizza doughs, everything from scratch, scratch sauces, scratch fillings. It didn’t really make any sense to me until I was 14 when I got my first restaurant job.

Yeah, so it’s been a while! 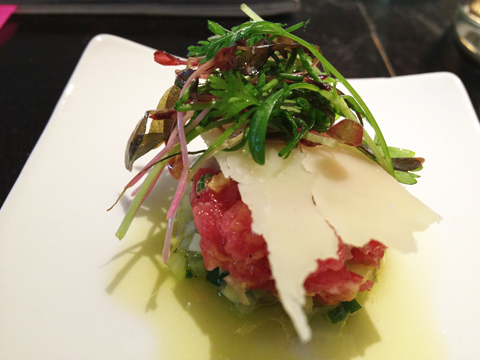 Is Italian your favorite?

Yep. I enjoy eating all sorts of cuisines whether it’s Mexican, or Thai, or French. I really have an appreciation for all cuisines in the world but the only one that I want to cook is Italian. I just have a love affair with Italian cuisine. It’s really simple and it’s based on simplicity. You have a handful of ingredients and you make a great meal out of a couple things. You can’t really hide behind smoke and mirrors and this and that.

I’ve got some in the back. We’re actually featuring truffle—well the essence and the oil—on our scallop dish tonight. It’s going with a brown butter sherry and a truffle vinaigrette.

That sounds delightful. You said you like Thai…Do you eat Thai food in the Twin Cities? This is a personal question because I’m trying to find good Thai food here.

I haven’t. When I eat out in the Twin Cities I try to keep it Italian so I can see what everyone else is doing. It’s more of an experience, not just going out to eat. I can learn from it, I can catch a technique or I can catch something off of dining. That and if I can walk to the restaurant. I typically stay downtown. Whether it’s 112 or La Grassa or of course our restaurants that I eat at almost every day while I’m up here. Last night I ate at Masa and had tacos; it was great. I had a margarita and some tacos.

They have good margaritas. And churros.

I had Churros too! I appreciate other types of cuisines but I don’t want to cook it, I just want to eat it.

Well, I don’t want to cook anything. I just want to eat everything. What’s your favorite vegetable?

What the [bleep] is a cardoon?

It looks like a celery stalk and it tastes like an artichoke. I love vegetables. I love eggplants. Tomatoes, of course–but that’s a fruit, not a vegetable.  It’s those things. Things like artichokes and cardoons.

Where did you do your training? Did you have any mentors? Or did you learn from your family?

I didn’t really realize that I learned so much from my grandmother. My grandmother lived with us and she taught my mother how to cook. My mom comes from central Sicily and the cuisine is very different from where my father’s from—the capital, Polermo, which is mostly a seafood-driven diet. So my grandmother really taught my mom how to cook and I just kind of saw it then I got this job at 14 working at a little salad station at a small little mom and pop restaurant. And then I took another job for a guy named Paul Bartolotta who is my mentor, really, he was the one who really opened up my eyes to Italian food and what it’s really like. Because I think in this country, a lot of people have a misrepresentation of what Italian really is. They think they go to Italy and you get whatever you would see on a commercial, like what you would see at the Olive Garden. I get that a lot in Florida because they just don’t really—they’re like, “Oh, what kind of an Italian restaurant is this? You don’t have veal parmesan on your menu?” Well no because they kind of don’t eat that over there. So they have this Americanized version of what they think Italian food is. But Paul Bartolotta was the chef at Spiaggia in Chicago and after I graduated high school I ended up moving down there and I worked for him. I ended up going to culinary school while I was down there at Kendall, but he was the one who really got my head around real Italian food, and a lot of Central Italian food, Northern Italian food, of course I’m eating Sicilian food all my life so I am already familiar with that and what it is. So he was really my mentor and I worked with him for nearly ten years before I moved to Campiello in Naples and I’ve been there eleven.

I worked with a lot of the chefs within that corporation and they were awesome. It wasn’t just one guy. When you learn to create a style of your own, you’re like well “I like this guys fire and passion” and this other chef—I like how he approaches his staff and is a little bit kinder and doesn’t throw pots at you or something like that. The food of course just kind of comes to me. I can see something and know how to prepare it. I already have a way of how to do it. It’s kind of fun.

I love what I do. I couldn’t do anything else. If I didn’t do this work I don’t know what I’d do? Librarian?

There isn’t anything else you’re good at?

I like feeding people and making them happy. That’s the ultimate goal. And I get to travel. I travel to eat. 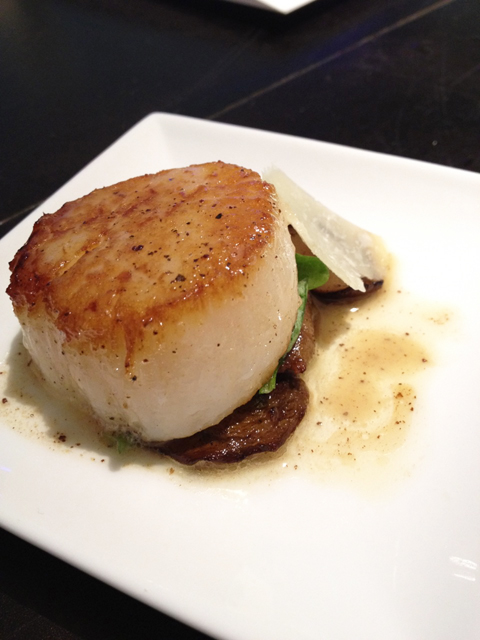 I’m doing two dishes [tonight] and they’re very simple. And they’re northern dishes instead of southern. One is the beef tartare or beef crudo and it’s served with celery and a little bit of pecorino Romano. Again very northern because the Italians eat raw but they typically like things very well done including their vegetables. The northern Italians are a little bit more adventurous when it comes to eating. They can mingle with a lot of different styles, they’re close to France; they’re close to Austria. And you see a lot of the two cuisines blending. Especially in the Borth of Italy when you get into Veneto and Alto-Adige and these regions in the north, you see a more Germanic style in their cuisines in these regions. In Northern Italy they’re eat spaetzle and instead of eating prosciutto they eat speck, which is smoked instead of just a cured ham. On the other side you see a lot more French style like fondue-ing of cheese and a lot more cream-based sauces.  And Piemonte (Piedmont), that’s where this crudo comes from. It’s a wine capital but they definitely are a gastronomic center of Italy. Their cuisine style is simple; it’s contemporary, and a little bit more forward-thinking. So tonight with the beef tartare I’m actually adding pine nuts and white anchovies to it, which is kind of an interesting mix but they use a lot of anchovies in this region. It’s a landlocked region but anchovies are one of their huge staples.

And then the scallop, of course, porcini mushrooms from The Po Valley, Lobardia (Lombardy), that whole area, and the brown butter – that’s very Northern Italian. They use it brown butters with sautéing fish so that’s very typical instead of using olive oil, for example, they would use butter to sauté. And then the white truffle oil, of course, Piedmont, so two northern Italian dishes.

All right. Well, I’m gonna go grab a drink and then try the food. I can’t talk to you without trying the food.

And it was delicious, check it out first Thursdays at Gather!