The Minnesota Sports Facilities Authority has unveiled its design for a new Vikings stadium in downtown Minneapolis.

The Star Tribune reports that new building will be nearly twice the size of the Metrodome, with an asymmetrical shape that mimics the prow of a ship or a jagged iceberg. 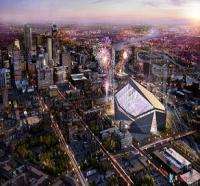 The building facade will be made of metal panels and a glazed glass curtain wall. A walkway will surround the stadium, leading fans to and from stadium gates.

Five 95-foot-tall pivoting glass doors at concourse level will allow fans to enter and exit a plaza that’s more than 2 acres in size just outside the stadium.

The design by HKS Architects skips the much-discussed idea of a retractable cover in favor of a transparent glass-like polymer that will make up the south facing section of the stadium roof.

KFAI’s Christina Cerruti talked about the plans with city officials, desginers and Vikings fans who attended the event. [Audio below]