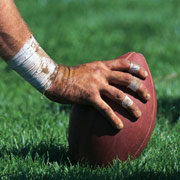 As I expected, the determination to give the Vikings a new stadium is ramping up. It is somewhat amazing how pro sports teams in this state usually end up getting what they want—and all of us foot at least some of the bills.

Governor Dayton seems determined to move this along. Polls and members of the legislature are not exactly clamoring to help, but the usual threats of moving the team are in place and I would imagine that Dayton doesn’t want to be the governor responsible for letting a major pro franchise leave.

So, despite all of our cuts to local communities, schools and health care services, the Vikings stadium issue will end up on the front burner. And, given that we have no real choice in the matter, there should, at least, be some basic absolute principles adhered to.

2. Vikings Need To Pay More – Wilf, et.al, are telling us that they expect to pay more than the $400 million on the table for the Arden Hills project. Well, if that is the case, then let’s see more serious green and let’s also lock in the Vikings to pay for cost overruns on the project. The Arden Hills report seems to indicate that this could be a significant problem. If Wilf insists on this site, then he needs to pony up the difference and any future differences.

3. State Portion Must Come From Memorabilia Tax – The state MUST say no to use of general funds or any kind of tax that comes from non-users.

A memorabilia tax will come out of the pocket of sports fans and therefore classifies as a user fee. Since the fans are the most affected and the most in favor of a new stadium, then they shouldn’t have an issue with paying the piper. Now, this kind of tax could get to be substantial if Wilf refuses to put up serious dough. And, please, let’s have memorabilia clearly defined….no fudging on language.

4. Infrastructure Changes Can Be State Responsibility – The portion of this project that relates to highway and interchange issues really is still a state responsibility. So we need to be told clearly how much would be involved with this part of the transaction. I don’t think anyone would have objections to that part of it, because traffic issues do affect the entire area and the highways that connect to it.

I think these 4 principles are fair and reasonable. A new stadium will almost assuredly increase the wealth of one Zygi Wilf. The idea that I might have to pay fees to increase his net worth is pretty abhorrent to me, but as a sports fan, I am willing to do so if it is truly the only way to make all of this work.

Personally, I want the Vikings to stay, but on principle, I think it is grossly unfair for the Vikings to get this kind of break given the enormous budget issues Minnesota faces.

I buy sports related items. I am including myself in those who will be helping to pay for this “deal.” However, considering the wealth of the Vikings owner, it seems that fairness is not in the cards.

Another case of the 1% winning the day.