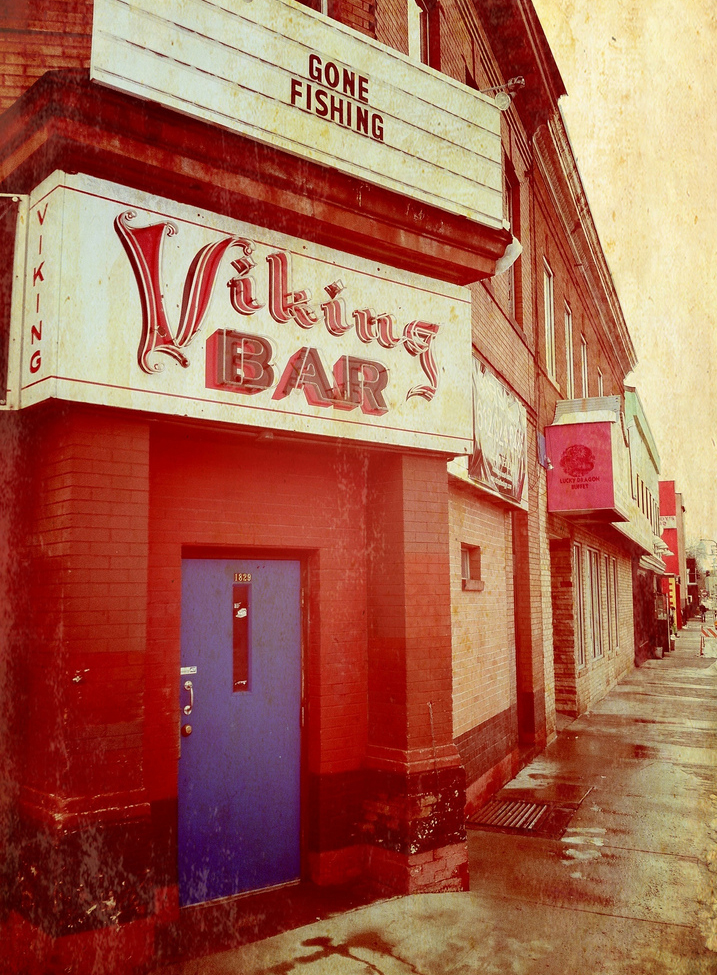 For more than six years—since August 1, 2006, the Viking Bar at Riverside and 19th Avenue South has sat empty. For that same period the marquee over its blue door, the same marquee that once advertised shows featuring “Spider” John Koerner, the Front Porch Swingin’ Liquor Pigs, and Willie Murphy, has read “GONE FISHING.”

Call the Viking’s phone—the same number that used to be picked up by Larry, George, or one of the brothers Nelson. 6-1-2-3-3-2-4-2-5-9. There will be one ring, then: Doo-doo-weep. “The number you have dialed is not in service or is assigned in a different area code. Please check the number and dial again.”

The West Bank’s changed a lot in 15 years, since Minneapolis’s unfortunate mid-90s branding as “Murderapolis.” Talk with the patrons at one of the other West Bank establishments—like Palmer’s—and that’s clear. They say there’s less crime, and the uncertainty for bars and restaurants following the smoking ban has largely dissipated.

But still the Viking remains empty behind its unchanged façade and cryptic going-out-of-business marquee. It’s all still there—and with it remain memories of its closing that might’ve seemed like the end of an era.

That’s an era that, even in this economic recovery, still might never return.

On the morning of July 31, 2006, a Monday, owner Mike Nelson sent notice via e-mail or phone—recollections vary—giving notice: that night the Viking Bar, beloved watering hole of hippies, would lock its doors forever.

Every former patron I spoke to brimmed with stories—of the legendary blues men spilling off the tiny stage, the smoker often hooked up behind a motorcycle out back, the original Grain Belt tiles, clouds of blue smoke snaking around regulars’ shoulders like a best friend’s arm. Cyn Collins penned a farewell from the Viking’s final night for the Twin Cities Daily Planet in the days after its demise. For those Viking Bar faithful, the quick closing was a shock at the time, but looking back it seems almost inevitable.

Really the beginning of the end was ten years earlier, when on September 17, 1996, eldest brother—and Viking operator—Scott Nelson was stabbed to death inside the Viking Bar by Jorge Munoz. Under suspicion of drug dealing in the bar, Nelson had asked Munoz and his companions for identification. An argument erupted, and Nelson was killed.

In what is perhaps a statement about how much time has passed since Nelson’s murder, four years ago Jorge Munoz completed his 1997 sentence for second-degree murder and now lives in Florida with one year of state supervision remaining.

Scott Nelson’s death, per family tradition, transferred responsibility to the next older brother, Mark. He and his younger brother Mike tried to pick up where Scott left off.

There was still the blues and the rebellious, counterculture spirit among the hippie regulars, but as numerous former patrons say, Scott’s death weighed heavily on his brothers, who had different skill sets and visions for the Viking’s management and future. (The Viking’s owners, contacted through their attorney, did not respond to a request to comment for this article.)

One story from those ten years after Scott Nelson’s death is that of the ice machine. It broke, but went unrepaired and unreplaced—the bar instead for years buying ice to put in the broken machine.

Former patrons will tell a story of, for example, Bonnie Raitt stopping by the Viking on her swings through town and will laugh—but give them time and they’ll stare into their beer a bit.

“What do you want to happen to that space?” I ask. 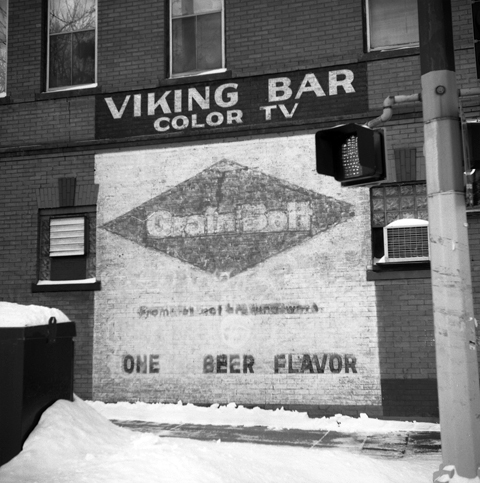 “The smoking ban did us in,” Mike Nelson told the Star Tribune on closing night. In an interview with KFAI’s Ann Alquist the same day, Nelson blamed, among others, Mayor R.T. Rybak for his support of the city’s smoking ban. Nelson, whose family had owned the bar for all of its 47 years to that point, also cited high taxes for its closing.

Following the 2005 smoking ban in Minneapolis and a ban that went into effect the following year in St. Paul, then-Governor Tim Pawlenty signed a statewide smoking ban into law in 2007.

When the ban was enacted, West Bank regulars warned that the community would lose its youthful counterculture and longstanding businesses faced declining revenue. Palmer’s owner, Keith Berg, worried openly that he might have to lay off staff following the initial decline in sales due to the ban.

Erik Funk, owner of the Triple Rock Social Club, said to Cyn Collins, “I don’t really think it’s a health issue. [The smoking ban] is a social control issue made by people who usually go to bars like TGI Fridays.” In a Star Tribune article, Willie Murphy, West Bank legend and charter member of the Minnesota Music Hall of Fame, also cited a potential cultural dilution if the Viking Bar were filled by a chain establishment.

Not only did concerns that the Viking would become an Applebee’s prove to be unfounded, recent studies (1, 2) suggest that smoking bans do not lead to industry-wide bar and restaurant job losses. In one local retrospective, KSTP’s Mitch Pittman visited Gallagher’s in West St. Paul, five years after a dispatch in which owners and patrons decried the ban as a business-killer. Pittman asked patrons and workers if minds had since changed. Those interviewed said, yes, the ban was overall a good thing. (Smoking ban advocate ClearWay Minnesota’s 2008 survey showed similar support.)

On the West Bank, Palmer’s was able to adapt in part because they had space to add a smoking patio behind the bar. Gallagher’s also made a similar, if expensive, addition.

Viking Bar owner Mike Nelson said in 2006 interviews that the Viking lacked the space and capital for such additions. In previous searches to increase revenue, the bar, which also leases two apartments on the second floor, installed billboards and the cell phone tower on the roof. These are featured prominently in current fliers advertising the building’s sale. 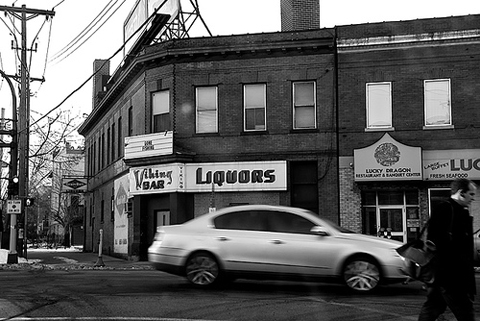 If a deal was made, it wouldn’t be the first agreed-upon sale of the Viking since its closure. Four months ago, the estate of Juliet Nelson, the deceased mother of the brothers Nelson, canceled the Viking Bar’s sale because of the buyer’s default in October 2011. A person familiar with the sale cited unexpected costs stemming from the Viking’s reclassified liquor license.

The bar had been grandfathered into an unrestricted liquor license, allowing for the sale of alcohol to make up any portion of the bar total sales. The Viking Bar lost the grandfathered unrestricted license by remaining shuttered for more than a year and now falls under an on-sale wine license, or commonly called a “60-40,” meaning a minimum of 60% of total sales must come from food.

The problem: After it would be sold for presumably somewhere between the 2011 estimated market value of $380,000 and the initial asking price of $475,000, the Viking would require upgrades to meet the building code as well as to meet the new liquor license’s food requirement. The bathrooms need work, and the cost of putting in a kitchen is estimated to be around $100,000, which would cut into the 1,800 square feet of available floor space.

The Viking holds a symbolic position as an entry point for coming to the West Bank south on 19th or west on Riverside, or from the University of Minnesota’s business, public policy, and law schools—but with the narrow margins of a bar and the large up-front costs to get the Viking going again, its sale may not be imminent. “There are interested parties,” said a representative for Urban Anthology real estate, the firm handling the sale. But for now, it seems the work needed has given each potential buyer pause.

Of course, one of the buyers could abandon the bar’s heritage, rip up the Grain Belt tiles, blow out the walls, and replace them with glass to convert the building into potentially more lucrative office space. The space would be filled, but it’s hardly the first choice for the Viking’s old patrons and other West Bank regulars.

“[The Viking] was too good to be true,” said Mary True, who works at Augsburg College and regularly takes prospective students by the empty bar. She was at the Viking’s closing party—one of many fond memories she shared of the bar before pausing to say, “It’s sorely missed.”

And so she, like the others, will wait on—to see if the Viking reopens and whether they’ll even recognize it if it does.