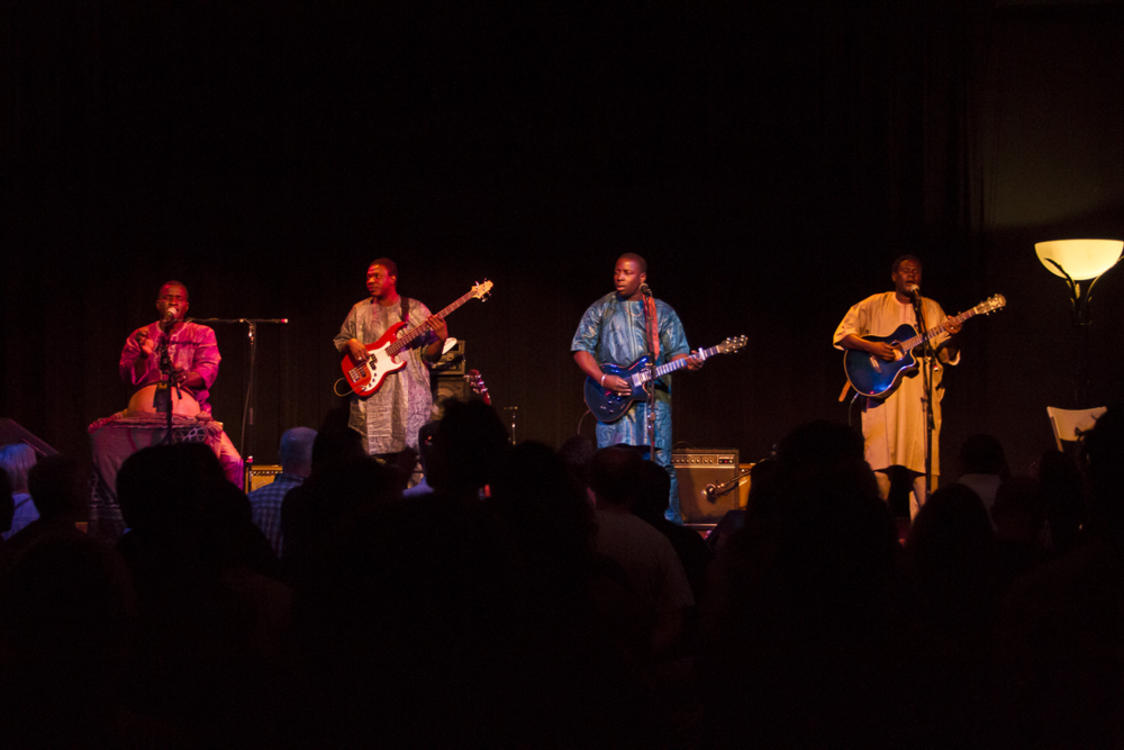 The Cedar Cultural Center’s African Summer series rolled on the night of July 9 with a concert from Malian guitar whiz Vieux Farka Touré. Touré and his band are on tour in support of their new album, Mon Pays, which translates to My Country. Over the past 18 months, Mali has been partially overtaken by Islamic extremists, who have brought violence and additional suffering to an already poor nation. The album, a tribute to the musical heritage of the country, had been planned before the violence began but sends a political message as the extremists have banned music in areas they control.

Like Femi Kuti, another musician who was part of the series, Touré is the son of a legendary African musician and carries on the family tradition. He is the son of Grammy-winning guitarist Ali Farka Touré, and like the younger Kuti did weeks earlier, Touré made it clear that there is plenty of talent to go around the family.

After performing the first song of the night with an acoustic guitar–which was unsurprising as his new album is predominantly acoustic–he switched to an electric guitar and stayed there the whole time. Like his father, he and his band played blues and folk fused with a more upbeat, danceable sound throughout the roughly 90-minute show. The four-person band included Touré on lead guitar, a rhythm guitarist, a bassist, and a percussionist, who was using a Calabash, which is a dried out gourd (picture someone playing a globe as an instrument).

The percussive sound was somewhat limited, as the Calabash was hit with small sticks and the drummer’s hands, but along with a prominent bass guitar, it did result in some very unique sounding rhythms to pair up with the blues-y guitar playing and singing. Many of the songs had long instrumental sections that allowed the band to show off their instrumental and vocal chops, Touré most of all, who tore through several impressive guitar solos with very quick fingers.

Touré and his band seemed a bit reserved early on in the show, there was little banter (there was clearly at least a little language barrier) and there wasn’t much dancing on stage. By the end of the show though, Touré was joking with the audience and urging them to dance, and he and his band took turns showing off their dance moves while looking much more loose on stage. The crowd of about 200 was very into the show, and despite most of the audience sitting on the floor during the opener, they were bumping during many of the songs Touré and his band played, especially through a series of upbeat songs that lead into the encore break.

While the blues may not be as bluesy if you can’t understand the words being sung, the songs were still very powerful in the context of what is happening in Mali right now. Touré himself said “Banning music was another way to control the people. Music for us is life. When we have no music, it is like we have no life.” Like many political African musicians before him, he has shown that music is not just a collection of sounds, it can also be a message, and that message was loud and clear at The Cedar.