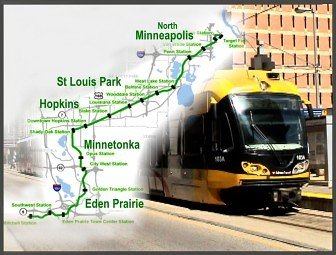 The Southwest Light Rail Project’s future is considered on the special edition of Democratic Visions.

Among our regional elected’s, Hennepin County Commissioner Peter McLaughlin remains one of the strongest voices for an up-to-date public transit system in the Twin Cities metro area. McLaughlin chairs The Hennepin County Regional Railroad Authority and the Counties Transportation Improvement Board. The HCRRA has committed to fund 10% and the CTIB, 30% of the Southwest Light Rail Transit project being planned to connect Eden Prairie, Minnetonka, Hopkins, Saint Louis Park and the west lakes district of Minneapolis and the southern fringe of North Minneapolis to the Blue and Green LRT lines at Target Field. The State of Minnesota will shovel-in 10%. The plan has been to qualify for Federal Transportation Agency monies which would account for 50% of the project. But, dear possums, as we all know, its complicated. SWLRT now involves a $2 billion price tag, an upset Governor Dayton, transit equity activists in North Minneapolis and Eden Prairie, economic growth, law suits, 5 cities, three exurban counties and Hennepin and Ramsey, anti-rail buzzards along Kenilworth and Eden Prairie LRT alignments, pro-LRT businesses and employers along the entire route, the Met Council, the EPA and scores of anonymous trolls in the reader comments sections of the Strib. Without interference from pundits, Peter McLaughlin and host Tim O’Brien measure the challenges to and the promise of the troubled project in a special edition of Democratic Visions. Long time SWLRT and bus transit proponent Eden Prairie Mayor Nancy Tyra-Lukens, also provides her perspective on likely station cuts noting that thousands of jobs will remain too difficult to get to for public transit dependent people along SWLRT corridor.