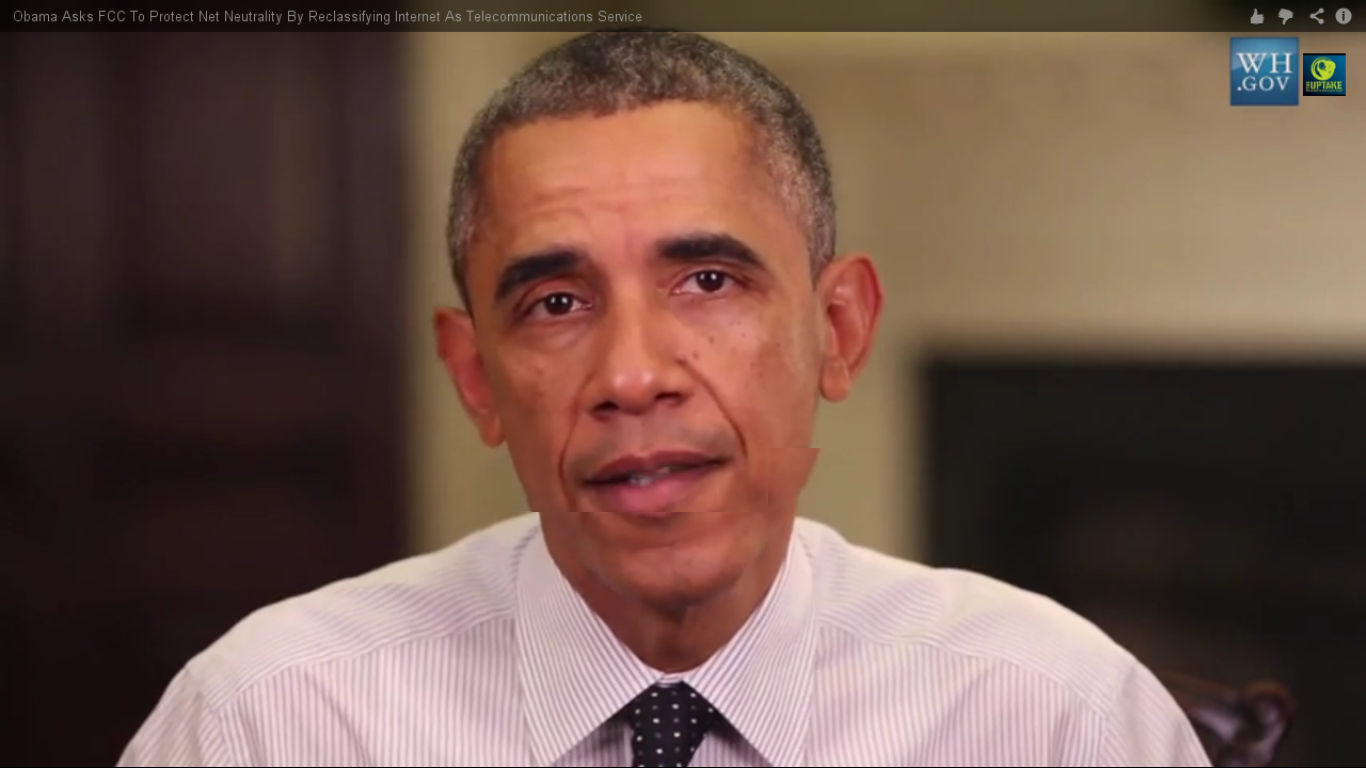 President Obama is asking the Federal Communications Commission to change the classification of the Internet to a telecommunications service…which is a wonky way of saying he wants them to protect net neutrality.

According to the President Obama, these are the four big things the reclassification would mean:

No blocking. If a consumer requests access to a website or service, and the content is legal, your ISP should not be permitted to block it. That way, every player — not just those commercially affiliated with an ISP — gets a fair shot at your business.

No throttling. Nor should ISPs be able to intentionally slow down some content or speed up others — through a process often called “throttling” — based on the type of service or your ISP’s preferences.

Increased transparency. The connection between consumers and ISPs — the so-called “last mile” — is not the only place some sites might get special treatment. So, President Obama is also asking the FCC to make full use of the transparency authorities the court recently upheld, and if necessary to apply net neutrality rules to points of interconnection between the ISP and the rest of the Internet.

No paid prioritization. Simply put: No service should be stuck in a “slow lane” because it does not pay a fee. That kind of gatekeeping would undermine the level playing field essential to the Internet’s growth. So, Obama is again asking for an explicit ban on paid prioritization and any other restriction that has a similar effect.

Enjoy the amusing “buffering” open in the video.

Transcript of the video

Hi everybody.
Every since the Internet was created, it’s been organized around basic principles of openness, fairness and freedom.

There are no gatekeepers deciding which sites you get to access. There are no toll roads on the information superhighway.

This set of principles — the idea of net neutrality has unleashed the power of the Internet and given innovators the chance to thrive.

Abandoning these principles would threaten to end the Internet as we know it.

That’s why I’m laying out a plan to keep the Internet free and open. And that’s why I’m urging the Federal Communications Commission to do everything they can to protect net neutrality for everyone. They should make it clear that whether you use a computer, phone, or tablet, Internet providers have a legal obligation not to block or limit your access to a website.

Cable companies can’t decide which online store you can shop at, or which streaming services you can use. And they can’t let any company pay for priority over its competitors.

To put these protections in place, I’m asking the FCC to reclassify Internet service under title 2 of a law known as the Telecommunications Act.

In plain English, I’m asking them to recognize that for most americans the Internet has become an essential part of everyday communication and everyday life.

The FCC is an independent agency and ultimately its decision is their’s alone. But the public has already commented nearly four million times asking the FCC to make sure the consumers, not the cable company, gets to decide which sites they use.

Americans are making their voices heard and standing up for the principles that make the Internet a powerful force for change.

As long as I’m president, that’s what I’ll be fighting for too.

Written statement from the White House

An open Internet is essential to the American economy, and increasingly to our very way of life. By lowering the cost of launching a new idea, igniting new political movements, and bringing communities closer together, it has been one of the most significant democratizing influences the world has ever known.

“Net neutrality” has been built into the fabric of the Internet since its creation — but it is also a principle that we cannot take for granted. We cannot allow Internet service providers (ISPs) to restrict the best access or to pick winners and losers in the online marketplace for services and ideas. That is why today, I am asking the Federal Communications Commission (FCC) to answer the call of almost 4 million public comments, and implement the strongest possible rules to protect net neutrality.

When I was a candidate for this office, I made clear my commitment to a free and open Internet, and my commitment remains as strong as ever. Four years ago, the FCC tried to implement rules that would protect net neutrality with little to no impact on the telecommunications companies that make important investments in our economy. After the rules were challenged, the court reviewing the rules agreed with the FCC that net neutrality was essential for preserving an environment that encourages new investment in the network, new online services and content, and everything else that makes up the Internet as we now know it. Unfortunately, the court ultimately struck down the rules — not because it disagreed with the need to protect net neutrality, but because it believed the FCC had taken the wrong legal approach.

The FCC is an independent agency, and ultimately this decision is theirs alone. I believe the FCC should create a new set of rules protecting net neutrality and ensuring that neither the cable company nor the phone company will be able to act as a gatekeeper, restricting what you can do or see online. The rules I am asking for are simple, common-sense steps that reflect the Internet you and I use every day, and that some ISPs already observe. These bright-line rules include:

No blocking. If a consumer requests access to a website or service, and the content is legal, your ISP should not be permitted to block it. That way, every player — not just those commercially affiliated with an ISP — gets a fair shot at your business.
No throttling. Nor should ISPs be able to intentionally slow down some content or speed up others — through a process often called “throttling” — based on the type of service or your ISP’s preferences.
Increased transparency. The connection between consumers and ISPs — the so-called “last mile” — is not the only place some sites might get special treatment. So, I am also asking the FCC to make full use of the transparency authorities the court recently upheld, and if necessary to apply net neutrality rules to points of interconnection between the ISP and the rest of the Internet.
No paid prioritization. Simply put: No service should be stuck in a “slow lane” because it does not pay a fee. That kind of gatekeeping would undermine the level playing field essential to the Internet’s growth. So, as I have before, I am asking for an explicit ban on paid prioritization and any other restriction that has a similar effect.
If carefully designed, these rules should not create any undue burden for ISPs, and can have clear, monitored exceptions for reasonable network management and for specialized services such as dedicated, mission-critical networks serving a hospital. But combined, these rules mean everything for preserving the Internet’s openness.

The rules also have to reflect the way people use the Internet today, which increasingly means on a mobile device. I believe the FCC should make these rules fully applicable to mobile broadband as well, while recognizing the special challenges that come with managing wireless networks.

To be current, these rules must also build on the lessons of the past. For almost a century, our law has recognized that companies who connect you to the world have special obligations not to exploit the monopoly they enjoy over access in and out of your home or business. That is why a phone call from a customer of one phone company can reliably reach a customer of a different one, and why you will not be penalized solely for calling someone who is using another provider. It is common sense that the same philosophy should guide any service that is based on the transmission of information — whether a phone call, or a packet of data.

So the time has come for the FCC to recognize that broadband service is of the same importance and must carry the same obligations as so many of the other vital services do. To do that, I believe the FCC should reclassify consumer broadband service under Title II of the Telecommunications Act — while at the same time forbearing from rate regulation and other provisions less relevant to broadband services. This is a basic acknowledgment of the services ISPs provide to American homes and businesses, and the straightforward obligations necessary to ensure the network works for everyone — not just one or two companies.

Investment in wired and wireless networks has supported jobs and made America the center of a vibrant ecosystem of digital devices, apps, and platforms that fuel growth and expand opportunity. Importantly, network investment remained strong under the previous net neutrality regime, before it was struck down by the court; in fact, the court agreed that protecting net neutrality helps foster more investment and innovation. If the FCC appropriately forbears from the Title II regulations that are not needed to implement the principles above — principles that most ISPs have followed for years — it will help ensure new rules are consistent with incentives for further investment in the infrastructure of the Internet.

The Internet has been one of the greatest gifts our economy — and our society — has ever known. The FCC was chartered to promote competition, innovation, and investment in our networks. In service of that mission, there is no higher calling than protecting an open, accessible, and free Internet. I thank the Commissioners for having served this cause with distinction and integrity, and I respectfully ask them to adopt the policies I have outlined here, to preserve this technology’s promise for today, and future generations to come.

From Senator Al Franken (D-Minn) who has been a vocal advocate in for net neutrality and has called it the “free speech issue of our time.”

“I welcome today’s news that President Obama is pressing the FCC to maintain a free and open Internet. He joins a chorus of more than 3.5 million Americans who have told the FCC that killing net neutrality is a terrible idea, and who strongly believe a very simple principle: there shouldn’t be one Internet for deep-pocketed corporations and a separate Internet for everyone else.

“What the President is asking the FCC to do—to reclassify Internet service as a utility—is simply common sense, and it would ensure that rich corporations couldn’t pay for an Internet fast lane. That’s why over the summer, I and several of my colleagues urged the FCC to do just that.

“Net neutrality is a simple concept: all content on the Internet must travel at the same speed. It’s been the architecture of the Internet since it was created. It’s made the Internet a platform for enormous innovation and economic growth. And it should stay that way. I hope the FCC agrees.”

From Demand Progress which was a lead organizer of the Internet Slowdown Day in September which drove over 700,000 comments to the FCC and nearly 300,000 calls and two million emails to Congress in one day

“The President has made it clear that he supports Title II reclassification as the best way to achieve Net Neutrality, an issue he campaigned on and has supported for years. This is a huge victory for the millions of Americans who have called for Title II reform, and a huge blow for the cable companies that seek to establish fast and slow lanes on the Internet. We are now one step closer to true Net Neutrality, and the onus is clearly on the FCC and Chairman Wheeler to ensure they deliver the Net Neutrality rules that the President and the public support.”