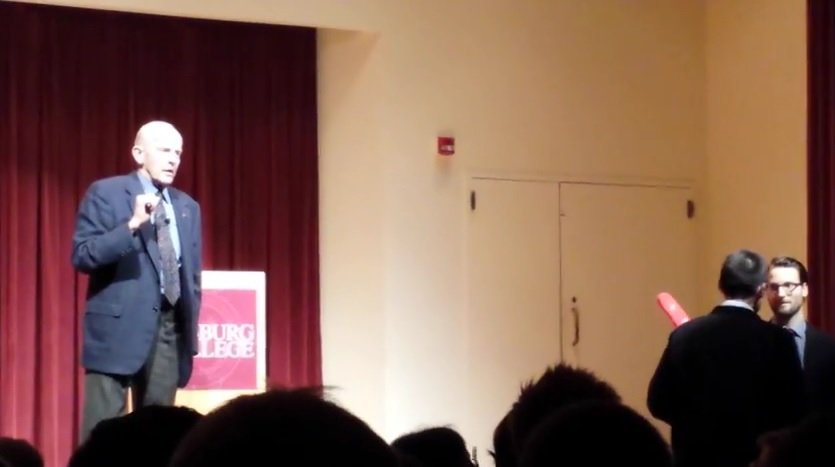 Inside, a packed auditorium listened to KSTP owner Stanley Hubbard present his points on the success of broadcast journalism. But the sold out event wasn’t because of Hubbard’s insights into broadcasting. About a third of the audience there, organized by Augsburg’s Minnesota Public Interest Group and Neighborhoods Organizing for Change, were there to demand a public apology for KSTP’s report.

Less than 30 minutes into Hubbard’s speech, protesters interrupted the event demanding he apologize on air. Watch the unedited video below to see what happened, or keep reading to find out more.

“Speaking of integrity,” says a man wearing a large, red foam hand. “We demand an apology on air.”

The foam hand, the kind seen at sports events, is pointing with one finger, and at this point dozens of protesters stand up in the auditorium, all wearing the same red finger.

“No, of course not,” Hubbard replies to the man. “That’s ridiculous … Multiple credible, law enforcement agents told our reporter Jay Kolls that the sign that the mayor had, whether it was advertent or whether she didn’t know, was a gang sign. And she made that sign together with a guy who was a convicted criminal.”

“His name is Navell Gordon,” interrupts a second protester.

“That’s the problem,” the second protester yells back.

“We covered his face so not to embarrass him,” Hubbard says.

“He’s a person, not a blur,” shouts a third protester.

More shouts ensue, and Hubbard asks to finish his story.

“His name is Navell Gordon,” several protesters shout back.

“Interestingly,” Hubbard continues over the shouts, “right at that time, this man had a website. And I’ve got his website pictures, where he had a gun in his belt, he’s calling the police pigs, and he’s going like this [pointing with his thumb sticking up] with other people. And guess what? That website was taken down right after we contacted the mayor’s office.

“You’ve been sucked in, folks,” Hubbard says. “I’ll say one more thing to you. We do not micromanage our news department.”

“You should,” responds one of the protesters. The protester then calls Jay Kolls a racist.

“That’s not true,” Hubbard replies. “Total nonsense. If you’re going to have a decent news organization, you let them do their job, and you stay out of their hair.”

“Did you do any research to test their claims?” asks a protester.

“Yes, we talked to multiple law enforcement agencies and asked if there is any truth to this,” Hubbard says. “Now, I’m sorry I’m not as smart as all of you people with your signs, but I do my best.”

Several people in back begin clapping and an Augsburg moderator then tries to end the conversation, but a man stands up requesting one more question.

“When I was raised like you were, old people talked about common sense, right?” the man says. “I hear you saying that you talked to multiple police departments. But common sense tells you that pointing is not a problem, sir.