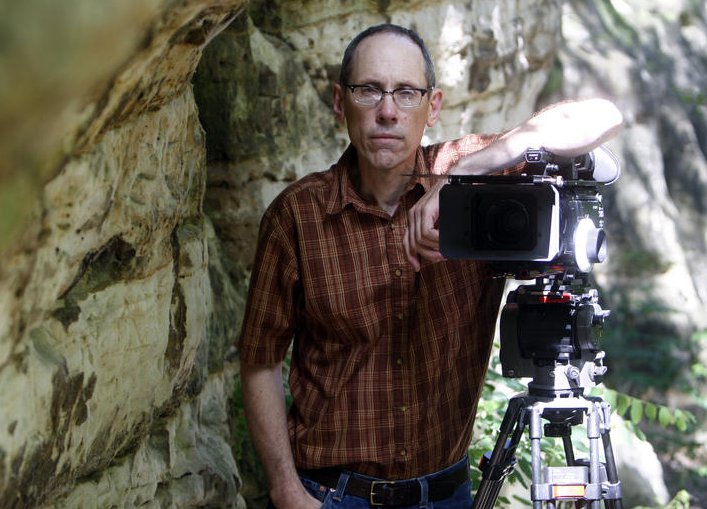 Back in late June, Bluestem looked at the controversy brewing over silica sand mining in rural Goodhue County in Connecting the dots on fracking sand: from Hay Creek Township’s citizens to the New York Times.

To illustrate the issue, the post contrasted an aerial photograph of the Hay Creek Township site in Goodhue County with two satellite photos of Uniminn pits in LeSueur County. The Hay Creek Township photo was pulled from the Citizens Against Silica Sand Mining’s Facebook page.

Today’s Rochester Post Bulletin profiles the person behind the photos and Youtubes that CASSM posts on its wall in Veteran videographer puts a face on silica sand ‘problem’. From Brent Boese’s article:

Jim Tittle’s work has been featured prominently on the History Channel, the Home Shopping Network and on the campaign trail of “a comedian turned politician,” but the freelance videographer’s most recent efforts have been done on a smaller, more personal scale.

As a member of the “Citizens Against Silica Mining” group in Goodhue County, he’s spent the last three months helping disseminate information the best way he knows how — through video. He’s spent hundreds of hours traveling throughout the Midwest to interview local citizens and get first-hand looks at communities affected by silica sand mines. . . .

Behind the paper’s firewall, Boese details the work Tittle is doing:

“We know the mining companies will do whatever it takes to get what they want in Goodhue County and all of southeast Minnesota,” John Tittle said. “It’s a big issue.”

Silica dust has been linked to cancer and silicosis, a respiratory disease. Trucks will be traveling from the mining site near Red Wing to the transfer site near Lake City at all hours of the day, potentially passing right past the local college, high school and assisted living facility. Concerns linger about noise and potentially deadly dust being distributed throughout the route.

The mining project may negatively affect the scenic bluffs, Hay Creek campgrounds and the river, which has been reclaimed in recent years by Minnesota’s chapter of Trout Unlimited. Typical silica mining sites also require around two million gallons of water a day, which may affect the local environment.

Jim Tittle said that while his current focus is on educating the public through short YouTube clips, he hasn’t ruled out creating a full-blown documentary with the footage he’s accumulated.

“We’re in the middle of what looks to me is a big gold rush,” he said. “There’s a lot of profit to be made in this. Because of that, you’re going to find corporations grabbing to get as much as they can as fast as they can. And there’s a lot of propaganda coming from that side. Again, I’ve worked in the media, and I’ve seen how that works.

“I know I’m biased, and you know I’m biased. I’m not pretending to be Walter Cronkite,” Tittle said. “But I am picking up real people and real facts. I’m trying to present a rational, substantiated view of the problems that might otherwise be overlooked.”

According to Sand mine opposition brings moratorium idea to Red Wing City Council, the Goodhue County Planning Advisory Commission was to meet on Monday to discuss the idea, but t the public comment period was closed after testimony was heard in June and the issue was tabled. Citizens were not be invited to speak on the issue at Monday’s meeting.

It’s clear that Tittle, his family and friends in Goodhue County have their work cut out for them. The Red Wing paper reports that Planning Commission advises against sand mine moratorium, but the Post Bulletin provides the most extensive coverage of the meeting.

After a lengthy debate before a standing-room-only crowd for the second consecutive meeting, Goodhue County’s Planning Advisory Commission decided to recommend denial of a request for a one-year moratorium on silica sand mining.

Five of the eight commissioners voted for denial Monday night, but it’s far from a dead issue. The Goodhue County Board will take the recommendation under advisement.

One commission member decidedly has his head in the sand:

“We have a good ordinance,” said planning commissioner Howard Stenerson, who pushed hard for denial at both meetings and made the motion to do so. “I’m really not interested in what might happen in the future. It’s not whether we like or don’t like a proposal (from Windsor Permian) coming down the road. It’s whether we can handle it. I think we can.”

A Windsor Permian representative was supposed to be on hand for the meeting, but no one identified themselves as such. Bernie Overby, chairman of the planning commission, said he wouldn’t have allowed a representative to speak anyway because the public hearing was closed.

The citizens were dismayed but aren’t discouraged, Boese reports:

“We’re very disappointed,” Frontenac resident Jody McIlrath said. “It seems as though because they didn’t have all the facts, they wanted to deny the moratorium. It should be the other way around. But it’s far from over.”

“I think we quickly turn our focus to the county commissioners,” said Keith Fossum, who proposed the moratorium along with Barb Tittle. “And I think we’re going to get a different result because they are much more attuned to the community.”

One county commissioner is already on their side:

Commissioner Ron Allen offered the counterpoint to Stenerson most of the night. His support for the moratorium means one of the five county commissioners is already on their side. They need to convince two others to get their wishes and are still working to secure support elsewhere. . . .

. . .”I guess the question is, do we want to be proactive or react to a problem?” Allen said. “I guess I don’t want to be in a reactive mode, and a lot of people here feel the same way. … When we have this many concerned citizens coming before our board, I think we have to take this seriously.”

This is shaping up to be a classic David v. Goliath battle between citizens asserting local control and defending their property against a corporation. And while Jim Tittle is giving a face to the citizens through his videos, it’s telling that Windsor Permian didn’t show its face at the public meeting on Monday night.