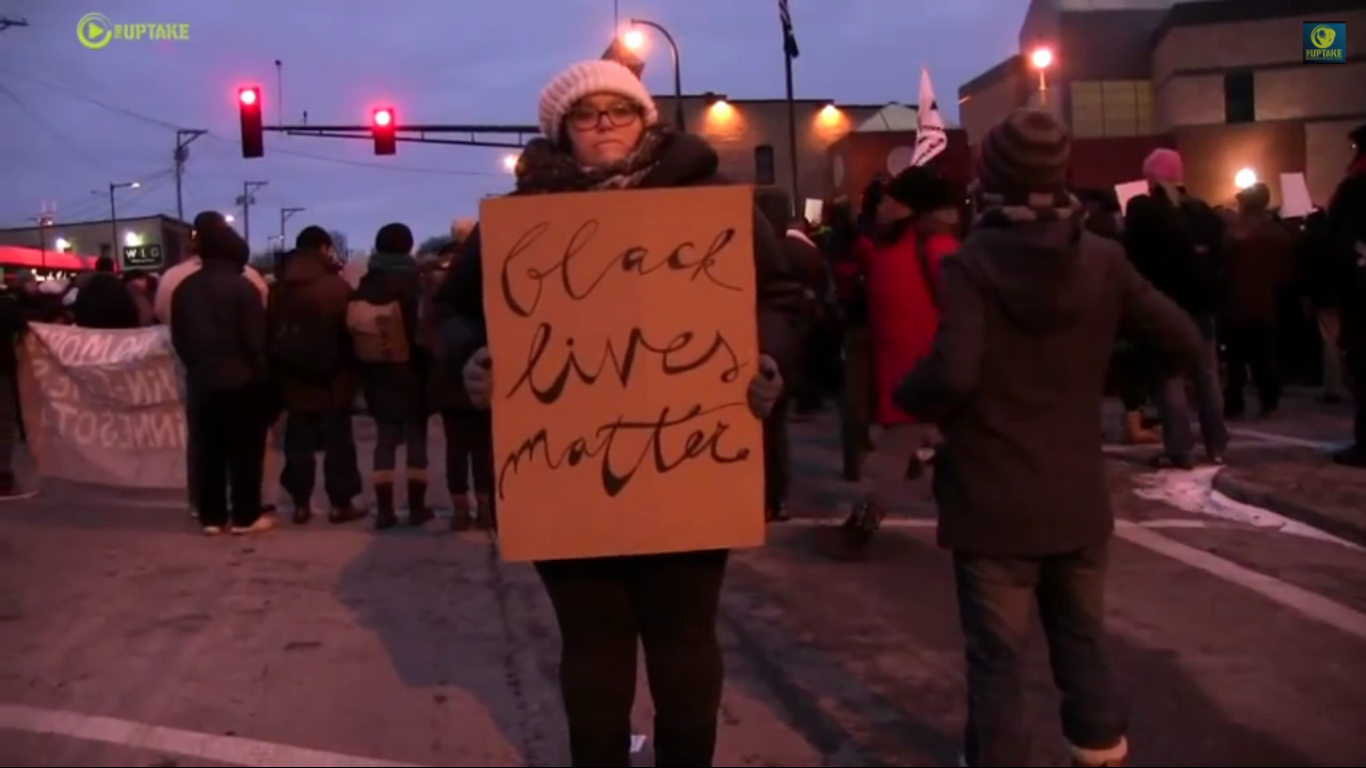 More than 300 solemn demonstrators rallied in front of a Minneapolis Police station on Tuesday to protest the refusal of a grand jury in Ferguson, Missouri, to indict police officer Darren Wilson for the the killing of Michael Brown, a black teen.

The police action has produced sharp reactions from the Missouri community, the nation and the federal government. After the grand jury decision was announced Monday night, President Obama met with the White House Press asking for non-violent actions.

“Being here in solidarity with your community is an appropriate response,” said a woman holding a “Stand on the side of Love” sign. “I’m concerned about what is going to happen. Non-violence is the way to go, but we need to stand with our community because we’re on the side of love and that’s where we have to be.”

The very diverse group in Minneapolis — at the intersection of Minnehaha and Lake Street, in front of the Minneapolis Police Precinct 3 office — was loud, intensely angry but mostly very orderly. They did block the intersection and one young woman was slightly injured in an encounter with an automobile going through the intersection. There were no police officers in evidence in the immediate proximity of the crowd, but squad cars blocked intersections in the surrounding area.

Crowd reflects the face of America

The rally included a wide range of ages and racial groups. Many young children accompanied their parents. It was the face of America.

A caucasian woman held a folder with the words “My grandsons’ lives matter”. “They’re African-American and I worry about them every day,” she explained. “One just started college, a 14-year-old and a 12-year-old. I don’t know if they understand the reality of what could happen. I do.”

“Wake Up — Racism Still Exists” read one sign held high above the crowd.

“The Fundamental Danger Of A Non-Indictment Is Not More Riots. It Is More Darren Wilsons”, read another sign.

“We’re going to take it to the streets here and get our voices out,” said a woman bundled up against the late fall cold. “And maybe our goal here is to get some body cams on the police that really need it instead of the ones that volunteer.” Minneapolis just started testing body cams on police, devices that can provide a definitive video record of what police do. The idea is to provide more police accountability and also shield officers from groundless accusations. Thirty-six officers volunteered to wear the recording devices, but they are not mandatory and police decide when to turn them on or off.

Helicopters buzzed overhead as the twilight gave way to night. A food truck parked behind the police station was passing out free food, including grilled cheese sandwiches.