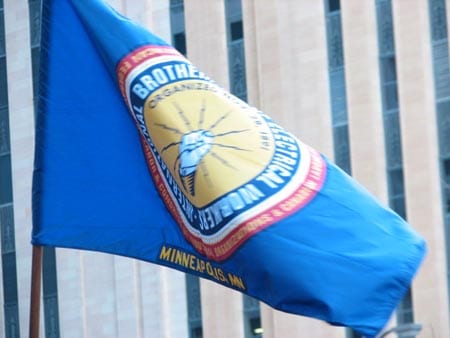 Why are these Occupy protests happening? I talked to some of the people participating Saturday the 8th, the second day of the protest at Government Plaza in Minneapolis, and let them tell their own stories. I’ve posted a couple videos below and some photos. If you watch these and listen to other people who get to talk rather than being mocked in some Erin Burnett-style coverage, you’ll hear common themes of unemployment, debt, and anger  over bailouts of corporations which can’t be bothered to return the favor.

This was my first attempt at video, so please excuse any amateurishness as either an interviewer or editor (and as a photographer — I tried several times to get the IBEW flag with the logo clearer, but the wind beat multiple attempts). I asked open ended questions because I want viewers to hear protesters’ own words as to why they’re there.

Voluntary disclosure, I happen to know the person in this video. I don’t think that makes any difference, but just so everything is on the up and up

This photo below shows Hennepin County Sheriff Rich Stanek and one of his deputies appearing to be chatting amiably with protesters. I didn’t listen in on the conversations, but they seem amiable from the body language. Quite the contrast to New York City, where the police have been pointlessly hostile to peaceful protesters. 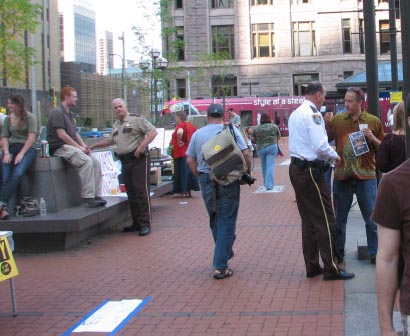 The photo is portable privies. Why a photo of privies? To embarrass New York City, which won’t let protesters rent privies. Participants in Occupy Wall Street are going to nearby businesses and figuring out some other ways to make do. Hennepin County and Minneapolis have been much more accommodating, and so far as I’m aware, everyone is getting along. So look Mayor Bloomberg and the NYPD, it’s not such a big deal: 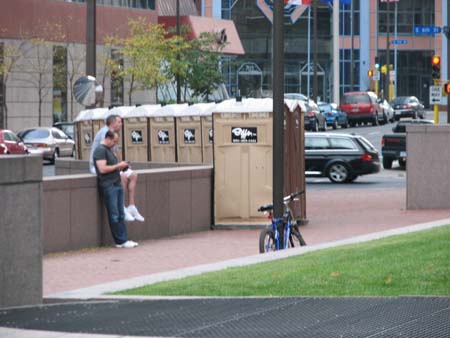 Now this is first-timer-friendly protesting — a lending library for signs: 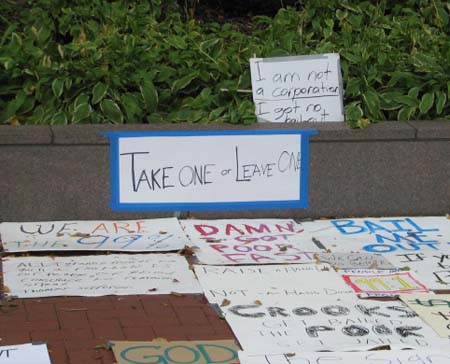 This was my personal favorite sign of the day. It says, “I’ll believe a corporation is a person when one is shunned for being gay.” 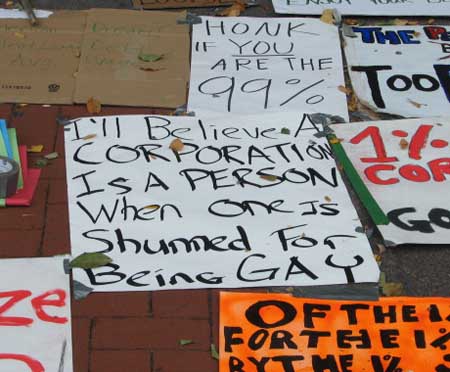 And here is where signs come from. Since we hear conservatives off-handedly calling protesters slobs and filthy (with no concern for whether it’s true of course), I wanted to point out they’re being careful to keep the paint off the grass. 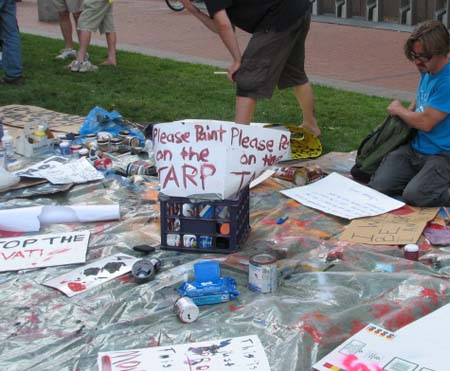 Listening to people at Occupy MN and interviews I heard with other people we might describe as 99 percenters (distinct from 99ers, which refers to the maximum number of weeks an unemployed person can receive unemployment insurance) we hear some common themes:

Anger that corporations got bailed out and gave executives enormous amounts of money even in failure, but won’t use that estimated $3 trillion cash hoard to hire unemployed people. Anger that these corporations use their political influence to convince politicians to oppose helping the people struggling from the recession while giving corporations ever more public money.

Unemployment is now considered a cause to refuse to look at an unemployed person’s job application. People willing to work two jobs can’t find any. Families break up in an attempt to find work far from home.

People were told the right thing to do is get an education even if it means taking on as much debt as necessary to pay for it, because you’ll be OK. Not rich probably, but OK. Instead, student loan debt has never been so crushing as tuition keeps rising while grants fall, and graduates can’t make enough even to make their loan payments.

You’re supposed to buy a home if you’re a responsible person, but when the mortgage market crashed and the banks were rescued, conservatives formed the tea parties not in anger over the banks getting helped, but in anger that home owners might get help. Go re-watch Rick Santelli’s infamous rant if you think I’m misremembering. Banks which illegally foreclosed with fake paperwork were basically just told to stop. Bankruptcy judges are actually prohibited from reworking mortgages. Saving a homeowner is a moral hazard, but saving some derivative scammer’s bonus is a sacred contract.

Don’t forget medical debt. Many people in trouble have stories of being fine until someone got injured or sick, they couldn’t get insurance or it ran out or it stiffed them, and now they’re heavily in debt while being unable to work. In no other first world nation does this happen. People might be left unable to work, but they at least don’t have to worry about medical bills. Even the modest reforms of the new health care law, where even stuck with the private system, we should at least be sure of getting insured, might be tossed by the ideologues on the US Supreme Court.

In other words, there was a deal in which if we followed the rules, we would be OK. No promise of great wealth, but OK. Maybe there’s no expensive wine with meals, but no wondering where the next meal comes from. You might not get your preferred career track, but if you’re willing to do an honest job, there will be something. You might not get a mansion, but you’ll have a secure roof over your head. Then guess what happened: some powerful people broke the rules, endangered the economy, got bailed out to avoid a second Great Depression, and now don’t care about those who saved them.

The 99 Perceners aren’t asking for much. They’re just asking that the 1% keep their end of the bargain. So far, all they’re keeping is the money. So that’s why I was there, to tell the 1% to keep the bargain. A lot of the people protesting, maybe most, are doing OK themselves, but we were there for many who aren’t OK. We’re all in this together.