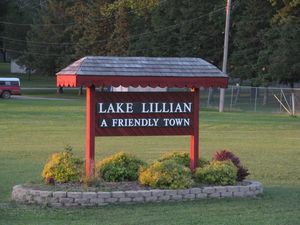 Nestled beside a shallow lake just off Highway 7 in Kandiyohi County, Lake Lillian (pop. 238) has been undergoing a bit of a revival of late. There’s a new restaurant and several other new businesses on Main Street, and when Bluestem drives through, there’s a noticeably increase in cars parked there.

Not that anyone steped up to be mayor.

The West Central Tribune reports in No decision on Lake Lillian, Minn., mayor:

Lake Lillian City Clerk Susan Jungclaus said Thursday that Kenneth Wittman has not decided whether he will accept or decline the job as the town’s mayor.

Wittman, one of four council members, was elected mayor and was the top vote-getter with 13 write-in votes.

Wittman had not sought the office. Jungclaus said she talked to Wittman on Wednesday and he said he was going to think about it for a while.

The town council wil canvass the election result on November 13, but there’s no set date by which Wittman has to make up his mind.

He’s got time to weigh the decision, and there’s not much anything anybody can do until next year if he decides to forgo higer office:

The council cannot do much until the first of the year because if Wittman decides to decline at the first meeting in January, then council members make a motion that there is an opening and appoint one of the four members to serve as mayor, Jungclaus said.