Monday was Senior Citizen day at the Minnesota State Fair and I made my way over to fulfill my annual ritual, now stretching back to the mid-1960s when I first arrived in the Twin Cities.

This year found me less engaged than in the past – no particular reason. Maybe next year I won’t be back. But…next year there will be that deep-fried cheese curd gene that will kick in, and I’ll be back for my annual fix. One basket of those critters is a great plenty. Thankfully, they haven’t raised the price, which means they’ve reduced the portion size. At my age I don’t need even a single small basket. But so it goes.

One of my ritual stops is at the Leinie Lodge Band Shell, and when I stopped there on Monday, the 34th Infantry (Red Bull) Division Band was about to conclude its gig before a full house, and they were just about to begin a medley of the anthems of the various branches of military service. The announcer asked that vets of those branches rise to be recognized when their anthem was played. First, a few Marines; then Navy; then Air Force; then Coast Guard; then my branch, the Army. Lots of folks stood up, mostly men, mostly old. It was a rather stirring and emotional time, recognizing the vets, one of which was me. 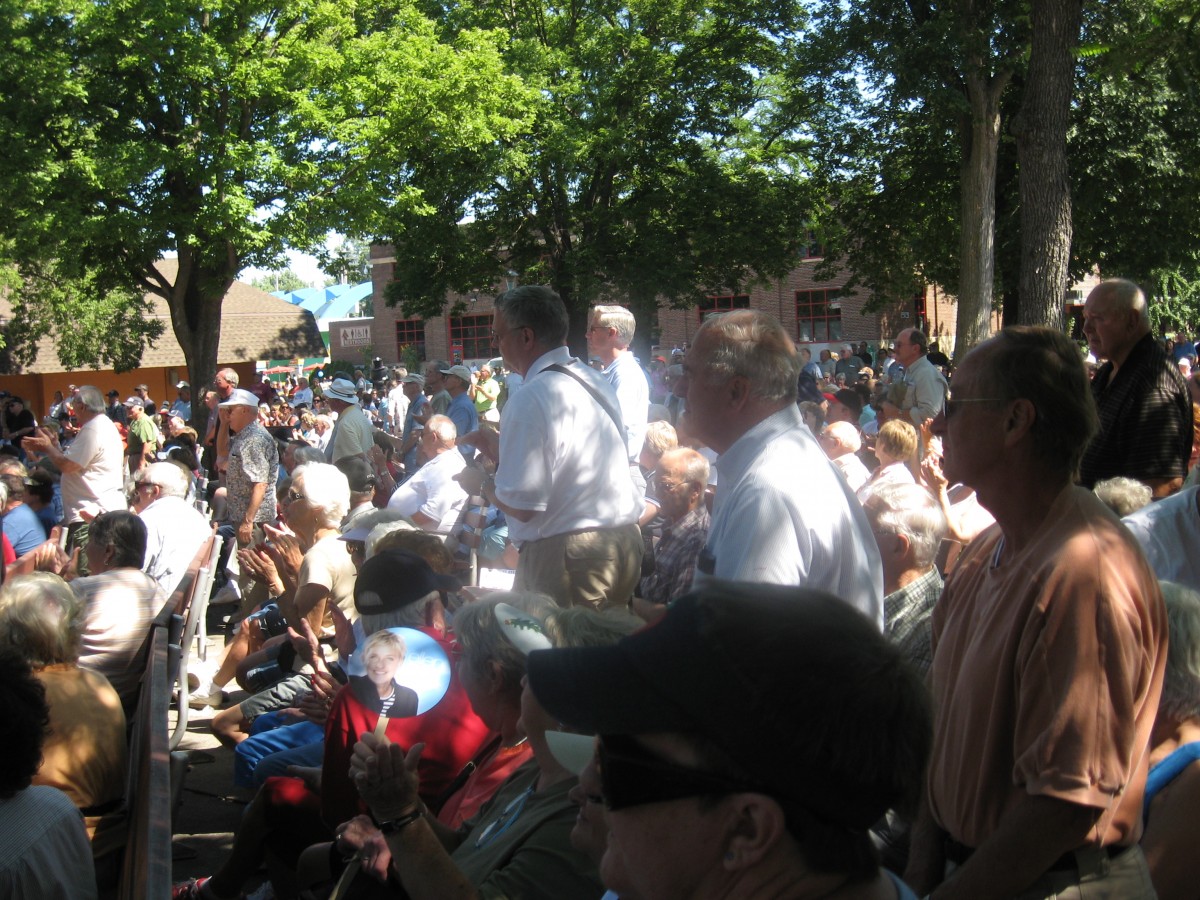 Vets rising to be recognized at the State Fair August 29, 2011

I walked towards the exit to the encore: John Phillips Sousa’s “Stars and Stripes Forever”.

On the bus back to the east ‘burbs, I struck up a conversation with an old guy who’s an Army vet, WWII. “Pacific or European Theater?”, I asked. “Pacific”, he responded. His unit had spent two weeks in Japan immediately after the Atom bombs had fallen in August, 1945. “Terrible there”, he said, and that was about it. I told him about Uncle Frank and the Arizona at Pearl Harbor, and about a whole family of military veterans, including me.

So it goes in the “land of the free and the home of the brave”. It’s hard to deny that “War is the Force that Gives Us Meaning” as so well articulated by Christopher Hedges in his book of the same name (the link is to a talk he gave at the University of California Santa Barbara a few years ago).

Peace hardly has a place at the table in the national conversation even though it has always been an underground topic of the human conversation. I just completed reading an outstanding book which was not about war and peace, but an amazing amount of conversation in this autobiographical love story* of photographer Alfred Stieglitz and artist Georgia O’Keefe was about feelings about World War I, the war raging when they met. But these were private conversations. The public conversation then was reverencing War and Soldiers and Right and Might in that spectacularly misnamed “war to end all wars”.

Indeed, there is hardly any place for public conversation about the virtues of peace. I have found that peace people, while representing the dominant feeling of people yearning peace, are marginalized and isolated. If your ethic is peace, it is impossible to intellectually engage with someone whose investment is in war.

I am part of a group seeking a monument to Peace in the city of War Monuments, Washington D.C. It is very slow going…though in the end, it will either be Peace or Perpetual War and Death.

Why not Peace? I have a theory.

Recently, as anyone watches the news is aware, there has been an overthrow of the Qadaffi government in Libya. There has not been, to my knowledge, a single American life lost in that war.

There are many pieces of conversation about whether that War is right or wrong, but I have particularly noticed the position, delivered through Sens. Lindsey Graham and John McCain, that the Libya campaign has been a “failure” for President Obama and the United States. No one says this out loud, but I think the reason such a war is deemed to be a failure is that there were no deaths to, in a perverse way, celebrate our fallen American heroes and stir up patriotism.

A foolish theory? I think not. To each their own opinion.

* – My Faraway One, edited by Sarah Greenough