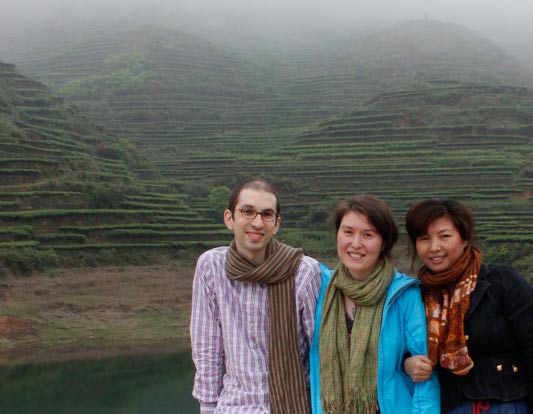 For David and Lily Duckler, owners of Verdant Tea, a cup of tea isn’t steeped in oriental mystery or buttoned up with rigid etiquette guidelines, instead tea is all about hospitality, and brewing a pot of tea is an invitation to sit and enjoy the leaves. Its simply “about leaves and water and a good brew,” explained Lily.

David and Lily spent several years in China learning about tea direct from the source – tea farmers. And they have been selling tea grown at four farms in China through Verdant Tea’s online store. But it was a desire share the welcoming Chinese tea culture they experienced in their travels that lead them to open their new tea house in Seward.

“We’re not trying to create this super exotic far east experience,” explained David. “Because that’s not how tea feels when you drink it in China. It’s not supposed to be mysterious. It’s supposed to be something you can make a part of your every day life. And we have been thinking for three or four years, since we got back from China, how do you translate that experience of drinking tea on the farm with the farmer into an experience here in the United States? And I’ve realized that nobody has successfully translated that. The sense of hospitality and humility of the tea farmers.” 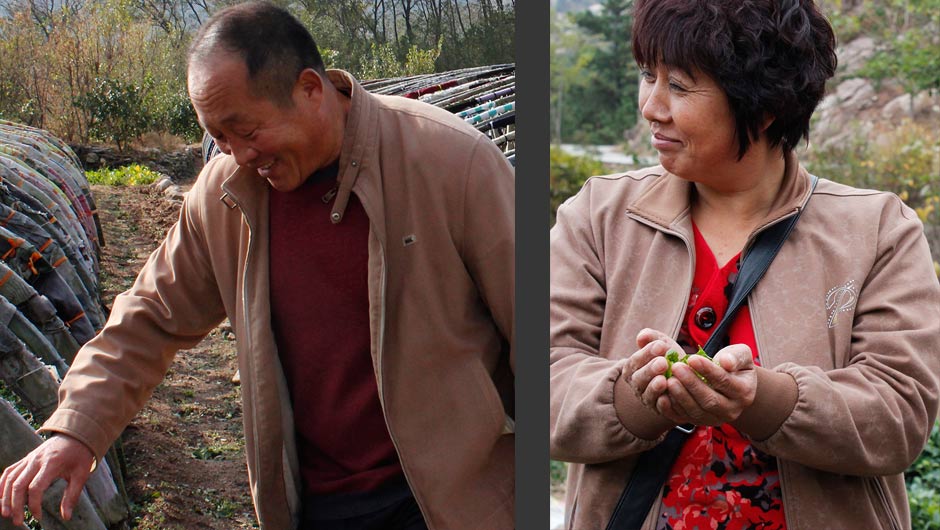 From left, Mr He grows green, black, and oolong tea in Laoshan Village. Mrs. He holds tea leaves. Lily, with a background in video production, uses imagery and video to connect customers with the tea farmers. “We want to be as invisible as possible, we feel so often that we work for tea and the people who make tea, and it’s our job to as translators, melt away,” said Lily. “When you look at where some of this tea was grown, you can understand why it tastes the way it does…it makes perfect sense. It’s no longer an oriental mystery of where all of these crazy flavors come from, it comes naturally from the place where it’s grown and the people who process it.” Images courtesy of Verdant Tea.

Owning a tea shop is the last thing that David thought he would ever do when he first moved to China as a student. But he passed by tea shops on his walk to the university, and the unique tea wares on display piqued his interest. “Eventually, I decided to go in and see what it was all about,” he said. Stepping into the shop, the dizzying pace of the streets faded away. “You go into the tea market, and you start walking around and the first thing somebody says is ‘please, sit down.’ They don’t ask you what you want, they don’t ask you how much you’re willing to pay for it. They just start brewing you tea and they chat, they want to learn about you.” He added, “What I fell in love with wasn’t the flavor of the tea to start out with, but it was this shocking revaluation that everyone in the culture of tea extends such a warm welcome to everybody who comes to visit them and how tea just makes people stop in the middle of a fast, long, busy day and appreciate the beauty of leaves in a glass.”

David was able to take a deep dive into the Chinese tea culture while working on a grant-funded project that allowed him to interview tea farmers, collecting folklore and stories about tea with the goal of preserving and sharing them. “I went to people’s farms and they welcomed me into their homes, and we ate meals together, shared stories together,” said David. “And that’s the basis of the relationships with the farmers that we now work with.”

David added, “I think if I were to start a tea company today, if I had to go find small farms to work with, doors would all be shut to me because you’d be going there as a business person and there are such complex rules about what can be imported and exported and they make plenty of money without having to export tea, they don’t need the business. But to call them up when I did and ask them if they’d be willing to let me buy a little of their tea, they were really excited for me and excited that I could share the tea on that level.”

David and Lily moved back to China for a year to teach English at Qingdao University. In their free time, they became students in the informal classroom of the tea house. David explained, “We got a lot of training on how to taste tea, how to brew tea.” David even took it upon himself to just drink one kind of tea – rolled oolong – to learn everything he could about it. “I learned from the tastes what altitude it was grown at and what the weather was like when it was picked,” he said. 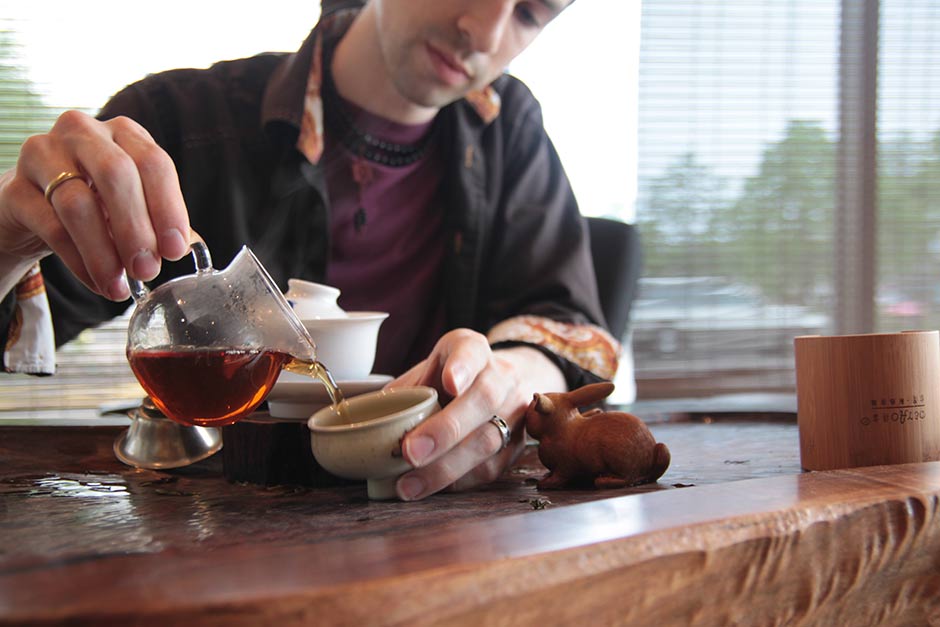 David pours a cup of tea. The water used at the tea house is from the Schmidt Brewery well in St. Paul. “It’s our responsibility to give people the best first experience that we can even if it’s not as easy to replicate at home, which it really is,” said Lily. “Since [customers] are coming here for a taste experience we might as well do it right.”

Lily and David visit their tea farmer friends in China several times a year, and when they went on their most recent visit this spring they wanted to get an answer from the farmers to one of the top questions they get from customers – Is the tea organic? “What a lot of our customers have asked us about is [if] this tea is organic,” said David. “This time we decided we really wanted to get a lot of video of footage with the farmers… asking farmers, ‘Is your tea organic?’ and ‘Do you use pesticides?’ Everybody’s first response is to laugh. Sort of a bewilderment, like ‘Why would I do that? Why would I take something that is perfect, right from nature, has the best spring water in the world, this beautiful soil, and add stuff to it? It would ruin the taste.’”

Lily added, “There’s a really practical reason for it, too. Tea is extremely valuable and also tea acts a little like baking soda in that it absorbs the smell and the flavor of anything put near it. So if you’re going to get the true value out of your land and out of the crop growing on it, where you can only get however many pickings a year, you’re going to do everything you can to make sure that that flavor is the natural flavor of the tea and of the land, rather than having it absorb the taste of fertilizer.”

Instead of chemical fertilizer and pesticides, the tea farmers have a natural solution to keeping bugs from devouring the precious tea leaves – soy beans. “What they’ll do is plant rows of soy beans between tea rows,” said Lily. “Insects would much rather eat soy leaves than bitter tea leaves. At the end of season, they mulch the soy into the soil for a fertilizer, which gives the tea that hearty, oatmeal flavor.” 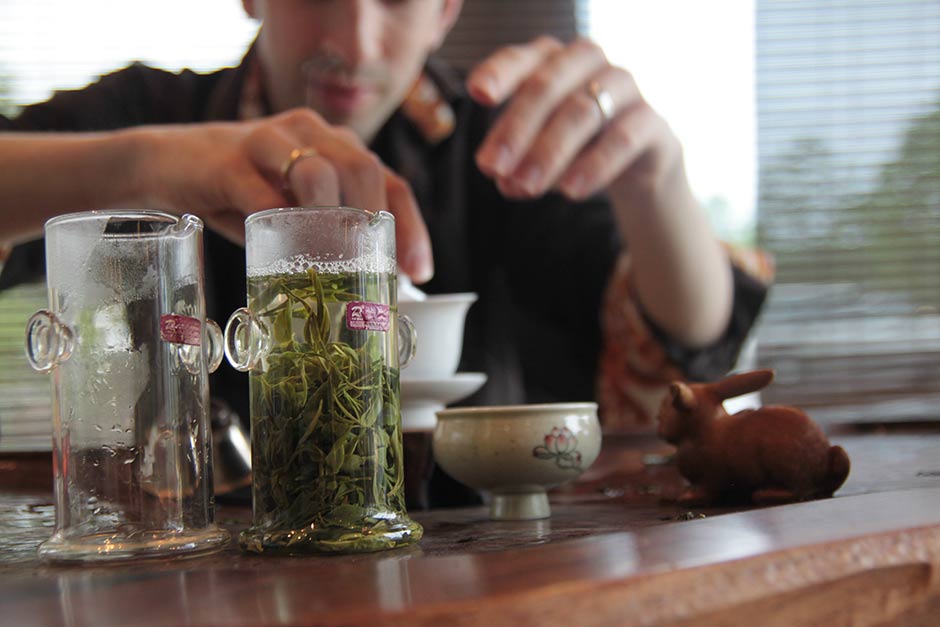 The tea on it’s own can speak for itself. James Norton of the Heavy Table recently wrote, “Its quirky but delightful flavor qualities (which depending on the variety can include surprising suggestions of chocolate, butter, or vegetables), make it an understandable obsession.” It also receives high marks in online reviews.

To build on the culture of hospitality, they’ve invited local business owners into the space to collaborate with them using tea as the commonality. Birchwood Cafe is working on developing a menu that will pair well with the teas, Sweet Science is developing tea-infused ice creams, and Real Deal Chocolate is working with the leaves to create tea-flavored truffles. 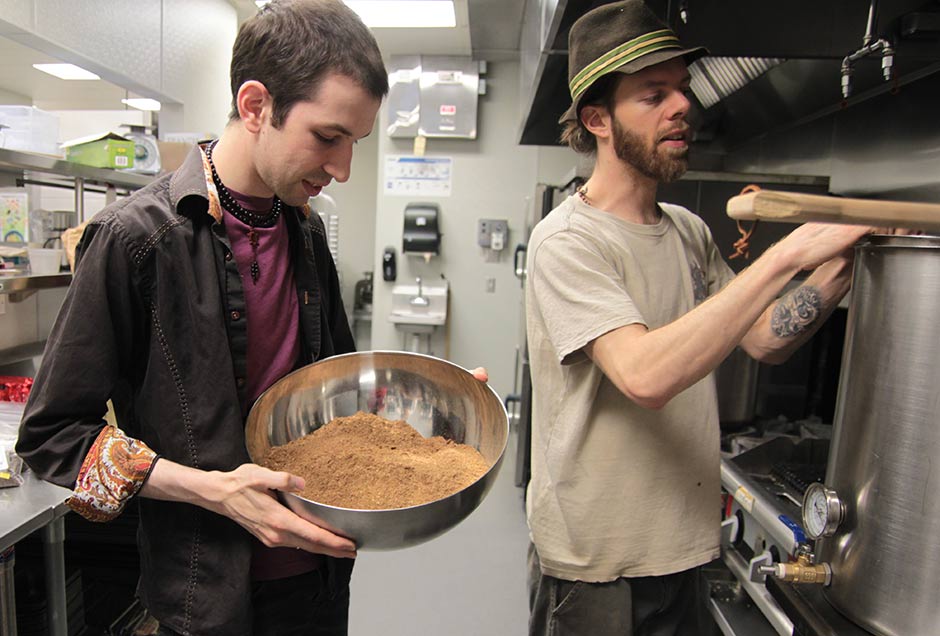 David and Lily have also invited a local kombucha brewer into the shop to hold classes, a yoga instructor will lead yoga sessions, the space will be available for meetings and book clubs.

“The idea is that this space will be a really active, energized hub for the community, and that’s what it was,” explained David. “The Seward Co-op was here and this end of Franklin Avenue had all of the energy that the Seward Co-op brought into the building, and then the building had sort of struggled to find meaning. What we really want is to revive that sort of excitement over on this side of Franklin.” 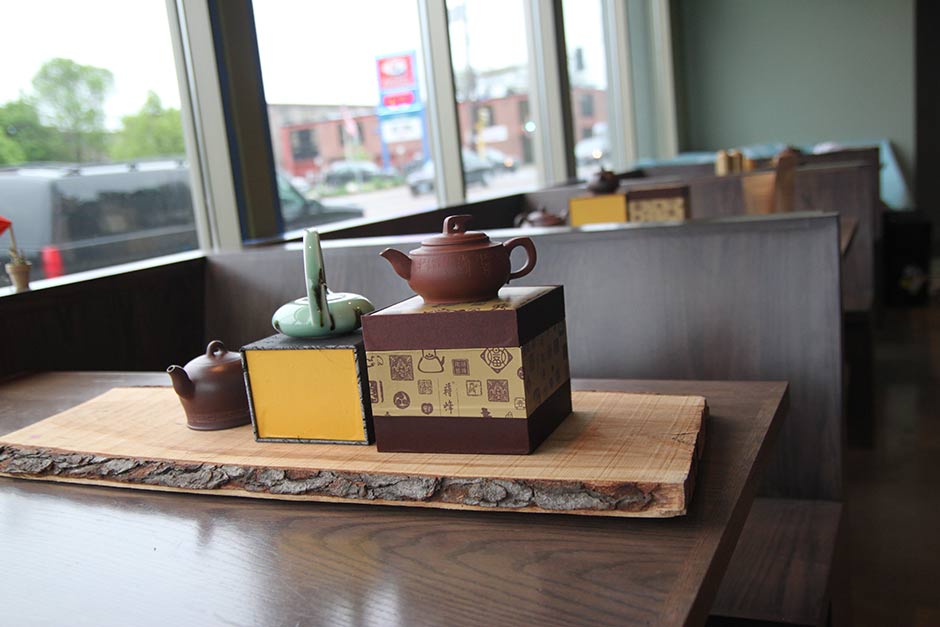 Originally, Verdant Tea was just going to be a tasting space. Keeping open minds, David and Lily have allowed the space to grow into something much bigger.

“This is a sort of a stretch, but my original interest in China that got me into tea was Daoist philosophy,” said David. “The idea is to be open to anything, to be open to opportunity, where you have your goals and you have your things that you want to share, but you’re also not devastated if things go a different direction…. We’ve tried to have that sort of attitude, and by being interested in that sort of collaboration people have just sort of found us.”

“It turns out that the same thing that usually makes the most people happy and excited and satisfied is usually the right way to go,” said Lily. “Do the right thing, and people will be happy.”

It is located at 2111 E. Franklin Avenue, Minneapolis, and will host a grand opening celebration during the first weekend of July. 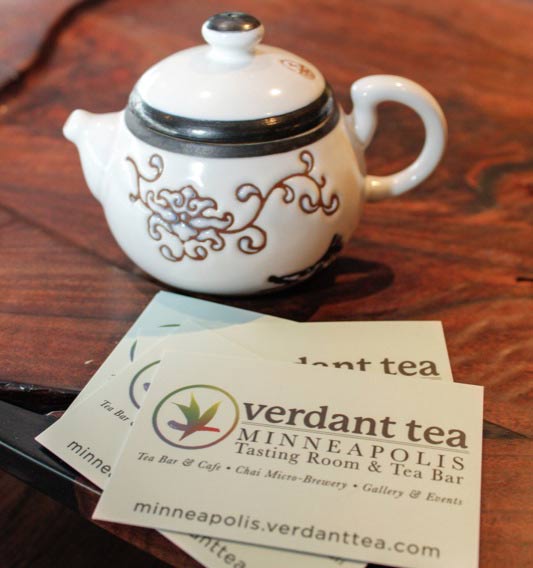