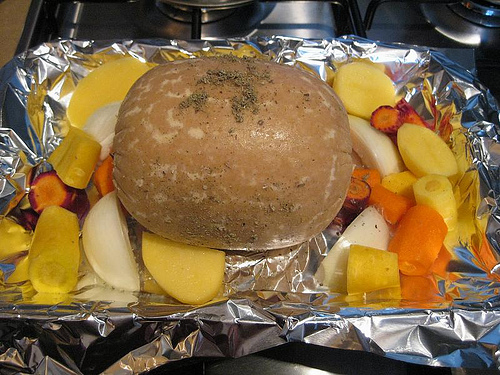 I still remember my first holiday meal disappointment after becoming a vegetarian 16 years ago. I had called ahead and asked my grandmother to please bake some of the Thanksgiving turkey stuffing outside of the bird so that the juices wouldn’t mingle with my stuffing. When I arrived to the meal I was relieved to see that she had baked some of it in a separate glass dish — only to be disappointed moments later when I learned that all of the stuffing had been made with chicken broth.

Vote on what YOU want as a vegetarian at the holiday table.

“How could she have done that?” I thought to myself. As a hormonally-influenced and admittedly judgmental teenager at the time, I suspected foul play (no pun intended). “It must have been on purpose. She just can’t accept me being different,” I fumed, “Why else would she have done that? The whole point of removing the stuffing was to prevent poultry juices mingling with it, and then she just dumped in poultry juice on purpose!” In hindsight I am certain that my grandmother hadn’t realized what she had done, and she also probably hadn’t thought of an alternative way to moisten the stuffing since I was the first vegetarian in my family.

Now that I have more years of experience as a veggie I calmly confront situations such as this, having realized that meat eaters often just don’t see foods the way we do. Why just yesterday I walked into my future in-laws’ kitchen, inquiring as to what I could prepare for myself without meat, and was asked, “You don’t eat liver, do you?”

My advice to new vegetarians, should a culinary misunderstanding occur, is to gracefully and patiently explain the situation, rather than assuming that the mistake is intentional. For those hosting vegetarians at a holiday meal for the first time, I recommend asking careful questions about their diet. Can they eat dairy products or eggs? Do they object to trace amounts of meat products such as those found in gelatin or chicken broth? PETA offers helpful recipes and holiday meal tips for substituting products that may be objectionable to vegans, such as vegetable broth for the stuffing, mushroom gravy instead of meat-based gravy, egg replacer and soy milk when making breads, and so on.

Another strategy that has worked for me is to offer to help or outright make the main course so that I can ensure no meat products are used. So what should that main course be? Two vegetarian holiday meal options were put to the test in researching this article and apparently are almost equally popular:

Vote on what YOU want as a vegetarian at the holiday table.

If you have favorite vegetarian recipes for holiday meals you would like to share I invite you to post them in the comments section. Lastly, whatever your dietary preferences are, I wish you a tasty holiday season and hope that differing views on meat consumption won’t interfere with your enjoyment of holiday meals!