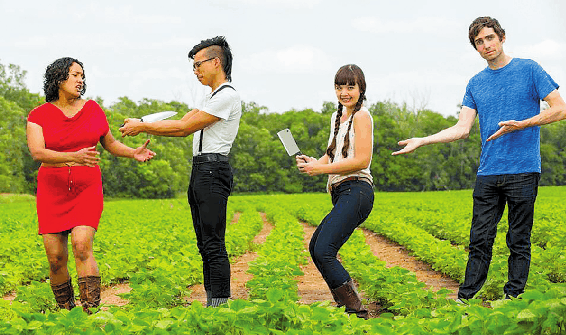 (Photo courtesy of the Herbivorous Butcher, by Jonathan T. Armstrong)

A new business could be opening in Northeast Minneapolis thanks to donations from a Kickstarter campaign; licensing and lease negotiations are the next hurdles.

The Herbivorous Butcher first appeared at the Minneapolis Farmer’s Market in June 2014. “We didn’t think we would sell anything the first day. By the end of the weekend, we had sold everything we made,” one of the owners, Aubry Walch, said.

Aubry and co-owner brother Kale Walch, run the business along with two employees and their mom who helps them cook one day each week.

After selling out at each event they attended and receiving lots of feedback that customers would like to have more access to their product, the Walches decided that it might be time to look into finding a permanent location for their own vegan butcher shop.

They have been renting space out of a community kitchen where they are able to cook one day each week with only 6 stove burners to use. With the amount of care that they put into each of their products, Aubry Walch said in an interview with the Northeaster, they feel that having only one day each week to cook is not enough time to keep up with the demand.

In order to try to make the dream of having their own shop a reality, she did some research and found a recent Kickstarter campaign that had been successful for another local business. Ryan Strandjord was the brains behind that campaign and he agreed to help the Herbivorous Butcher.

According to the Kickstarter website, it is a funding platform for creative projects. Strandjord started and controlled the campaign throughout the entire process. When a campaign goal is reached, Kickstarter applies a 5% fee to the funds collected.

They set out with the goal of raising $50,000. They ended up exceeding their goal by raising a grand total of $61,806. It took only 28 days from start to finish with 715 backers for them to achieve their goal and to become the most successful vegan Kickstarter campaign of all time.

“The Kickstarter campaign ended on November 30. It was a lot more than we expected. I don’t even know that we expected to reach our goal,” Walch said.

The lease for their Northeast Minneapolis location is still in negotiations, but it should be signed within the next week or two if all goes well, she said.

“We need to get licensing and plans approved. Hopefully we can start construction by mid January,” she explained. “We’re going to have to gut the building. We’re going to be getting kosher certified. We’re also redoing the store front.”

The building has been vacant for about the last 3 or 4 years. They said that they hope that more businesses will move in close to them after their store opens. Once the store opens, their customers will be able to buy their products online and have them shipped directly.

Customers can catch the Herbivorous Butcher Sunday, Dec. 21, at the Linden Hills Farmers Market from 9 a.m.-4 p.m. After that, their products will be available for local delivery or pick up. Their products will also be appearing soon at Surdyk’s Wine and Cheese Shop in Minneapolis. They talked about maybe including some jerky and cheeses there.

“Our goal is to try to stay out of the co-op or grocery store. We want to keep our business with small batches so we know the food is fresh and it hasn’t been sitting there for days,” Walch explained.

What can customers expect from their future store? They will have a full section of vegan cheeses that are made from organic almond milk or soymilk with no preservatives. They make their own soymilk and feel good about the cheeses that they make from it.

It’s going to be a lot of sausages, deli meats, “meats” that taste like chicken, pork chops, turkeys for Thanksgiving, deli hams for Christmas, deli cheeses, specialty cheeses, sauces, marinades and meat rubs, and retailers from other vegan businesses.

Their store will feature take-and-bake dishes like lasagnas, chicken potpies and larger meals to feed a family. They will have a daily breakfast and lunch special that customers can grab on the go like a breakfast sandwich or burrito or soups and sandwiches for lunch.

For more information, check out their website at www.theherbivorousbutcher.com.